Scott Morrison has a good deal riding on Donald Trump winning re-election next year. During his week in the United States, the Prime Minister tied himself to the President to a remarkable degree.

Morrison will want the trip’s enduring images to be the White House welcome and the state dinner in the Rose Garden under the stars. And they are the markers that underlined the depth of the Australian-American alliance.

But the startling image was of Morrison and Trump on stage together at billionaire Anthony Pratt’s paper factory in Wapakoneta, Ohio.

No, that wasn’t a rally, the PM’s office insists. But Trump certainly made it look like one.

For a self-respecting Australian leader, this was beyond awkward diplomatically, and may be problematic at home. This year’s Lowy poll showed only 25% of Australians have confidence in Trump to do the right thing in world affairs. 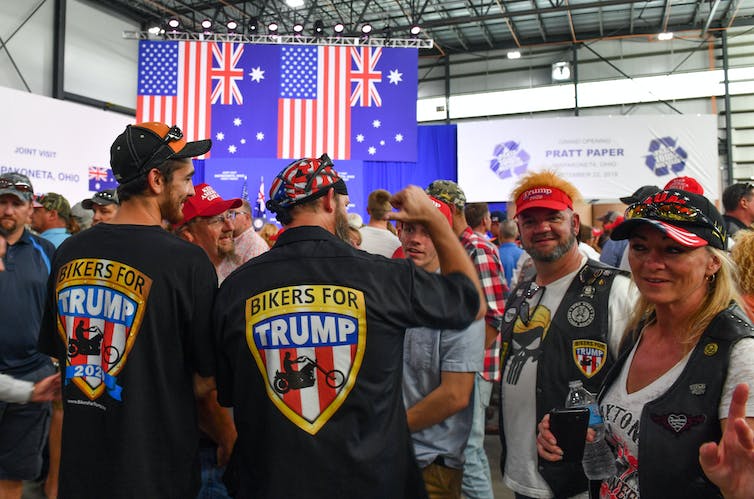 The crowd at the opening of billionaire Anthony Pratt’s paper factory, which the PM’s office insists wasn’t a rally. Mick Tsikas/AAP

That was, perhaps, something of a turning point in the visit. The Washington days were better than Morrison’s later appearances, which saw him open the China debate and having to defend Australia’s mediocre performance on climate change.

In sum, this has been a trip that will be rated a success but carry some costs. Notably, while reaffirming the alliance and bonding with Trump, Morrison has further annoyed our biggest trading partner.

The alliance was in fine repair already but there’s nothing like some face time in the Oval Office and formal-dress glamour to shout out its closeness.

Read more: Albanese slams Morrison for using a “loud hailer” to talk to China from US

While there may not be any specific requests on foot, there’s more credit in the bank for when either partner wants to ask a favour (as the US did recently in relation to the Middle East freedom of navigation operation, and Malcolm Turnbull did a while ago on steel and aluminium tariffs).

Getting close to Trump personally is something most leaders find difficult, and some mightn’t even attempt.

A conservative who won an unexpected election victory, the knockabout Morrison ticks the boxes for Trump. He’s appropriately and voluably grateful for presidential attention; he’s not a man whose charisma threatens to steal the limelight at a joint appearance.

Morrison was fully focused on Trump and the Republicans. Asked, after the Ohio appearance, if he’d felt he had been at a Trump rally and whether he’d reached out to the other side of politics during his trip, he said, “Well, I have been here to see the President – that was the intention”.

We’ve yet to see the longer term implications of the Morrison remarks on China, delivered in his major foreign policy speech in Chicago (where he was avoiding the New York United Nations leaders summit on climate).

His declaration that China has reached the stage of a developed economy and should therefore accept the responsibilities of that status in trade and its environmental obligations, rather than enjoying the concessions of a developing one, was basically an elaboration of what he’d argued earlier at home.

But place and context are pivotal in foreign policy. Said in the US, with a posse of the Australian media in tow, and with Trump’s anti-China rhetoric at full force, Morrison’s words were amplified to high volume.

China has quickly cast Morrison as articulating the Trump position, hitting back in a statement from its embassy in Canberra. “The assertion of China being a ‘newly developed economy’ by the Australian side doesn’t hold much water. It is both one-sided and unfair. And it is basically an echo of what the US has claimed.

"It is true that China, through its own efforts, has made remarkable achievements in economic and social development over the past decades and become the world’s second largest economy. However, there is still a big gap between China and the developed countries in terms of overall development level. China still has a long way to go to achieve full modernisation.

"In a comprehensive analysis, China is still a developing country, which is widely acknowledged by the international community,” the statement said.

China already has Australia in the so-called deep freeze. Morrison would like to visit – there has not been a prime ministerial trip to Beijing since 2016. But as the PM has pointed out, he can’t go without an invitation. His analysis won’t help with that. Morrison’s assertion that a meeting between Foreign Minister Marise Payne and her Chinese counterpart on the sidelines at the United Nations showed “that relationship continues to be in good shape” didn’t cut it.

Climate was always set to be difficult for Morrison on the trip, because the UN leaders’ summit on the issue fell neatly between his commitments in Washington and his speech to the UN General Assembly. But he didn’t want to be there.

The government tried to justify his absence on the grounds that only countries announcing new plans received a speaking spot. But that wasn’t an adequate excuse for Morrison not turning up, sending Payne instead. His no-show simply reinforced the criticism of Australia, which has seen rising emissions over the past several years, after the carbon price was scrapped.

Read more: View from The Hill: What might Lily and Abbey say to Scott Morrison about Greta Thunberg?

Morrison used his address to the General Assembly to defend the government’s actions, declaring “Australia is doing our bit on climate change and we reject any suggestion to the contrary”.

He talked a good deal about Australia’s efforts on plastics waste, including “plastic pollution choking our oceans”. Embarrassingly, his speech coincided with the Intergovernmental Panel on Climate Change releasing a report about the urgent need for action to contain rising ocean levels. 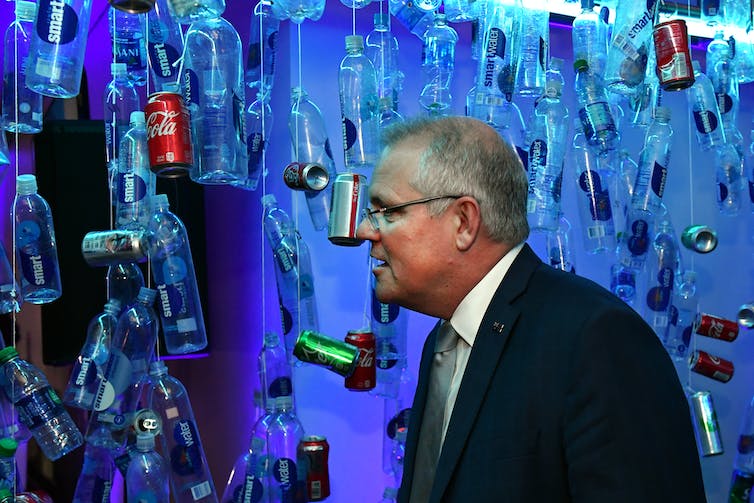 Morrison insists Australia is ‘doing our bit’ to tackle climate change, and talked a good deal about efforts on plastic waste in his speech to the UN General Assembly. Mick Tsikas/AAP

As Morrison’s foreign policy continues to emerge, this trip has highlighted his priorities and approach.

Specifically, that he operates on an America-first basis and he has translated that to a Trump-first one. Never mind the unpredictability and idiosyncrasy of the President (and now the attempt to impeach him) - what’s needed is connection. Turnbull, who also sought to get close to Trump personally, pitched to him as one businessman to another. Morrison, having been picked by Trump as a favourite, has struck a mutually useful easy familiarity with the unlikely leader who mobilised the quiet Americans.

When Morrison gave his big trade speech in June, the line from the government was that it was not choosing sides between the US and China (though it did seem to be and it always appeared inevitable it would). After his American trip both the US and China are in no doubt which side Australia is on.