Greater Tokyo took a major hit earlier this month from Typhoon Faxai, which stopped regional transport and knocked out power in the eastern prefecture of Chiba.

Ever since the hit, some media coverage has highlighted the difficulties Japan has in coping with the disaster. There were delays in restoring lifeline services (electricity and water) and this week attention shifted to the plight of local authorities trying to deal with the debris.

But this obscures the typhoon’s impact on visions of how Japan can best cope with ageing, population decline and other sobering challenges.

Read more: 'Transformer' rooms and robo-furniture are set to remake our homes – and lives – before our eyes

Japan’s choices are often simplistically represented as either denser cities or regional dispersal. The former is portrayed as coldly technocratic spatial planning and the latter as the road to an idyllic, sustainable, community-friendly utopia.

But there is a middle option: cities that are both spatially compact and better networked through people, infrastructure and smart technology.

Artificial intelligence to the rescue

There have been numerous studies on Japan’s dilemmas. One of the most innovative was a 2017 artificial intelligence (AI) experiment by researchers at the Hitachi Kyoto University Laboratory.

To compare the merits of urban concentration versus regional dispersal, the researchers looked at 149 indicators of population growth, health, employment, happiness and so on. With these variables they generated 20,000 future scenarios covering the period 2018 to 2052.

In Japanese with English subtitles.

But the researchers also warned policymakers they had until roughly 2027 to decide on either urban centralisation or regional decentralisation. The AI simulation predicted a lock-in effect that would make it difficult to revert or change course after that time.

Yet the scale of Typhoon Faxai’s devastation has revealed Japan’s vulnerability in the face of disasters.

Chiba is only 40 kilometres east of Tokyo. Even so, the typhoon’s landfall took out a large part of the electricity grid, destroying or damaging an estimated 2,000 utility poles.

The extent of damage to infrastructure, especially in forested areas, delayed recovery efforts. A week after the storm about 67,000 of Chiba’s households were still without power.

This latest typhoon also hit less than a year before Tokyo hosts the 2020 Olympics. 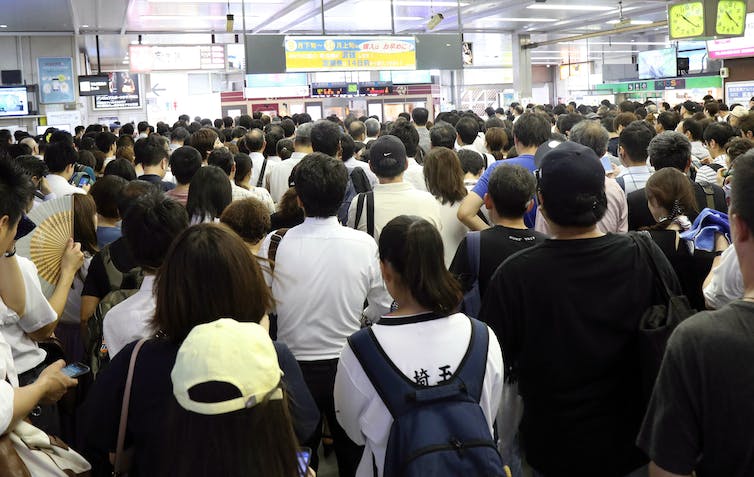 At first glance, Typhoon Faxai’s devastation might seem to confirm the argument for regional decentralisation versus urban density.

But this disaster is drawing attention to the middle ground between these polarised scenarios. For example, an article in Japan’s financial daily news Nikkei argued that a combination of disasters, population decline and ageing infrastructure may require a strategic retreat into compact and networked cities.

A similar argument was outlined in much greater detail in a report three years earlier from the Organisation for Economic Co-operation and Development (OECD).

Endorsing Japan’s 2015 National Spatial Strategy, the OECD highlighted the goal of promoting a compact and networked settlement pattern. The OECD pointed out that striking a balance between centralisation and decentralisation would help bolster cities without writing off the regions.

Under this strategy, three city-regions (Tokyo, Osaka and Nagoya) are seen as vital to national prosperity. Communities outside these metropolitan areas are encouraged to network with them to share health, waterworks, power and other essential services.

There are already indications Typhoon Faxai is accelerating the policies to realise compact and networked cities.

But more action is needed to alleviate the dangerous over-concentration of functions, such as government and business, in the Tokyo area. Typhoons are hardly the only hazard.

For example, forecasts indicate Tokyo is likely to be hit by a major earthquake within the next 30 years. The current effort to move functions out of Tokyo should be expanded.

Japan’s compact and smart cities also use eco-systems to mitigate disaster risk. For example, forests and green space are robust against storm and tsunami threats. This year, Japanese policymakers reached agreement on the need to emphasise disaster-resilient green infrastructure.

In contrast to Anglo-American climate denial, Japanese pragmatists respond to extreme weather events with measures that achieve both climate change adaptation and mitigation. Chiba’s reconstruction seems a good opportunity to ramp up this approach.

It’s often remarked that Japan’s multiplicity of challenges make it a place where the world should be learning how to use smart policy and natural assets to build resilience. Typhoon Faxai has revealed some of the policy-making terrain we ought to be looking at.