This article is part of a series examining the Coalition government’s record on key issues while in power and what Labor is promising if it wins the 2019 federal election.

What happens when an opposition party wins power? In theory, it adopts a more statesmanlike demeanour. If it doesn’t, it stays perennially narky, unwilling to accept others’ ideas, yet incapable of generating a positive way forward itself.

The alternate aggression and apathy of the Coalition in arts and culture since the 2013 election suggests it never abandoned its oppositional ways. Taking office just after Creative Australia, the national cultural policy Labor released too late to have much practical effect, the way was clear to reclaim the portfolio as one of bipartisan concern.

This had happened under Prime Minister John Howard, who responded to the game-changing influence of Paul Keating’s Creative Nation policy not by rejecting it, but by extruding its ambitions through traditional Menzies values.

Instead, the last six years has seen a combination of ministerial whim and purposeless economising. There has been an absence of strong policy initiatives, neglect of smaller arts organisations, and an undermining of trust in arm’s length agencies, notably the Australia Council for the Arts and the ABC. 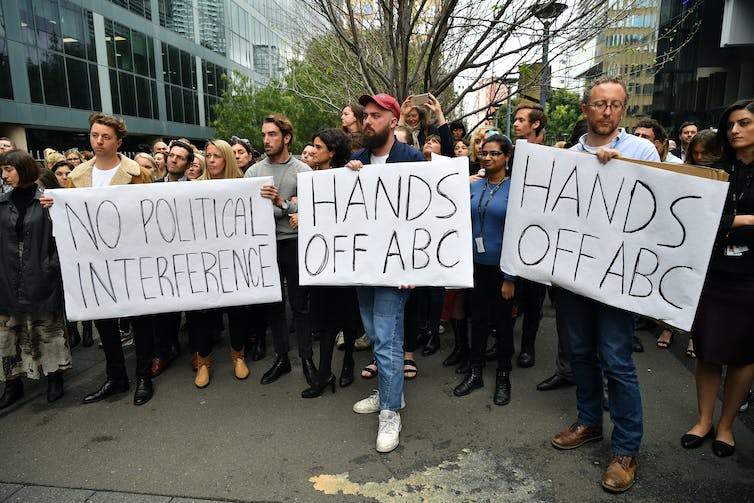 ABC staff hold a meeting outside their offices in Sydney in 2018. There has been an undermining of trust in the ABC over the last six years. Joel Carrett/AAP

Read more: Australian governments have a long history of trying to manipulate the ABC – and it's unlikely to stop now

The first Coalition arts minister, George Brandis, was an artistic conservative with a poor grasp of the sector’s industrial complexities. Mitch Fifield, the current minister, is an economic conservative with little time for its cultural complexities. The emergence of tech giants like Netflix and Amazon has changed the landscape of the arts, introducing a proliferation of new competitors for Australian creators – but the government has failed to keep up with these developments.

There has also been a resurgent populist politics with a nasty, xenophobic edge to it. As a mechanism for social inclusion, arts and culture appear to have passed the Coalition by entirely.

A space where nothing happens

All the government’s major cultural policy events have been regrettable ones: the spat over the 2014 Sydney Biennale, which saw Brandis threaten artists if they didn’t accept corporate sponsorship; the 2015 raid on the Australia Council’s budget to establish an ill-defined National Programme for Excellence in the Arts (NPEA); and a Senate Inquiry into the arts cuts with an unprecedented 1,719 submissions.

Then, with the accession of Fifield as minister, the rebranding of the NPEA as the Catalyst Fund, the dissolution of this body too, and the return to the Australia Council of most (but not all) of the money taken from it 18 months previously.

Figures for 2014-15 are hard to find, because in 2014 the Australian Bureau of Statistics canned its Culture, Sport and Recreation accounts in response to funding cuts. The burden of collecting cultural data then fell on the Meeting of Cultural Ministers Statistical Advisory Group – which had its federal administrative support removed in 2012.

Against this, the Coalition can point to recent investment in cultural infrastructure through the Public Service Modernisation Fund, and a A$8.2 million tip-in for collecting institutions. The National Gallery of Australia has received A$63.8 million to ensure, in the words of one arts bureaucrat, “the new Director doesn’t have a leaky roof and can buy the next Blue Poles”. Given the Efficiency Dividends scalped from galleries and museums in the past, however, this counts as little more than one step forward after two steps back.

The 2019 Coalition budget extends the ad hocism, with A$30.9 million for an Australian Music Industry Package, and sprinkled support for select cultural bodies, including the Bundanon Trust, the property Arthur Boyd bequeathed to the nation (that just happens to be in the Liberals’ most marginal NSW seat).

There is no return of money to the Australia Council or the Regional Arts Fund. In the words of Artshub’s Richard Watts the budget “demonstrates the Morrison government’s lack of interest and understanding of the sector”.

Read more: Missing in action: a vision for the arts in the 2019 budget

Most serious of all has been the damage done to the reputation and operation of the Australia Council and the ABC. Intentionally or not, both were harmed under the Coalition. Given their crucial role as protectors of our national culture, the consequences go beyond the immediate storms in which they were embroiled.

The main challenge facing an incoming Labor government is recognised in its pre-election manifesto A Fair Go for Australia: which parts of creative Australia remain applicable and which need upgrading? The arts and culture section juggles two sets of priorities. On the one hand, there is standard blah about “contribut[ing] to innovation and lift[ing] productivity”. On the other, there is new awareness of the urgent need to promote cultural diversity and connection in an age of democracy deficit.

These pronouncements are of the broader kind. Yet there are two specifics Labor might consider. First, ending efficiency dividends for arts and culture, which are not efficient and a dividend only if the public goods so targeted are not impaired.

Second, restoring federal support for the Statistical Advisory Group and the ABS’s Culture, Sport and Recreation accounts. I have been an outspoken critic of the datafication of cultural policy, but fit-for-purpose facts and figures are essential to meaningful evaluation.

Both resources are important for ensuring our next national cultural policy is truly cultural, national and bipartisan.