Protests from animal-rights activists around the country have drawn a swift national backlash. The Prime Minister has condemned the animal-rights protesters as “shameful”, “un-Australian” and, memorably, “green-collar criminals”.

It’s clear the protesters have touched a nerve, attracting derisive comments from both social media and mainstream outlets. While public inconvenience and disrupting understandably creates annoyance, this does not necessarily explain the strong reaction from Australians.

It is worth looking at other factors which may have also prompted negativity towards the protests, and why questions about our meat consumption can feel particularly uncomfortable.

Its clear from the widespread reaction to abuse in the live export industry that many Australians value animal welfare. Millions of Australian households also include much-loved pets, and less-cruel farm products like free-range eggs are growing in popularity.

At the same time, Australians eat vast amounts of meat. It is also clear that, whatever one’s views towards farming, it is very hard to guarantee the meat on one’s plate was killed in a “humane” manner.

The contradiction between enjoying meat but disliking the harm done to animals to produce it is called the “meat paradox”. 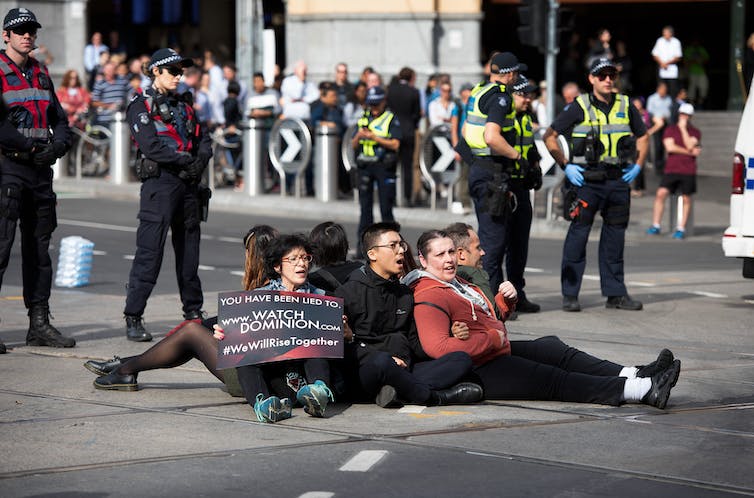 Widespread annoyance at the vegan protests goes beyond the traffic disruption. Ellen Smith/AAP

One way of reducing this dissonance is mentally disengaging from the origins of meat. If animals are not assigned a moral status, then slaughtering them no longer becomes a moral dilemma, and eating meat, therefore, is not morally problematic.

Another way we cope with simultaneously liking (or loving) some animals but eating others is to create categories. That is, cows, sheep and pigs are for eating but dogs, cats and horses are not. In this mental map, farm animals tend to be viewed as commodities rather than individual sentient beings.

We are also far more likely to feel empathy towards species we’re familiar with and can relate to. Pets have an advantage here, as they are often selectively bred for expressive affection towards people.

Read more: Why do vegans have such bad reputations?

Shock gets attention, not action

All of this together means strident campaigning for animal rights can provoke a strong and emotive backlash. Furthermore, it’s not at all certain this headline-grabbing approach improves animal welfare.

Shock tactics can effectively attract attention and (compared to less emotive messages) are more likely to be noticed, but they do not necessarily prompt action.

Although disturbing scenarios of animals undergoing cruelty and confinement might be eye-catching, these, alone, are not effective in changing attitudes or behaviours. 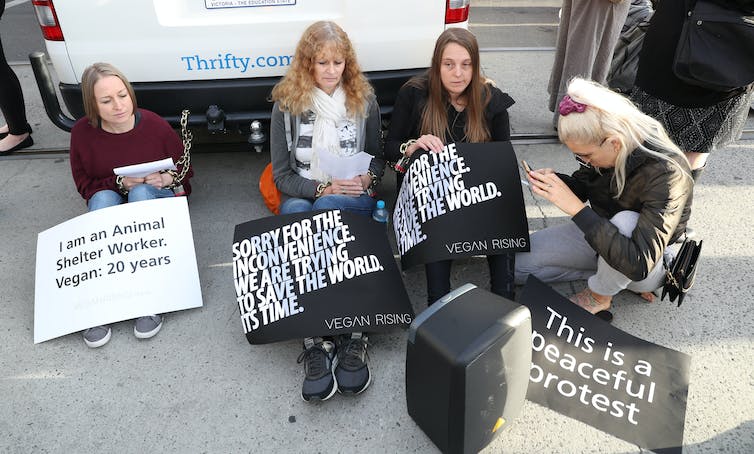 People have a limit to how many issues we can worry about at once and as worry about one risk increases, concerns for the others may lessen. Exposure to messages about animal cruelty can also create feelings of pain and loneliness and may also, paradoxically, result in avoidance to take any further action.

Instead, it is important to create a compelling positive alternative. In this case, this might involve showing farm animals free from any confinement and abuse, thereby communicating a vision to aspire to.

This might explain the success of Animals Australia’s “Make it Possible” campaign which offered its audiences a vision of hope by depicting a farm animal who broke free from the shackles of captivity. Results from this campaign revealed a drop in demand for factory-farmed products and a rise in ethical product purchases.

Read more: Should veganism receive the same legal protection as a religion?

This might also explain why reducetarianism or flexitarianism – reducing meat rather than cutting it out entirely – appears to be gaining traction. In my as-yet unpublished research on what Australians eat, one person told me:

when the Titanic sank, you don’t say ‘oh I don’t have room for everyone, throw everyone overboard, out of lifeboats!’ You do what you can.

I guess that’s the philosophy of reducetarianism, eating one bit of chicken a month is better than a person who eats it twice a day.

Australians can be empathetic towards animals. There’s also a slow – but growing – understanding of how the livestock sector is influencing climate change.

But research shows our immediate needs and demands - to feed our family, to eat familiar food, even getting to work on time – often take precedence over larger and far less visible moral and environmental questions.

Understanding and empathising with the barriers, needs and habits of people who do and don’t eat meat may go some way in bridging the chasm towards a more sustainable future.