Outbreaks of algae have killed up to a million fish in the Murray Darling Basin over the last two weeks. The phenomena of “algae blooms”, when the population of algae in a river rapidly grows and dies, can be devastating to local wildlife, ecosystems and people. But what are algae blooms? What causes them, and can we prevent them?

Microscopic algae are fundamental to life on earth. These tiny plants provide the fuel that drives marine and freshwater foodwebs, and via photosynthesis, they gobble up carbon dioxide to help counteract emissions, and provide us with oxygen to breathe. Besides rivers, streams, lakes, estuaries and the coast, they can also be found in diverse environments such as snow, soil, and in corals.

But when humans channel agricultural run-off, sewerage and stormwater discharge into waterways, we dramatically increase the amount of nutrients such as nitrogen and phosphorus. This creates an imbalance, because some microscopic algae are supremely effective at mopping up nutrients and can grow very quickly, dividing up to once a day and quickly overtaking other species. The result is an algal bloom. 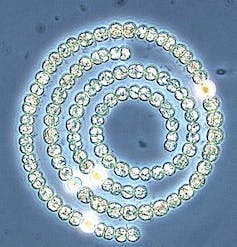 So why don’t we have algal blooms all the time? This is because algae don’t just require nutrients to grow. Like any plant, factors such as temperature and light availability are also important in determining how quickly algae grow and whether they form blooms. Blooms also need slow moving or still water to become established.

In Australia, our algal blooms are typically in freshwaters. The main group of algae responsible for this are known as blue-green algae, or more accurately, cyanobacteria. They regularly bloom in warmer weather in our reservoirs, lakes and slow flowing rivers. In 2016, for example, 1,700km of the Murray River was affected by an algal bloom.

There are many ways they impact the environment and economy. Some algal blooms are toxic, requiring expensive water treatment and – in extreme cases – shutdown of water supplies. This isn’t just a problem in Australia. In 2014, some 500,000 people in the US were left without drinking water due to a toxic algal bloom in Lake Erie.

The toxins can also affect domestic animals, such as dogs, when they drink contaminated water, and limit use of lakes and rivers for swimming, boating and fishing. Even when algal blooms are not toxic, they unbalance the food web, reducing the number of species of animals and plants.

They can also reduce oxygen levels at night, as they switch from photosynthesis (producing oxygen) during the day, to a process called respiration at night where they use oxygen. Low oxygen can stress and even kill fish and other animals if they cannot escape this.

At some point, algal blooms crash when conditions become unsuitable. The resulting dead algae break down, providing an ideal food source for bacteria. This is when waters can become smelly, often with a rotten egg smell. As the bacteria multiply, they suck the oxygen out of the water. At this point, oxygen levels become low both day and night.

If the area of low oxygen is extensive, such as a whole lake or many kilometres of a river system, fish and other animals may not be able to escape to more suitable oxygen levels, and major fish deaths typically occur. 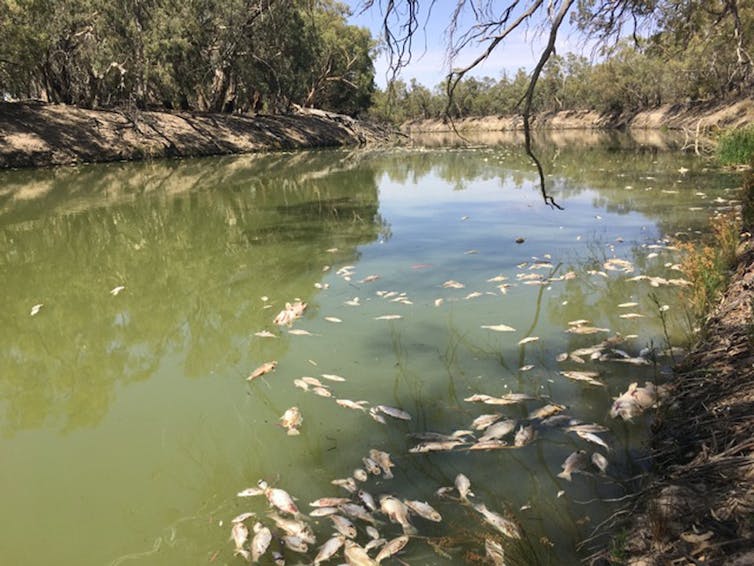 Some of the up to a million fish that have died in the Darling River system in far western NSW. KATE MCBRIDE/AAP

In other areas of the world, algal blooms have caused such severe oxygen conditions that thousands of square kilometres of ocean around the world are now known as dead zones, where no animals can live. These vast dead zones are not something we ever want to see in Australia.

There are a wide range of treatments that can be used to control blooms, for example, aerating the water, and adding clays and chemicals, but the catch is they are very expensive on a large scale.

Ideally, the problem should be tackled at the source. This means reducing nutrient loads to our waterways. There has already been progress on this in our cities where sewage treatment plants have been upgraded to reduce nutrient loads to waterways. But tackling nutrients coming from agriculture – erosion, fertilisers, animal waste – is much more challenging and expensive because of the vast areas involved. So this remains work in progress.

It’s also very difficult to predict when blooms will occur; despite being simple plants, algae have an amazing range of strategies to grow and survive. But as we learn more about their complexity our ability to model and predict blooms will improve. This is crucial to managing risks to water supplies and preventing major environmental effects, such as fish deaths.

Ultimately there are no quick fixes to algal blooms. Given the pressure we put on our waterways, they are here to stay. In fact they are likely to increase due to increasing temperatures and more extreme conditions, such as droughts. We know what we need to do to reduce the scale and likelihood of blooms: the challenge is devoting the resources to achieve it.