India’s urban population is growing. More than 50% of the country’s population is forecast to be living in cities by 2030. This is a major challenge for government because the country’s cities lack the infrastructure (affordable housing, roads) and basic services (sanitation, water, health care) for existing inhabitants, let alone the influx of people over the next decade.

Globally, one in eight people live in slums where they face issues of durable housing, access to safe drinking water and toilets, and insecure tenure. In India, one in every six city residents lives in a slum. 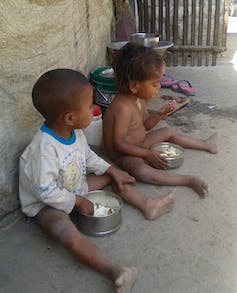 Many Indian children are growing up in very disadvantaged circumstances. These two live in Mahmudi Chak slum next to Rajendra Nagar Railway Junction in Patna. Sujeet Kumar, Author provided

However, estimates of slum populations differ widely in many Indian cities due to differences in the counting criteria. For example, in cities like Mumbai and Delhi, it’s estimated more than 50% of the population live in slums, but the 2011 Indian Census put the figures at 41.3% and 14.6% respectively.

Launching the national Smart Cities Mission in 2016, Indian Prime Minister Narendra Modi said: “… if anything has the potential to mitigate poverty it is our cities”. He said the mission, which has a target of 100 smart cities, aims to ensure access to basic services for the people. This includes houses for the urban poor. 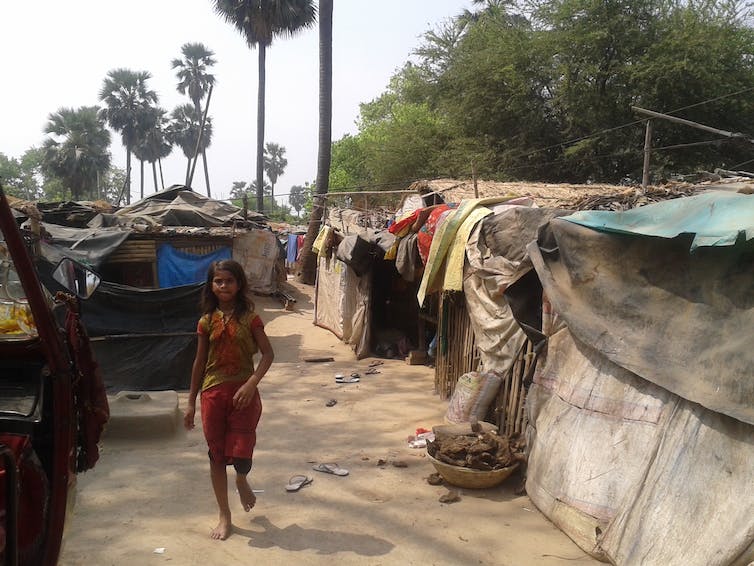 Smart city plan has a dark side

In one of the 100 cities selected for the Smart City Mission, Patna (Bihar), I witnessed the flip side of the smart city. Patna, the state capital of Bihar, has a rich history, but 63% of its population lives in slums. And 93% of them are from the historically oppressed “scheduled castes” and “other backward castes” (based on data collected in 42 slums). 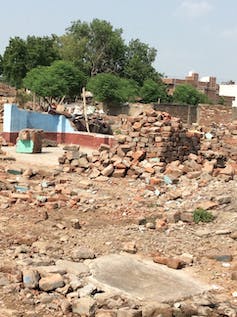 The city administration often demolishes slums without following due process of law in order to seize the land in the name of beautification and development of Patna.

In slums like Meena Bazar (near the famous Nalanda Medical College Hospital) and Amu Kuda Basti (near Patna Airport) people have been living there for generations in houses often partially funded by government housing projects. These have been bulldozed. 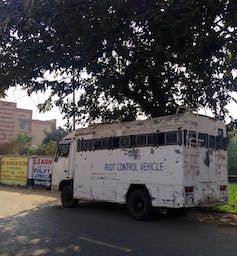 The city administration usually makes ad-hoc loudspeaker announcements before bulldozing these settlements. A massive police presence and riot vehicles are on hand in case residents protest the demolitions. They use derogatory language and forcefully enter houses and thrash male members, say women in Amu Kuda Basti.

The government could have given them more time or relocated them elsewhere in the city, rather than just bulldozing their houses, which they had built with hard-earned money, the slum dwellers said. 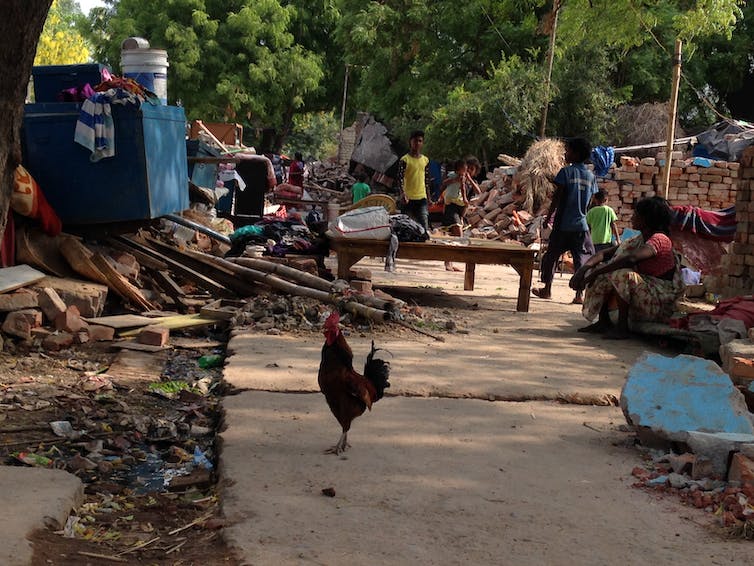 Residents of slums like Amu Kuda Basti say houses they built with their own hard-earned money are being demolished with little notice. Sujeet Kumar, Author provided

There is apparently reason to smash these homes. There always is. The usual arguments for demolition include: beautification of the city, construction of a government building or enterprise, extension of the airport, crime locations, governance, illegality, encroachment etc. The state says demolitions of such slums are necessary for the development of the city.

In 2011, the state proposed a slum policy to relocate slum dwellers who had lived in the city for generations to the outskirts in a plan to develop Patna and make it a smart city, says Kishori Das, an advocate for the rights of slum dwellers for years. Faced with widespread protests, the state deferred the policy, but it is silently applying it on the ground, he said.

Who speaks for the marginalised poor? 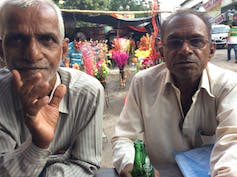 These two leaders from Meena Bazar are among 84 community representatives, elected and non-elected, interviewed by the author. Sujeet Kumar, Author provided

Local and mainstream media are not reporting these demolitions and forced evictions, especially when it happens in non-metro cities like Patna. Civil society and advocacy NGOs also take little notice of these frequent demolitions, probably due to threats to life and, if not, then to co-option by the state. The roles of the ruling party and opposition are also dubious.

Bihar has been ruled by leaders who attracted votes by campaigning on issues of poverty, caste and social justice for the past three decades. In the early 1990s, the prominent leader Lalu Prasad Yadav mobilised the poor and the oppressed caste groups under the umbrella of “Vikas nahin, samman chahiye” (we want dignity, not development). The present chief minister, Nitish Kumar, also known as Sushaasan Babu (good governance man), adopted the slogan “Nyay ke saath vikas” (development with justice).

However, the frequent injustices suffered by the urban poor negate the political commitment. These actions are also in conflict with the motto of the Indian Constitution, which frames justice as a balancing wheel between the haves and have-nots. 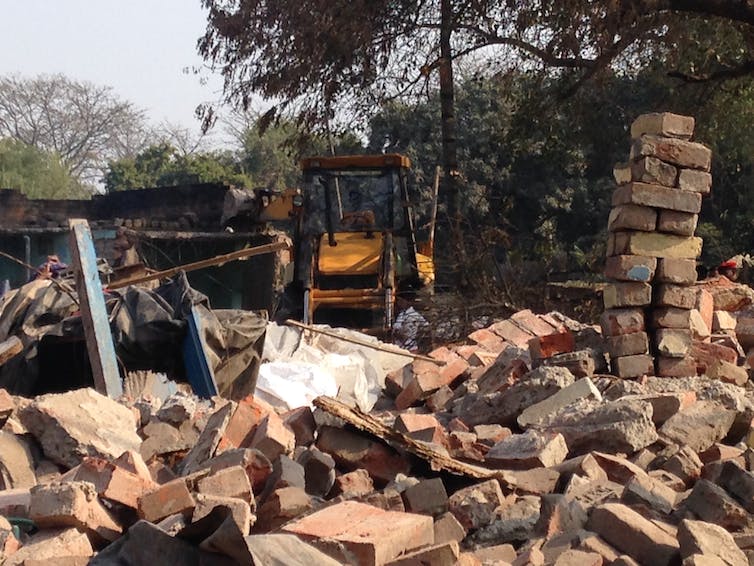 These challenges are not limited to one city. In the name of smart and developed cities, the government is not only taking over urban land where millions of the poor have lived for decades but is also acquiring fertile land and violating the constitutional rights of farmers, tribes and other indigenous groups in various cities.

These reports of struggle and forced evictions contradict the statements by Modi when he said smart cities development would strictly follow large-scale public participation in preparing these plans.

Such demolitions reveal a dark side to making Indian cities smart and cast serious doubt on claimed government commitment to the urban poor. These actions hardly live up to the idea of the rights of the poor. It became more challenging when the head of the biggest democracy in the world denounces those who speak up for the poor, oppressed and voiceless as “urban Naxals”.

In the words of Abraham Lincoln, democracy is “government of the people, by the people, for the people”. For India, this means the urban poor need help both from political parties and civil society so that their voice finds expression and their demands and concerns are heard and considered in public policy. 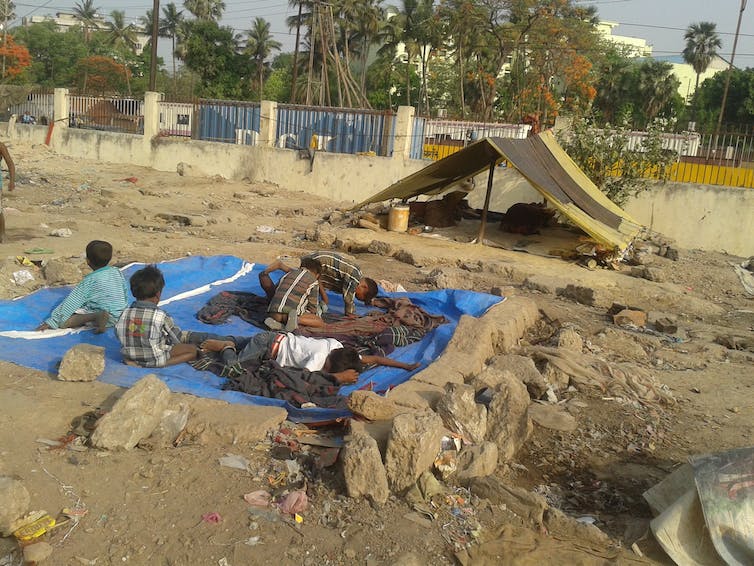 Children sleep out in the open in a slum area in Harding Park, Patna. Sujeet Kumar, Author provided