With the New South Wales government announcing that drought is now affecting the entire state, the federal government’s crisis assistance payments have been described by some as too little, too late. The National Farmers Federation has renewed its calls for a national drought policy and drought experts have expressed concern about reliance on emergency handouts.

With droughts predicted to grow in frequency and severity in the future, we need to support farmers and their communities to adapt to these changes.

To best support the well-being of farmers and farming communities, we need to support them not just when they are in the middle of a drought, but also when the rain comes and the dust has settled. An emergency response is important, but on its own is not enough - our farming communities deserve more. It needs to be accompanied by long-term coordinated support, delivered through the whole drought cycle, that helps farmers prepare for drought, cope with drought when it is happening, and recover rapidly afterwards.

Prolonged droughts harm the health and well-being of people in farming communities, although research also shows that not everyone is affected to the same extent, and some not at all. This means we need to learn from past experience in choosing what actions represent the best and most effective investments.

Providing farmers with emergency assistance when drought is at its worst helps to alleviate the most acute hardship. But multiple inquiries and research studies (see here, here and here) have concluded that this approach is not enough.

To truly support the well-being of farming communities facing the threat of drought, we need to invest more in actions that support their preparedness and resilience before drought hits, rather than waiting until conditions are at their worst before offering help.

Doing this requires breaking the “hydro-illogical cycle”, in which a severe drought triggers short-term concern and assistance, followed by a return to apathy and complacency once the rains return. When drought drops off the public and media radar, communities are often left with little or no support to invest in preparing for the next inevitable drought. 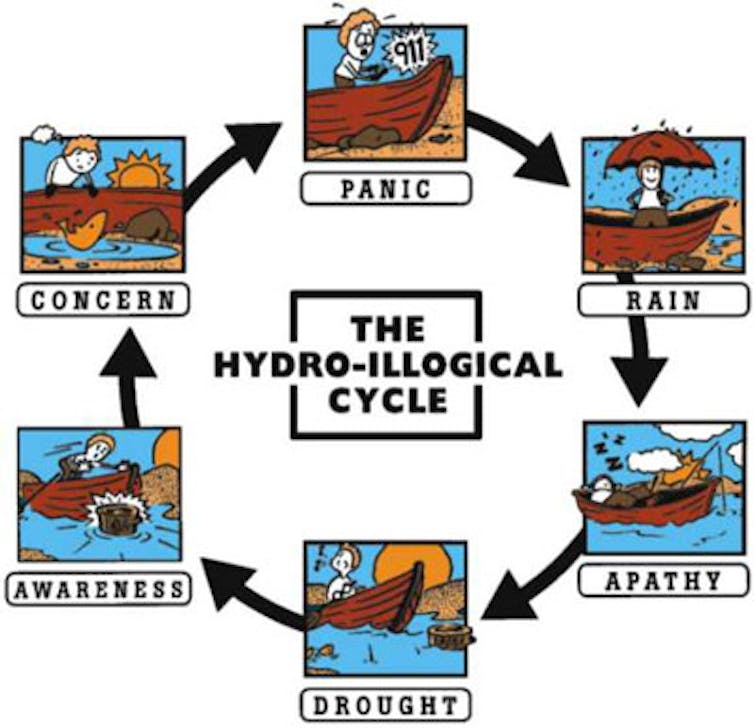 Farmers need proactive, long-term access to drought preparedness schemes well in advance, before the effects of drought begin to bite. Farmers who use programs such as the farm management deposits scheme, which allows them to put aside surplus income in good years and draw on it in difficult ones, have higher well-being during droughts than those who access emergency assistance provided during drought.

Our research has also identified some other ways to protect farmers’ well-being during challenging times. These include investing in forward planning for drought, supporting farmers to invest in “drought-proofing” measures suitable to their farm, and creating networks through which farmers can share their knowledge about what works to cope best with the financial, psychological and social challenges they face.

These things are not a “fix” for drought; a drought will always have significant impacts. But they can help reduce the severity of impacts, and the time taken to recover. However, to really be effective, these actions need to be invested in between droughts, in addition to investing in emergency support during drought.

We can learn a lot from the actions that farmers are already taking. Thousands of farmers have spent years investing in drought resilience, for example by changing pasture types and water management practices, and by changing how they plan for and manage periods of low rainfall.

This investment often goes unsupported and unrecognised, and has to be done among the ever-present pressures of challenging market conditions, low profit margins, rising costs, the need to repay debts incurred in the last drought or flood, and the myriad daily pressures of farming. We need to better reward farmers who make these investments, and to offer incentives for continued investment in this type of action between droughts.

One investment being made by many farmers across Australia is the adoption of regenerative farming, in which the entire farming system is re-oriented with a goal of better using natural ecosystem processes to support production, and of better matching production to land capacity through different climatic conditions.

Early research findings suggest that engaging in regenerative farming can improve drought resilience. But shifting to use of this approach to farming takes a lot of time and investment; before asking farmers to make fundamental changes to the way they farm, we need more research that critically examines when, where and how different farming systems can help safeguard against drought.

Read more: The lessons we need to learn to deal with the 'creeping disaster' of drought

As well as helping farmers invest in actions to increase resilience to drought, we also need to consider the best ways to support those who are suffering severe psychological and financial stress. For many farmers, supporting them to cope with drought and stay in farming is the best decision. But for others, the best decision can be to leave farming altogether.

The decision to leave farming is understandably one of the most challenging times in a farmer’s life, and often happens when their well-being is low and they are experiencing psychological distress. This means that the quality of help they receive during this time can make a big difference in how well they cope. Services such as the Rural Financial Counselling Service have a vital role to play at all times (before, during and after drought) in giving advice to farmers weighing up the agonising decision to stay or leave.

If you want to help farmers, keep supporting relief funds – they provide essential help during the worst of drought. But also tell your local politician that you support investment in long-term programs that help farmers improve their resilience to the next drought, and the one after that, and that recognise and reward the investments farmers are already making in doing this.

If we truly have our farmers’ well-being at heart, we should be taking drought action in wet years as well as dry, and in good times as well as bad.