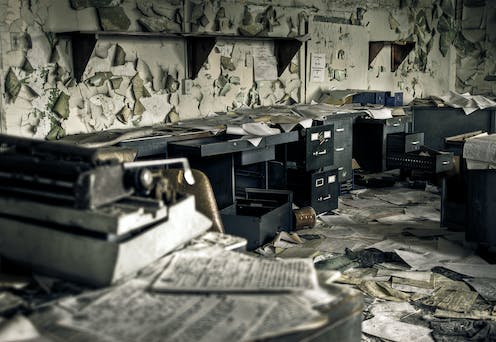 The typical office desk is home to over 10 million bacteria, 400 times more than a toilet seat. Other studies have revealed people don’t wash their hands, and surfaces from taps to elevator buttons are “officially dirty”.

Beyond the health concerns, this has an impact on our psyche. Humans have an inbuilt disgust response to dirty environments. A clean workplace has also been shown to reduce sick days and increase productivity.

People attending work while sick adds to the spread of disease and costs the Australian economy about A$34.1 billion each year through lost productivity. The cost of absenteeism in Australia is estimated at A$7 billion a year.

We are not as clean as we might think

This is especially of concern given the rise of open-plan and shared-desk workplaces. Workers in open-plan spaces have a 62% higher incidence of sickness absence than those in private or shared cellular offices.

Etiquette in shared-desk workplaces requires employees to clean down their workstation and equipment when they finish using it. However, less then half of employees comply.

Read more: How clean is your desk? The unwelcome reality of office hygiene

I once worked with a colleague who refused to touch any surface in a public toilet and would use gloves or paper towels to avoid doing so. Another colleague was so troubled by the toilet roll dispenser that he kept his own supply of toilet paper in his office.

This is understandable given that research has shown that under certain conditions we all behave like pigs. Both our environment and social norms influence our behaviour.

In one famous study, for instance, even people who said they wouldn’t litter were more likely to do so when the environment was already dirty or others were littering.

If workplaces are already dirty, it makes sense that no-one empties the dishwasher. We feel that it is not our responsibility as we follow the norm and behave in ways we normally wouldn’t.

The impact of a messy workplace

One study of 43,021 respondents from 351 office buildings found that cleanliness was be correlated with employee satisfaction. In two laboratory and field experiments, offices that were seen to be in proper order and had a pleasing appearance had positive outcomes for trust in the organisation and for learning.

Read more: How employers can design workplaces to promote wellness

On top of all this you have the health impacts of unhygienic workspaces. Viruses can survive for hours or even months on surfaces like phones and computer equipment.

In another study on the effects of a controlled increase in cleaning quality, researchers found that a cleaner office resulted in a 12.5% decrease in sick days and reported increases in productivity.

Not all communicable infections have vaccines, so overcoming the problem of dirty workspaces requires a bit of ingenuity.

Hand hygiene has been shown to be one of the most effective means of reducing the transmission of germs. In year-long random controlled trials, workplace hygiene programs that include education and the use of hand sanitisers reduced hygiene-related healthcare claims by over 20%.

Many organisations have implemented sanitation stations in open-plan and hot-desking environments to encourage employees to wipe down the desk, computer equipment and phone when they have finished using them for the day. However, a study has shown that less than half of employees use them.

This could be explained by research that found that hot-desking environments can lead to employees feeling indifferent to their coworkers and less committed to the organisation.

Some research has suggested that creating ownership can lead to increased responsibility and to people doing the right thing. This might include team ownership of different aspects of the work environment such as schedules for cleaning the kitchen.

While employees should be encouraged to stay home while sick, and the use of hygiene programs can have a positive impact, the uptake of these initiatives continues to prove challenging for employers.