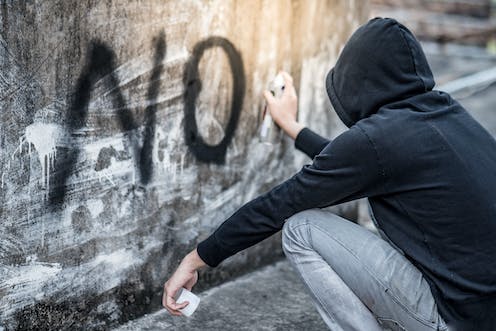 Under the legislation to be introduced later this year, the Youth Parole Board will be given the power to decide if offenders should be required to wear an electronic monitoring device and undergo regular drug and alcohol testing after serving their sentences.

Across Australia, intensive surveillance systems are increasingly being seen as a way to manage risk. New South Wales is currently testing in-vehicle telematics surveillance apps for all young drivers (18- to 25-year-olds), who are deemed at higher risk of accidents or committing driving offences.

Families and Children Minister Jenny Mikakos claims the Victorian monitoring measure is needed to ensure high-risk young offenders comply with their parole conditions. The scheme could be expanded if it proves successful.

Lack of evidence and exorbitant costs

While there is little Australian research into the efficacy of electronic monitoring of young people (or post-release offenders generally), the Jill Dando Institute in the UK has conducted a recent systematic review of research in various countries around the world.

Some aspects of the Victorian proposal align with the international evidence on likelihood of success. The review shows electronic monitoring can increase the likelihood of repeat offenders being caught, serve as a constant reminder to offenders of their parole status and conditions, and reduce peer pressure by limiting access to the people and places that might contribute to repeat offending.

In addition, the review found that several behavioural changes brought by electronic monitoring might contribute to a reduction in crime. These include offenders being able to remain at home with family support (rather than being incarcerated), participate in treatment programs, abstain from drug and alcohol use, and even secure a job and regular source of income.

However, the review found that electronic monitoring works best with just one category of offenders: sex offenders. When extended to broader “high-risk” offenders of all ages, there was no significant positive effect compared to non-monitoring.

The review also highlights the crucial importance of getting the implementation right. At this stage, little is known about how the Victorian electronic monitoring proposal would be implemented.

The right technology is vital. So, too, is the need to ensure strong data management and integration, which is problematic in Victoria. There also needs to be strong communication between a number of relevant agencies (an issue in Victoria), and detailed planning and program administration protocols prior to implementation (unknown at this stage).

The final issue is financial. The Victorian government has indicated an investment of A$2.1 million for an estimated 20 to 30 people in the initial trial phase of the program. This means at least $70,000 per person at the outset.

No doubt some of this money will be allocated to set-up costs for the monitoring system and wouldn’t need to be spent again in the future. But it’s still a considerable expense, and raises questions about whether the money could be better spent on other youth offender initiatives, such as drug/alcohol treatment, training and employment programs.

This “get tough” approach to young criminal offenders comes during an election year in Victoria, when “law and order” issues tend to dominate debate. But evidence-based research of what does and does not work is being pushed aside in this case. So, too, are the negative effects that can arise from these policies.

Rather than focus on which party is toughest on crime, a more progressive approach on “law and order” issues is needed. A permanent mechanism for reviewing criminal justice policies and procedures is one idea. I’d suggest an independent Criminal Justice Commission that evaluates policy initiatives in the run-up to each election and conducts five-year reviews of criminal justice policies.

Read more: Tough on crime: Victoria is not learning lessons from abroad

Too bureaucratic? Too academic? Australia already has a similar system for evaluating economic policy (the pre-election budget analysis) and five-year defence strategic reviews.

To its credit, Victoria Police tried to implement something like this with its “Blue Paper”, but that was quietly shelved. In any case, we need a systematic review of the criminal justice system rather than an agency review.

We can only hope that between now and the November state election there will be some effort to develop progressive criminal justice policies directed at holistic crime prevention rather than a focus on more intensive surveillance.

The idea that more surveillance can solve recidivism is misguided. It might be better at catching breaches of parole, but for what purpose? Certainly not for helping a young offender understand the effects of their behaviours, the harms they have caused, and the need to find assistance and a path to a different future.