We face a skeletal, triangular pyramid with a platform at the summit; the three vertices are three sets of steps leading up to it, hinting at the history, wonder and timelessness of mathematics before any of the performers appear.

They arrive. At first there is a cacophony as they all speak into microphones at once (evoking, perhaps, the big bang). Then, one-by-one, they deliver Newton’s three laws of motion, before physically representing or enacting them.

It is from this basic premise that The Mathematics of Longing, written by playwright Suzie Miller, follows. In a series of vignettes, the performers first read out a physical or mathematical idea before repackaging it into either a situation conveying a human relationship or a more physical piece. Scenes delve into string theory, the theory of everything, gravity, and complex numbers.

Particularly effective are the scenes addressing string theory, which argues that the universe is fundamentally composed of tiny vibrating strings. In one, a couple get ready to attend their dead baby daughter’s funeral, In another, they are about to go to the same child’s christening. The script hardly changes, with nice work from performers Todd MacDonald and Ngoc Phan giving a very different energy and feel to the two scenes. 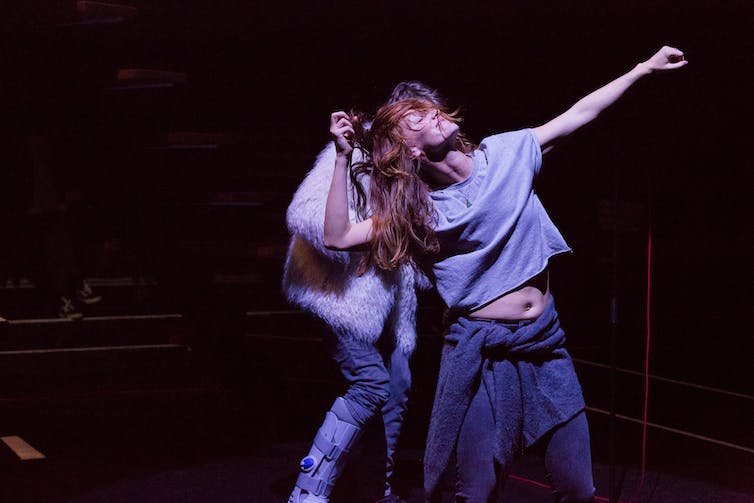 Gavin Webber and Kate Harman in The Mathematics of Longing. Art Work Agency

There are some stunning moments from Kate Harman and Gavin Webber as lovers who meet, fall in love and eventually part, each element of the relationship sharing a specific physicality from the weightlessness of the beginning of a love affair to the man’s displacement at the end.

And there’s a great string theory sex scene, with four actors playing one couple, showing how successful and unsuccessful the same encounter can be.

There are moments of magic. Todd MacDonald explains how we all fall in love with the blue sky and ocean, when in reality it’s the only wavelength of light that is reflected from these surfaces we are able to perceive.

In a piece towards the end, Merlynn Tong explains that the molecules of which we are all made, upon our demise, will be freed to join other entities, elements and the future. And so, in a very metaphysical way, we all really do get to live forever.

However it is hard to remain emotionally engaged as the vignettes break up any momentum. A scene will develop to the point when it really starts to take hold, but then it will be the turn of the next theorem and its associated scenes.

At the post-show discussion, the playwright Suzie Miller posited that the show was about grief, from the grief of actual death, to the death of a relationship, and even the death of innocence.

Still, despite my reservations, the production evoked delight; it is a visual feast with thought-provoking images. This new collaboration between La Boite, The Farm and The Uncertainty Principle delivers a work that poses fascinating questions linking science and humanity in a powerful and engaging way.

The Mathematics of Longing will be staged at La Boite until June 23.