What happens when you combine genetically engineered dinosaurs, greedy capitalists, and an erupting volcano? A lot of thrills, as experienced in the most recent dinosaur movie Jurassic World: Fallen Kingdom. It’s a different tale to the Jurassic movies we’ve been used to: a little darker, and updated for a modern world.

Humans learn from their past mistakes.

Chris Pratt and Bryce Dallas Howard are back as Owen (the velociraptor-taming rogue) and a wiser Claire, alongside faces from the original Jurassic Park movie in Dr Henry Wu (B.D. Wong) and Dr Ian Malcolm (Jeff Goldblum).

Read more: Why blasters miss their mark and other science stunners in Solo: A Star Wars Story

But bringing back dinosaurs from the dead and then genetically engineering them necessarily involves a serve of scientific magic. In this review, we dive into the scientific concepts behind some of the scenes to check whether they are dinosaur dung or movie magic.

Be warned: some modest spoilers lie ahead!

Chris Pratt not measuring up as well as he normally does. Universal Studios and Amblin Entertainment, Inc. and Legendary Pictures Productions, LLC.

Monster and dinosaur movies are notorious for getting the size of (real) creatures wrong, having inconsistent sizes throughout the movie, or even defying the laws of mass conservation.

So how does the T-Rex portrayal in Jurassic World: Fallen Kingdom stack up? Well, the largest T-Rex skeleton found to date is named “Sue” (although we don’t know if it was a male or female dinosaur).

We have Chris Pratt for scale, whose height estimates vary but is around 1.88 metres tall (he’s a bit closer to the camera than Rexy but let’s assume they’re the same distance for simplicity).

So that’s about 10% oversized. Factoring in the likelihood of there being T-Rexes larger than Sue (we have only found a small number of T-Rex skeletons, so it’s unlikely we’ve found the largest ones), and the extra skin and muscle, this looks like the film-makers have got the size spot on.

The giant prehistoric aquatic lizard Mosasaurus is also back, mixing it up with surfers this time.

The largest species of Mosasaurus reached lengths of 17m: so this is pushing the limits a bit more, at 25% oversized, but acceptable I think for storytelling purposes. I guess prehistoric creatures were sufficiently huge and crazy that even Hollywood didn’t feel the need to make them “larger than life”.

Verdict: Mosasaurus is on the money.

Up, up and away! Universal Studios and Amblin Entertainment, Inc. and Legendary Pictures Productions, LLC.

In one scene, a Pteranodon flies in, picks up a fully armed man, and flies off fairly effortlessly.

Now, we don’t have them around anymore, but we do have large birds of flight such as the bald eagle. The best estimates and observations of a bald eagle put its lifting power at around one-third to one-half of its body weight.

Pteranodon weight is apparently very difficult to estimate, with a range of 25-50kg: making it unlikely they could lift a 90kg male.

But the largest pterosaurs (bigger than in this movie scene) may have weighed as much as 180-250kg - making it plausible that they could, in full flight, pick up and carry an adult man.

Mosasaurus jumps well out the water as well in this memorable scene. This might seem an incredible feat, but modern humpback whales are only a little bit smaller and can get much of their body out of the water.

When the T-Rex wakes up, it snaps a chain connector rather effortlessly. Now the Rex is a massive (around 8 tonnes), powerful creature, but is this realistic, assuming the connector isn’t faulty?

It looks like the connector is held in place by a threaded screw – in which case we can examine the “thread stripping strength” of screws at which point the thread shears off and the connector fails.

Using a thread length of 50mm (estimate), an M8 bolt, and steel with a shear strength of 270MPa, we can calculate the required shear force using this calculator.

Now this weight is heavier than the T-Rex, but the T-Rex isn’t just hanging off the chain. It can exert a dynamic load which is a multiple of its weight: so it shearing the bolt and breaking the connector is quite possible.

Verdict: Off the chain action but plausible.

My mother always said: if the genetically engineered super predator doesn’t get you, the flows of lava will. Universal Studios and Amblin Entertainment, Inc. and Legendary Pictures Productions, LLC.

There’s a volcano at the core of the plot in the movie, and the main characters are regularly weaving their way in and out of lava flows while dodging dinosaurs. They’re often almost touching the lava, seemingly without any adverse consequences.

Calculating whether this is realistic is difficult: it depends on the size of the lava flow (which varies a lot in the movie), how close the person is, their clothing type, air flow, the angle of exposure, and a range of other factors.

But we can get a back of the envelope idea by looking at what people have done in real life, as shown here and here.

Given that the characters are spending extended periods of time seemingly only a few centimetres from the exposed molten lava, it seems unlikely they would have emerged unscathed like they do in the movie.

Verdict: No lava burn is a little bogus.

Jurassic World: Fallen Kingdom is nothing if not entertaining, and a spectacle to be viewed on the big screen. Some of the character development is a little frustrating and the plot has its usual share of holes, but if you sit back and enjoy the ride it’s a great blockbuster to take in this holidays. There are new dinosaurs to marvel at, and one or two plot twists that you might not see coming.

On the general science front, I was pleasantly surprised – the dinosaur sizes were often about right, as was the physics of the dinosaurs’ interaction with their environments (as best we can determine using modern science and animals). 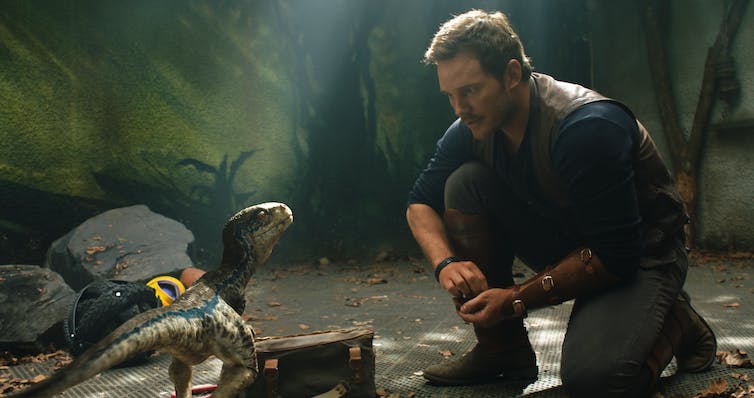