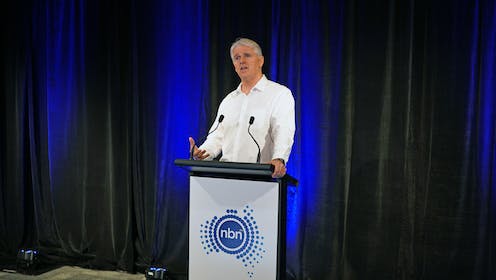 The government has strongly challenged the Telecommunications Industry Ombudsman (TIO) after its report showed complaints about services delivered over the NBN surged by 204% in the second half of 2017, compared with the same period a year earlier.

Fifield said the way the information regarding the 22,827 complaints about services delivered over the NBN was presented in the TIO report, released Tuesday, “could give the impression that responsibility for this figure rests with NBN Co”.

But advice to the government from NBN Co was that of these complaints, less than 5% were sent to NBN Co as complaints to resolve.

The NBN has been been heavily criticised for a slow rollout – although it says it has met every target for the past 14 quarters - low speeds and connection problems, generating high levels of complaints.

The six months to December saw a 39% increase in NBN premises activated.

The government and NBN Co are also focusing on the 16% fall in the rate of complaints about these services from the first to the second half of 2017.

In January to June of 2017, there were 19,683 complaints about services delivered over the NBN, making the picture better for the NBN when comparisons are made between the first and second halves of the year.

But the TIO report warns generally about comparisons of the two halves of the same year because of seasonal variations, preferring to compare the same period of each year. The government rejects the seasonal variation argument, saying the TIO itself has previously made comparisons within a year. It also believes the TIO is letting retailers off the hook.

The TIO is an industry-funded complaints resolution body. The NBN is not represented on its board.

The TIO report includes complaints for the six months to December covering mobile and fixed line telephony and both pre-NBN and NBN broadband.

It received nearly 85,000 complaints in total, which was a 28.7% rise over the same period in 2016. There was a 30.7% increase in complaints from residential consumers, and a 15.6% rise in those from small businesses.

Fifield said that no matter who was the responsible party, the complaints figures were too high. “The current model for protecting consumers needs reform”.

The review, to provide for the post 2020 environment, will be undertaken in three parts to ensure consumers

… have access to an effective complaints handling and redress scheme;

… have reliable telecommunications services including reasonable timeframes for connections, fault repairs and appointments, as well as potential compensation or penalties against providers;

… are able to make informed choices and are treated fairly by their providers in service, contracts, billing, credit and debt management and switching providers.

Meanwhile chief executive of NBN Co Bill Morrow will present an upbeat account of the network’s impact in a speech at the National Press Club on Tuesday.

He will say the network generated an extra $1.2 billion in economic activity in 2017 and is encouraging more women to become their own bosses.

Morrow, who is leaving his job at the end of the year, will present figures prepared by the economic advisory firm AlphaBeta, using census data, modelling and polling to estimate the impact of the network – labelled “the nbn effect”.

He will say that “nbn-connected women are becoming self-employed at twice the overall rate of self-employment growth in nbn areas.

"In percentage terms, these results are stunning. The number of self-employed women in nbn regions grew at an average 2.3% every year, compared to just 0.1% annual average growth in female entrepreneurs in non-nbn areas.

"If this trend continues, up to 52,200 additional Australian women will be self-employed by the end of the rollout due to the ‘nbn effect’”, he will say.

The 2017 overall $1.2 billion estimated increase in economic activity – through new jobs, businesses and greater productivity – excludes the economic stimulus of the rollout itself.

“By the end of the rollout, this ‘nbn effect’ is predicted to have multiplied to $10.4 billion a year,” Morrow will say. “This represents an extra 0.07 percentage points to GDP growth, or 2.7% of the estimated GDP growth rate in 2021. By the end of the rollout, the ‘nbn effect’ is forecast to have helped create 31,000 additional jobs,” Morrow will say.

The network is now more than halfway built. About one in three homes and businesses are connected. The rollout is due to be completed by the end of 2020. Morrow has been CEO since 2014.