The remote Pilbara region of northern Western Australia is one of Earth’s oldest blocks of continental crust, and we now think we know how it formed, as explained in research published today in Nature Geoscience.

The region is well known for its rich, ancient Aboriginal history extending over at least 40,000 years. It also features an incredibly diverse ecosystem, with many species found nowhere else.

The architecture of this ancient crust leads to a distinctive landscape as viewed from above, with light-coloured oval features that are granite domes surrounded by dark belts of volcanic and sedimentary rocks, known as greenstone belts.

This unique geological architecture bears witness to the history of our planet.

Billions of years ago

The Pilbara region began to form more than 3.6 billion years ago and our research supports the idea that its rocks were not formed through the plate tectonics processes that we see in operation today.

In plate tectonics, the outermost layer of Earth consists of fragmented, stiff “tectonic plates” that drift across the planetary surface, interacting at their boundaries. New crust is generated and destroyed at plate boundaries and this process is associated with most of Earth’s current volcanic and earthquake activity.

So why do the rocks in the Pilbara exhibit this unusual granite-greenstone geometry?

In our research we detail how these rocks formed, describing a series of “gravitational overturn” events that affected the ancient crust in the East Pilbara well before plate-tectonic processes began around 3.2 billion years ago.

What is a gravitational overturn? The young Earth was roasting hot. Its large heat content resulted in widespread volcanism. It was too warm for the rigid plates required for plate tectonics to operate.

Imagine retrieving a long-forgotten chocolate bar from your pocket, which then bends and drips over your fingers as you attempt to enjoy a snack. (Modern plates resemble a cold chocolate bar straight from the fridge: it does not bend and breaks when you want a corner.) 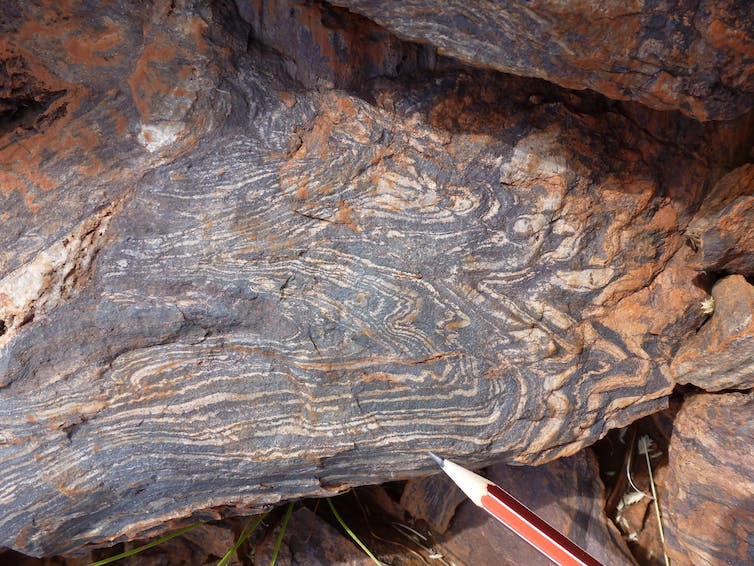 The hot early Earth erupted thick piles of basalt lavas that formed a dense crust barely supported by the underlying mantle. The base of this cooling crust experienced further heating from the hot mantle below until it started to melt, generating relatively buoyant granitic magmas.

This process led to an unstable stratification of the ancient proto-crust: low-density granites were overlain by high-density basalts. Due to the high heat, both layers could bend and flow, leading to instability.

The granitic blobs wanted to rise and the basalts wanted to sink. Scientists call the rising blobs “plumes” and the reorganisation process “gravitational overturn”.

In the early Earth, with its high temperatures and soft crust, the granites rose up through the crust where it formed buoyant stable crust, while most of the dense basalt crust sunk into the mantle. This process is preserved in the Pilbara as the oval-shaped granite domes and the preserved remnants of the basalt crust as the greenstone belts.

North of Marble Bar, by looking at rock fabrics, we discovered the remains of the oldest recorded gravitational overturn in the Pilbara. Intensely deformed rocks preserve traces of the ascent of a rising granite plume and the associated down-going of the dense volcanic crust. 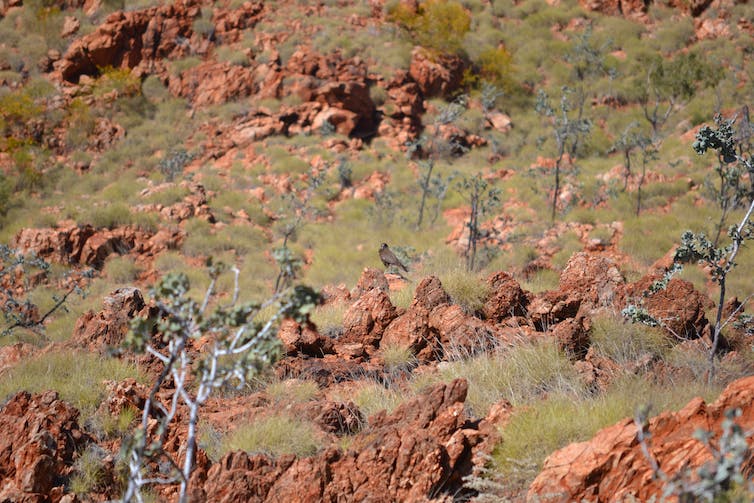 Our field observations, geochemical analyses and thermodynamic models demonstrate that rocks collected from the dome margin represent high silica magma that originally melted at a depth of around 42km before crystallising as granites at 20km.

Uranium-lead dating of zircon in the laboratory revealed that these rocks crystallised from 3.6-billion to 3.5 billion years ago.

The intensely sheared rocks at the boundary of the rising dome and sinking volcanic rocks contain a metamorphic mineral, titanite, that formed during the gravitational overturn.

We dated several of these mineral grains and they average 3.42 billion years old.

By dating both pre- and post-gravitational overturn rock associations, we were able to constrain its duration to a 40 million year period.

Combining our research with the published work of other geologists, it appears that the Pilbara experienced at least three gravitational overturns separated by 100-million-year intervals. 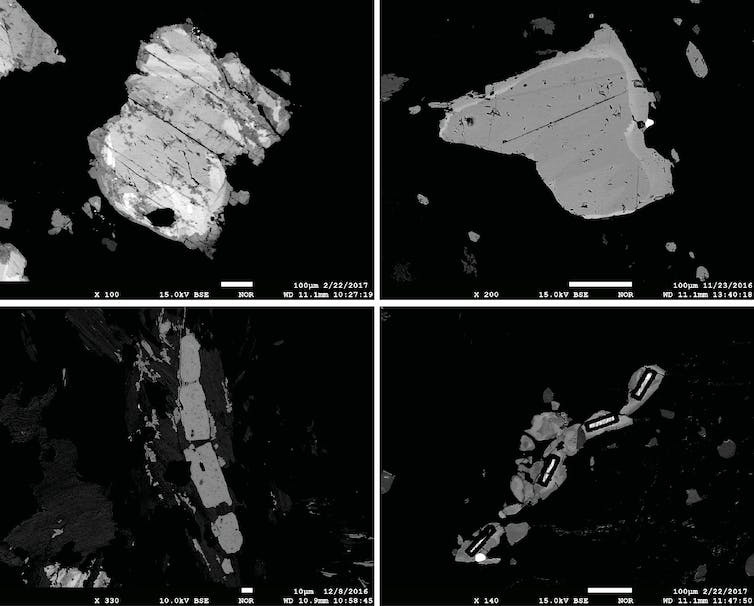 Back scatter electron image of titanite taken at Central Analytical Research Facility, QUT. The upper two images are primary magmatic images that have undergone deformation and alteration during the gravitational overturn. The lower two images are metamorphic titanite that formed during the gravitational overturn. The rectangular shapes in the bottom right image are laser pit from the dating process. Lana Wenham, Author provided

After the final overturn 3.2 billion years ago, the Pilbara crustal block was finally sufficiently robust and buoyant to survive plate tectonics lasting even until today.

We speculate that the cyclicity of overturn events in the Pilbara is the ancient equivalent of the 500- to 600-million-year Wilson cycle, one full round of crust from formation until destruction in the plate tectonic style in existence since 3.2 billion years ago.

The Pilbara keeps inspiring scientists worldwide to finding answers to one of humankind’s great questions: how did nature provide the platform for the eventual evolution of life?

We plan to test the idea of characteristic ancient overturn cycles elsewhere in the Pilbara and on other continents where ancient crust is preserved.