Our planet has had a few close encounters with asteroids of late.

Thankfully, both asteroids were relatively small (estimated between 15m and 40m). Neither posed a risk to Earth (this time), but Earth has not been so lucky in the past.

Research in Australia and other countries indicates that, in the distant geological past, asteroids as large as Eros (about 34.4km long and 11.2km wide) have impacted Earth. These have triggered major changes in the structure and evolution of the crust and mantle, as I’ve written about before. 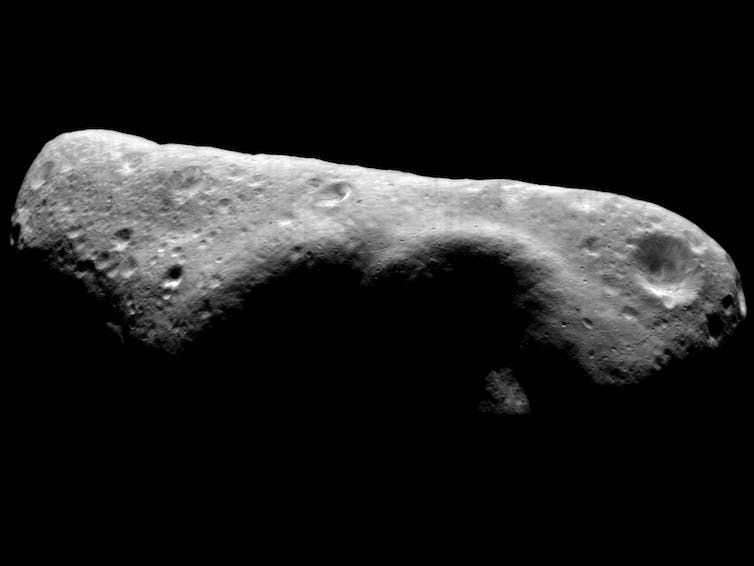 The impact of asteroids on the Australian continent and marine shelves is examined more closely in my new book, Asteroid impacts, crustal evolution and mineral systems, with special reference to Australia, co-authored by Franco Pirajno.

In the firing line

The terrestrial planets of the inner solar system – Mars, Earth, Venus and Mercury – are all affected by asteroids deflected from the asteroid belt, located between Mars and Jupiter, and by comets falling off the Kuiper belt beyond Neptune. 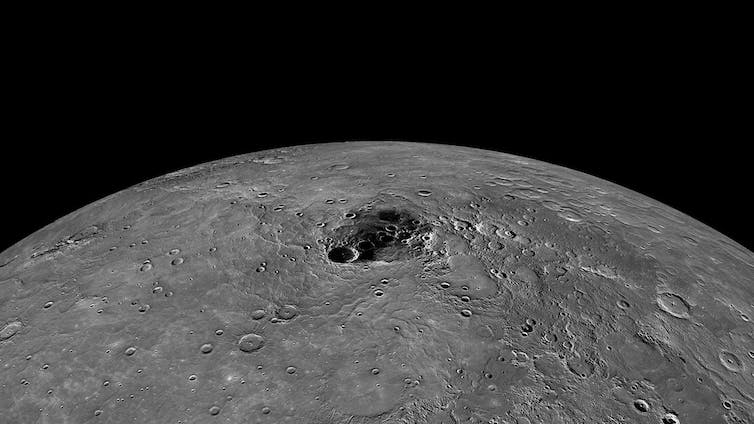 Many of these impact craters are clearly seen on Mars and Mercury as well as on our Moon. Venus too has its craters, but its thick atmosphere obscures these.

When Earth is viewed from space, it displays little or no cratering despite also being located in the trajectory of these asteroids and comets. 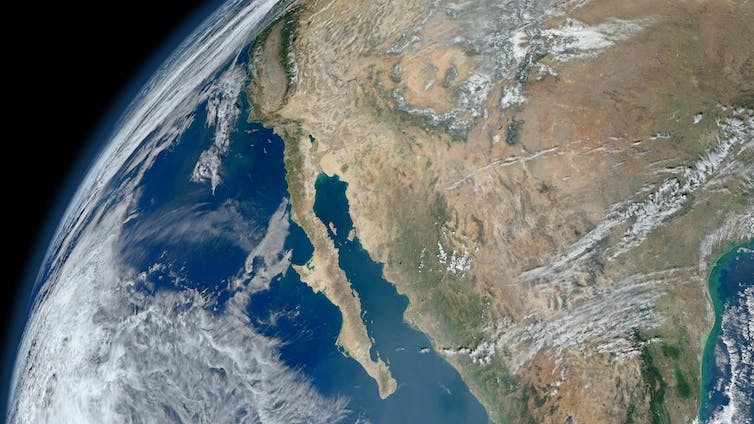 But this impression is apparent rather than real. Many of the impact scars are covered or masked due to the dynamic nature of Earth and the oceans that extend over some two-thirds of the planet’s surface. The masking processes include the accretion and subduction of tectonic plates as well as intensive erosion processes.

It was not until about 1981 that the scientific community began to recognise the significance of extraterrestrial impacts for the mass extinction of species about 66 million years ago, which wiped out the dinosaurs and many other groups.

The American scientists Louis and Walter Alvarez and their colleagues had unearthed a telltale iridium-rich sedimentary layer around the 66 million-year-old Cretaceous-Tertiary boundary at Gubbio, Italy. The element iridium, typically enriched in asteroids, is a signature within sediments for material from a meteorite impact.

The discovery re-established the idea that catastrophes shaped much of Earth’s history, a theory originally promoted by the French zoologist Georges Cuvier.

Impacts on the Earth

Beyond forming craters, the impact of large asteroids on Earth resulted in the formation of structural domes due to elastic rebound of the crust. Examples include the Vredefort dome in South Africa and the buried Woodleigh dome under and east of Shark Bay in Western Australia.

The impacts also caused major seismic activity and faulting, large tsunami events, ejection of masses of particles and dust, and – as mentioned earlier – in some instances the mass extinction of species due to rapid environmental changes.

The asteroid impact record on Earth is thus to a large extent concealed and the subject of an extensive search using structural, geophysical, geochemical and other methods.

Since many impact records are covered by the oceans or were eroded, old stable parts of the Earth crust, named “cratons”, are the best places to look. This is where the scars of ancient asteroid impacts are preserved and can be found, including craters and their deep-seated roots and rebound dome structures.

There are an additional 43 examples of exposed and buried circular ring and dome features, many of which are of possible or probable impact origin. 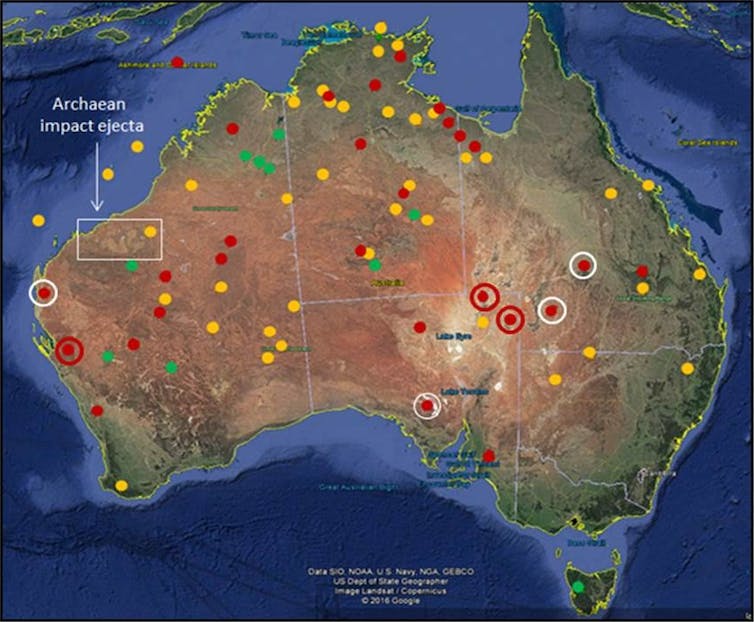 A Google Earth image of the central ring of the Gosses Bluff impact structure, central Australia, Northern Territory. It is 14km in diameter and was formed around 142 million years ago.

A Google Earth image of the Shoemaker impact structure, Nabberu Basin, in Western Australia. It is 30km in diameter and was likely formed around 1,630 million years ago.

A Google Earth image of the centre of the Acraman impact structure in southern South Australia. It is 90km in diameter and was formed around 590 million years ago.

A Google Earth image of the centre of the Lawn Hill impact structure in northwestern Queensland. It is is 18km in diameter and was formed more than 515 million years ago. 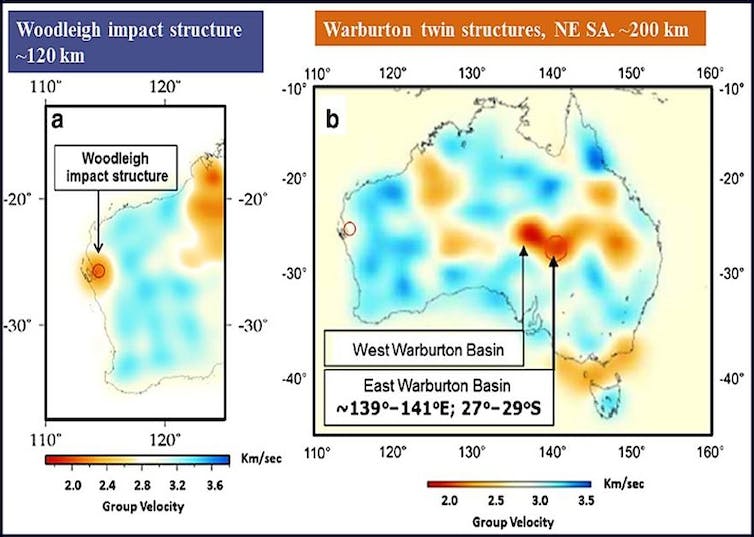 Structures and craters caused by asteroid impacts are not the only thing we find. In the Australian landscape there are also the rock fragments and melt drops derived from clouds ejected from the impact craters.

The melt drops, condensed from impact-ejected vapour, are termed “microkrystites”. These are recognised by their radiating quench (cooling) textures and abundance of platinum group element anomalies. 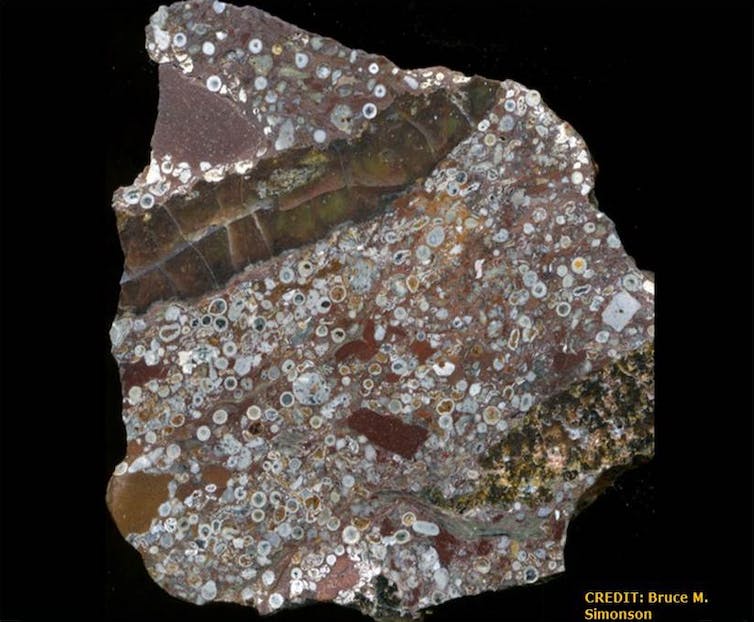 In at least one instance the evidence suggests that an impact by a cluster of large asteroids resulted in an abrupt transformation of crustal structure on the Pilbara, northwestern Australia, as well as the Barberton greenstone belt in South Africa, from a granite/greenstone system to semi-continental crustal environment.

Between 3.26 and 3.24 billion years ago these impacts caused a sharp tectonic uplift and magmatic activity, leading to to an onset of semi-continental crustal conditions.

Thus, far from being free from impacts, the Australian landscape has been shaped many times over millions and billions of years by asteroids falling to Earth.

As studies of Australian impact structure and impact ejecta progress, the critical role of asteroid impacts in the early evolution of the Earth and in the development of the Australian continent are becoming clearer.