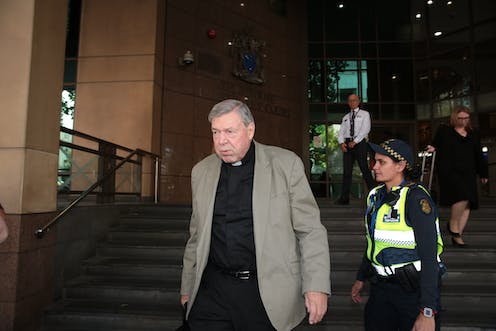 Many Australians are left perplexed when media coverage of high-profile criminal cases is suddenly suspended or abbreviated “for legal reasons”. The current committal hearing of Catholic Cardinal George Pell on historical sexual offences engages the principle of “open justice” and some of its most important exceptions.

Coverage of such matters is restricted at various stages of criminal trials. This is because of the relative priority the courts and lawmakers have assigned to the principles of open justice and the administration of justice, and the competing rights of free expression, privacy and a fair trial.

What is ‘open justice’?

The principle of open justice dates back to at least the 12th century; it involves people’s access to observe the goings-on in a courtroom. It was later extended to the media as “the eyes and ears of the public” in court.

Australia’s High Court has ruled that open justice is of constitutional significance, and nothing should be done to discourage the media from publishing fair and accurate reports of what occurs in the courtroom. But, it added, the principle is not absolute.

An open court involving fair and accurate media coverage is thus the default position for Australian courts. The common law recognises only a limited number of well-defined exceptions. Lawmakers have developed hundreds more.

One important common law limitation is in the area of sub judice contempt. This puts a halt to prejudicial coverage of a criminal matter from the moment an accused is arrested or charged right through until the appeal period has expired.

Important restrictions here are upon any suggestion an accused might be guilty (or innocent), coverage of contested evidence that may or may not be put to a jury, coverage of earlier proceedings (such as preliminary hearings and royal commissions), interviews with key witnesses, details of any confessions, the criminal history or character evidence about the accused, and visual identification of the accused if that might be at issue in a trial.

Legislation in all Australian jurisdictions has placed a litany of further restrictions on attendance at – and reporting on – a host of situations. These include family law cases, juvenile cases, mental health proceedings and – most relevant here – sexual matters.

The statutory gags forcing closure of courts, banning of coverage, and de-identifying of parties vary in important ways. This is because lawmakers have placed a differing emphasis on the competing rights and interests.

For example, if Pell was facing his committal hearing in South Australia or Queensland, he could not even be identified until after he is committed to trial – if that eventuates.

Lawmakers in those states have decided the reputational damage attached to an allegation of a serious sexual offence is so damaging that an accused person should not be identifiable until it is proven there is at least a prima facie case to answer at trial.

In Victoria, where Pell’s committal hearing is taking place, the accused can usually be identified. However, other restrictions apply either under legislation or in suppression orders issued by a presiding judge or magistrate.

In no Australian jurisdiction can the victim (known as the “complainant”) be identified – directly or indirectly – in sexual matters. But the laws vary on whether they might be identified after proceedings with their permission or the court’s permission.

This means complainants who might have been identified in earlier coverage or proceedings are suddenly rendered anonymous from the moment the matter is “pending” – after the arrest or charging of a suspect.

Special protections apply to complainants during committal hearings involving sexual offences. This includes closing the court while victims give evidence.

A complex array of policy issues inform these kinds of restrictions. These include the perceived vulnerability of victims, their privacy, and the important likelihood that victims might not come forward to bring charges of this nature if they sense they might be in the media spotlight.

Do we need a rethink in the digital age?

Victoria has had more than its share of journalists and others falling foul of court restrictions through defiance or ignorance of the law.

Former journalist and blogger (now senator) Derryn Hinch has twice been jailed as a result of contemptuous coverage – once in 1987 for broadcasting prejudicial talkback radio programs about a former priest facing child molestation charges, and again in 2013 after refusing to pay a A$100,000 fine for blogging the prior convictions of Jill Meagher’s accused killer in breach of a suppression order.

Two ABC journalists were convicted of identifying a rape victim in radio broadcasts in 2007. They and their employer were later ordered to pay her $234,190 in damages in a civil suit for the invasion of her privacy among other injuries.

In 2017, Yahoo!7 was fined $300,000 for contempt after it published social media material about a victim and the accused. The publication forced the jury in a murder trial to be discharged.

The cross-jurisdictional nature of digital publishing also renders journalists and social media users subject to the tangled web of restrictions on criminal justice reporting when covering a criminal matter from another state.

Court orders to take down earlier reportage on websites are typically futile, because online dissemination is so widespread. So, the bizarre situation exists where the prior character evidence and coverage of earlier proceedings still sits online for anyone to access with a simple search of an accused’s name.

This is problematic if a rogue juror decides to become a cyber Sherlock Holmes. It means we require better training of jurors.

Read more: Trial by social media: why we need to properly educate juries

Suppression orders are also a problem because these are typically circulated only to mainstream media in the trial’s immediate vicinity. This leaves others blissfully unaware of the orders. Some orders – known as “super injunctions” – are so secret that even publication of the fact they have been issued is prohibited.

Victoria’s Open Courts Act was meant to reduce the number of suppression orders and inject an element of consistency to the issuing of these. However, it has been problematic.

At least the media are better assisted in the modern era. Court information officers help explain the various restrictions and keep the media well briefed in high-profile trials – as they have done in Victoria during Pell’s committal hearing.