In this series, we have invited philosophers to write about what they consider to be the greatest moral challenge of our time, and how we should address it.

It would be easy to conclude that there’s a deficit of morality in the world today. That if only people were more motivated to behave ethically, if only they made morality more prominent in their thinking, then the world would be a better place.

But when it comes to pinning down a single greatest moral challenge of our time, I’d argue that there’s not a lack of morality in the world; there’s too much.

In fact, I believe the greatest moral challenge of our time is our flawed conception of morality itself. The way we tend to think and talk about morality stifles our ability to engage with views other than our own, it makes managing diversity and disagreement harder, and it tends to lock us into thinking patterns that produce more instances of suffering and unrest than they solve.

Murder is wrong. This is not just a matter of subjective personal preference, it’s an objective fact. That means if it’s true for me, then it’s true for you and for everyone else too. And if someone claims that murder is OK, then they’re mistaken.

This is the way many of us tend to think and talk about many moral issues, not just murder. We refer to moral facts. And we prove our moral stance is the correct one by appealing to these facts.

Some of us justify these facts by appealing to commandments delivered to us by some divine being. Others justify it by appealing to natural rights, or fundamental facts about human nature, such as that suffering is intrinsically bad so we should prevent it wherever possible.

Many of us see morality as like a science, where we can learn new moral facts about the world, such as when we discovered that slavery was wrong or that women ought to have the same rights as men, and we updated our moral attitudes accordingly.

I believe there are three major problems with this commonsense view of morality.

I’m not convinced there is any objective source of morality. I’ve spent a lot of time looking for one but am yet to find anything that isn’t deeply unconvincing.

Even if you believe there is a divine moral source that can dictate absolute right from wrong, it’s still down to us mere mortals to figure out the correct interpretation of its will. And history has shown that disagreements over rival interpretations of divine goodness can cause untold suffering, and still do today when dogmatists attempt to force their version of morality on the unwilling.

The second problem is that the idea of there being One True Morality is fundamentally at odds with the vast amount of moral diversity we see around the world. For example, there is widespread disagreement over whether the state should be able to execute criminals, whether terminally ill people have a right to die, and how sexuality can be expressed and practised in private and public.

If you believe that morality is a matter of objective truth, then this diversity means that most (if not all) people throughout the world are just plain wrong about their most deeply held moral convictions. If that’s the case, then it speaks poorly of our collective ability to understand what morality is at all.

The third problem is that this view of morality steers us towards thinking in black and white terms. It directs moral discourse towards proving other people wrong, or bending them to our moral views. It makes it much harder, if not impossible, for people to take other moral viewpoints seriously and engage in ethical negotiation or compromise.

This is one of the major reasons that social media, not to mention dinner table, discourse is in such a terrible state right now. Those on one side simply write off their opponents as being morally perverse, which shuts down any possibility of positive engagement or bipartisan cooperation.

So to respond to the greatest moral challenge of our time, we need to seriously rethink morality itself.

The best way to think about morality is as a cultural tool that we humans invented to help us live and work together in social situations. After all, we each have our interests that we want to pursue. They vary from individual to individual, but generally include things like being able to provide for ourselves and our loved ones, avoiding suffering and hardship, and pursuing pleasurable and fulfilling experiences. 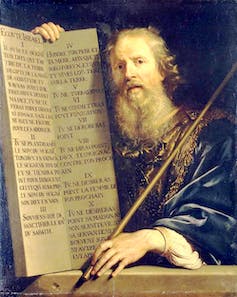 The Ten Commandments are an example of invented morality. Wikimedia Commons

The best way to satisfy these interests is to live socially, interacting and cooperating with others. But often our interests, or means of satisfying them, conflict with others. And that conflict can end up being bad for everyone.

So morality is the set of rules we live by that seek to reduce harm and help us live together effectively. We didn’t just discover it. It wasn’t handed to us from above. We had to figure it out for ourselves.

Of course, we haven’t always thought about morality in these terms, so we’ve justified it in any number of ways, often by appealing to religion or tradition. But we haven’t updated our thinking about morality to purge it of the baggage that came with religion and the rigid cultural conformity of the past.

Also, the problems that morality is trying to solve vary from one place to the next. People living in a small community in a resource-limited area like the Arctic tundra have different problems to solve than people living in a modern metropolis like Sydney or Melbourne, surrounded by abundance. If we apply the morality of the former to the latter environment, we can exacerbate conflict rather than resolve it.

All this means that morality should be less about “proving” your view and more about tolerance and negotiation. We need to learn to understand that different people - and different communities and cultures - have different conceptions of the good life. And we need to understand that the problems of social living, and their solutions, don’t apply equally well in every community.

It also means we must learn to become less morally dogmatic and more morally adaptable. Above all, we need to abandon the idea that morality is about objective facts that apply to all people at all times.

This doesn’t mean morality becomes an “anything goes” form of relativism. There are ways to judge the usefulness of a particular moral norm, namely: does it actually help solve the problems of social living for the people using it? Many don’t, so deserve to be challenged or reformed.

In an increasingly interconnected, diverse and multicultural world, it is more important than ever that we reform the way we think and talk about morality itself. If we don’t, no matter what other moral challenge you think we face, it will only become harder to solve.