There have been hyped reports of late about “brown fat”. Different from the fat we mostly have (white fat), brown fat is capable of burning more energy. So the theory goes: if we have more brown fat, we can lose weight. But selective reporting and misinformation has blurred the lines between fact and fiction.

What is brown fat?

Grab that roll of fat on your stomach – that is white fat. The job of white fat is mainly to store energy, and then release it when other organs need it. We have much less brown fat which is hidden deep in the torso and neck. The main role of brown fat is to heat our body when we’re cold. To produce heat, brown fat cells expend (burn) energy.

Decades of research, mainly in rats and mice, tell us when brown fat is “activated” from its resting state (for example, by cold exposure) it can burn a lot of energy relative to its small size. The potential for health lies in whether this energy-burning power can be harnessed to treat obesity.

Brown fat’s presence in adult humans has been known for decades. While previously believed to have no function, in 2009 a series of studies showed it does burn energy when activated by short-term (minutes/hours) cold exposure. Our brown fat can’t burn as much energy as the brown fat in mice, and some evidence suggests its normal energy burning level is so low as to be irrelevant.

When brown fat is not “activated”, its energy expenditure is very low. The level of cold exposure and the amount of the skin surface exposed control the amount of energy expenditure. Most importantly, “training” brown fat forces it to become better at burning energy. But training involves weeks of daily cold exposure for several hours – something we modern humans rarely, or ever, do.

This new awareness of brown fat has, unsurprisingly, led to exaggeration of its purpose, function and benefits in humans. Cold exposure as a health fad has boosted this recent popularity. Common recommendations to activate brown fat are cold showers and (worryingly), immersion for short periods in very cold (below -100°C) nitrogen gas.

Brown fat, like muscle, follows a “use-it-or-lose-it” principle and, as highlighted above, the more you use it the better it gets. Training brown fat requires cold exposure for several hours per day. So brief periods such as a few minutes in the shower or a dip in nitrogen gas interspersed in an otherwise warm lifestyle are unlikely to train brown fat in a meaningful way.

Should strong-willed devotees be willing to participate in hours of daily cold exposure, they will most likely increase their brown fat’s energy burning ability. But weight loss is unlikely to follow. Remember, the main function of brown fat is to keep you alive, not thin. During cold exposure, hunger is stimulated alongside brown fat activation to ensure there is adequate fuel for the fire.

Recent studies in mice show a role for regular exercise in the “browning” of fat (making white and brown fat become more brown). These studies suggest exercising muscles release hormones that make brown and white fat cells become more “brown-like”, meaning the fat cells can burn energy when activated by cold (noting that exercise itself does not activate brown fat). 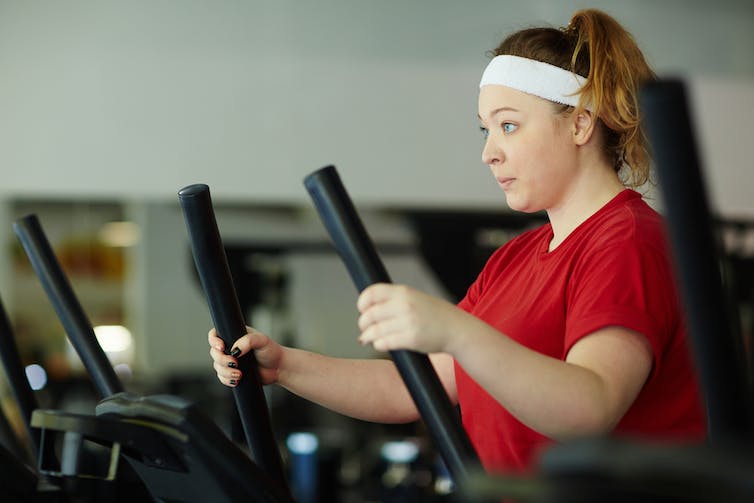 Studies in humans did not find exercising increases brown fat. from www.shutterstock.com

And contrary to recent reports, exercising in the cold will not allow you to get fit and increase brown fat function at the same time.

Read more: How we can change our body shape with exercise

Our research also shows two drugs that we and others thought would increase brown fat function, based on previous studies in mice and rats, actually decreased it.

Understanding the role and relevance of brown fat for our health is at an early stage, and we have yet to discover its full capability. Being cold most of the time, for a really long time, will increase brown fat function, but there is currently no evidence for more suitable options, particularly ones that don’t also stimulate hunger.