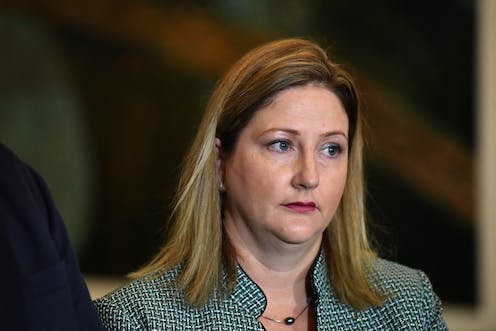 Malcolm Turnbull has told Rebekha Sharkie, the Nick Xenophon Team’s sole member in the House of Representatives, that her eligibility may have to be determined by the High Court.

Sharkie, born in Britain, was registered as renouncing her United Kingdom citizenship after she nominated for last year’s election, although she started the process a good deal earlier.

Turnbull rang her on Thursday before he left for the APEC meeting in Vietnam. Sharkie had been in the media saying she wanted to meet him about the citizenship crisis.

She said in a statement that he asked her about dates. She completed her forms on April 19 last year; the material was sent express international post. On June 2 the Home Office acknowledged her application had been received. She nominated for Mayo on or about June 7. The Home Office registered her renunciation on June 29.

Under section 44(i) of the constitution a person is ineligible to nominate for election to federal parliament if they are a dual citizen.

Sharkie, who said she had been open throughout about her citizenship status, produced documentation, and supported a full audit of MPs, said: “The Prime Minister in our conversation suggested I may have to refer myself to the High Court.”

“I believe that I took all steps that were required by the UK to renounce any entitlement to UK citizenship, that were within my power to take. I had no control as to the speed at which the UK Home Office processed my application but I note that well over a month would have passed before I actually nominated for the seat of Mayo”.

Sharkie is the latest name to be canvassed in the list of parliamentarians who might be ineligible to sit in parliament, following those of Tasmanian crossbench senator Jacqui Lambie and assorted Liberal and Labor MPs. Liberal backbencher John Alexander is waiting for Home Office advice as to whether he is a British citizen by descent. Labor’s Justine Keay and Susan Lamb are in similar circumstances to Sharkie.

Meanwhile Bill Shorten and Turnbull escalated their fight over the disclosure resolution the government plans to put to parliament and related issues – although Turnbull also signalled he expects to reach agreement with Shorten about the disclosure requirements.

Labor wants to toughen the terms of the disclosures MPs have to make and to put a December 1 deadline on them.

In a wide-ranging letter to Turnbull, Shorten sought a commitment the government would not use its numbers to make “partisan referrals” to the High Court; Labor also wanted a commitment that any ministers referred would stand aside from the ministry.

As well, he asked that Communications Minister Mitch Fifield, who knew of former Senate president Stephen Parry’s likely British citizenship before it was revealed and then confirmed, should be referred to the privileges committee.

Shorten rejected a Turnbull proposition that only non-controversial legislation be considered for the rest of this year. While the New England byelection is on, the government does not have a working majority in the House.

Turnbull has compromised on his original longer timetable, now saying December 7 is an appropriate deadline for the declarations. The House could then consider the declarations, take legal advice and “resume the following week to determine the matter of referrals”, he said in a letter to Shorten, composed on the VIP aircraft on the way to Vietnam.

Turnbull made it clear that the Government would refer Labor members to the court.

“You appear to be asking me to not refer to the High Court Labor members who were UK citizens at the time of nomination but claim that lodging a renunciation declaration prior to that nomination protects them from disqualification”, he wrote.

“I cannot give you that assurance. The government will vote to refer any individual to the High Court if there are substantial grounds for believing they are in breach of the constitution.”

He said the proposition that Fifield was in breach of privilege was “absurd”.

But despite earlier fiercely attacking Shorten for playing politics, Turnbull wrote that “nonetheless we are not far apart in terms of the nature of the disclosures sought. As you know in the course of our meeting when your anxiety about your dual citizen MPs became apparent, I offered to include a section of the disclosures for them to foreshadow the arguments they would put to the High Court if referred.”

Turnbull said the government would consider Shorten’s revised wording of the disclosure overnight “and hope to resolve this tomorrow”.