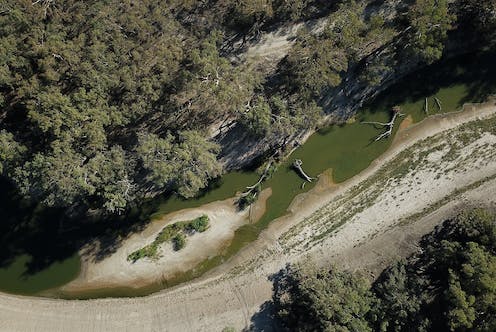 A long-awaited report released on Tuesday found the amount of water promised to river environments under the Murray-Darling Basin Plan “cannot be achieved” under current settings. In short, the plan is failing on a key target.

The water is essential to protecting plants, animals and ecosystems along Australia’s most important river system.

One part of the plan stipulates that by 2024, 450 billion litres of water – a small proportion of the overall target – should be recovered and returned to rivers, wetlands and groundwater systems. This should be achieved through water efficiency programs funded by the Commonwealth.

But just two years out from the deadline, only 2.6 billion litres, or about 0.5% of this water, has actually been delivered. The findings have reignited debate about the Murray-Darling Basin – a running sore for which treatments abound, but seemingly no cure exists.

Before the May election, Prime Minister Anthony Albanese pledged to deliver the Murray-Darling Basin Plan. But yesterday’s report, prepared by independent experts, casts serious doubt on whether that promise can be kept. The basin’s focus on a sustainable future is still a way off, and only political will can fix it.

Read more: Australia, it's time to talk about our water emergency

What’s this all about?

You could be forgiven for not having read Tuesday’s report, which bore the repellent title “Second review of the Water for the Environment Special Account”. It reflects the arcane and impenetrable jargon surrounding water management in the basin which hinders public understanding of this crucial policy area.

The plan involves “water recovery targets” to be met by “efficiency and constraints measures”. But what does that all mean?

Irrigators and other water users extract water from the rivers, streams and aquifers of the Murray-Darling Basin. Over the years, too much water has been extracted, which has left the basin in poor condition.

The A$13 billion Murray-Darling Basin Plan was meant to address this problem. Passed into law in 2012 under the Gillard Labor government, it promised to deliver 3,200 billion litres of water to the environment each year, by buying back water allocated to extractors and retaining it in the river system.

The goal comprised two targets for water to be delivered to the environment each year: 2,750 billion litres as soon as possible, and an additional 450 billion litres later, if it did not cause significant socio-economic impact. To do the latter, the federal government established a $1.8 billion Commonwealth fund to invest in water efficiency projects that would deliver water back to the environment.

Complicating matters, irrigators and others were opposed to water buybacks. In 2015, the Coalition government put a stop to the practice, despite its proven cost-effectiveness compared to alternatives such as subsidising dams and channels under efficiency programs.

Irrigators and others were opposed to water buybacks. Lukas Coch/AAP

Water savings were to come from measures such as improving water efficiency on farms, and funding irrigators to reduce evaporation from dams by building them deeper.

But engineering does not easily replace ecological complexity shaped over millennia. Making water move more quickly down a river produces casualties: the creeks and wetlands and groundwater systems that rely on it.

Major efficiency projects have been exposed as inadequte. They predominantly just move environmental water from one part of the basin to the other, at significant public cost.

So what’s the upshot of all this? According to Tuesday’s report, under current efficiency measures only 60 billion litres of water can be returned to the basin environment by 2024. What’s more, the original target of 2,750 billion litres has not yet been achieved.

Read more: We looked at 35 years of rainfall and learnt how droughts start in the Murray-Darling Basin

The Coalition claimed its policy would not harm the river system. Dean Lewins/AAP

Our rivers remain in trouble

After all this effort and debate, the health of the Murray-Darling Basin continues to degrade.

The State of the Environment report released this month found water extraction and drought left water levels at record lows in 2019. Rivers and catchments are mostly in poor condition, and native fish populations fell by more than 90% in the past 150 years.

Who could forget the disaster of late 2018 and early 2019, when millions of fish died at Menindee Lakes? That disaster was associated with low river flows, from the drought exacerbated by over-extraction.

First Nations peoples, river communities and others that rely on healthy rivers have also borne the costs of this policy failure.

Recent rainfall and flooding has bought breathing space, but drought will return, and climate change is projected to make the basin drier.

Other factors are denying rivers the water they need. They include water theft and poor policy – such as the NSW government’s commitment to let water be harvested from floodplains, against warnings by its own advisers.

A crucial aspect not covered in the report is the lack of credible information on how much water is actually recovered by water efficiency programs. An independent audit on this is urgently needed.

And there remain opportunities to implement more efficient and cost-effective ways of recovering water for the environment. This could include buying back water from willing irrigators, while recognising the potential local economic effects.

It’s a politically difficult move – sure to attract opposition from the Nationals, as well as the NSW and Victorian governments.

But the health of the Murray-Darling Basin is essential for all Australians. As this latest report shows, our politicians must finally find the will to secure the basin’s future.