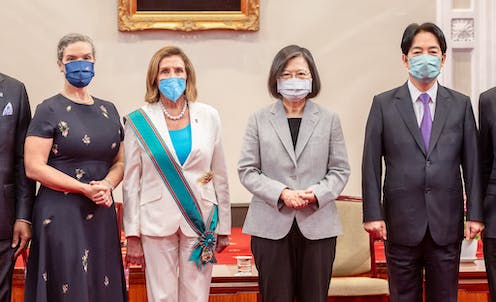 US Speaker of the House Nancy Pelosi’s provocative visit to Taiwan has been ill-timed from the perspective of China’s leader Xi Jinping.

In seeking to further consolidate his hold on power ahead of a National Party Congress in November, Xi needs to demonstrate that he is in command.

The Pelosi visit challenges Xi’s strongman narrative domestically at a time when he will be seeking the support of his colleagues in the Central Committee of the Chinese Communist Party for a third term as party secretary.

Read more: Trump took a sledgehammer to US-China relations. This won't be an easy fix, even if Biden wins

If nothing else, the Pelosi mission illustrates the limitations on Xi’s pledge to return Taiwan peacefully to mainland control as part of his declared policy of “national rejuvenation” into a modern superpower. This goes some way towards explaining Beijing’s reaction to a visit to Taiwan by a member of the US Congress, albeit one who ranks third in the hierarchy behind President Joe Biden and Vice President Kamala Harris.

There are two other factors at play. The first is suspicion in Beijing that the Biden administration is steering away from the US’s longstanding policy of “strategic ambiguity”, or avoiding confronting the “what if” issue if China threatened Taiwan militarily.

Biden has appeared on occasions to suggest that the US would come to Taiwan’s defence in the event of overt Chinese aggression. This exchange between a reporter and Biden in May will have concerned Beijing:

Biden: That’s the commitment we made.

The White House subsequently sought to walk back Biden’s statement, as it has done on other occasions when he has appeared to step away from a policy fudge on Taiwan.

US President Joe Biden has appeared to suggest that the US would come to Taiwan’s aid China if necessary. AAP/AP/zz/Dennis Van Tine/STAR MAX/IPx

The episode will have gnawed away at China’s confidence in the US commitment to a “one China policy” negotiated in various communiques and enshrined in the normalisation agreement of 1979. That agreement, under the Carter administration, extended full diplomatic recognition to China and severed normal ties with Taiwan.

Congress then enacted the Taiwan Relations Act, which allowed commercial and cultural relations and authorised the supply of weapons to bolster Taiwan’s defences. This has been a sore point with Beijing.

Read more: The risks of a new Cold War between the US and China are real: here's why

A second important element in China’s reaction almost certainly rests with Xi’s own exposure to the Taiwan issue as deputy party secretary in Fujian Province and political commissar in the People’s Liberation Army reserve during the rolling crises with the US in 1995-96. Fujian is the province nearest to Taiwan.

In 1995, China was infuriated when President Bill Clinton authorised a visit to the US by Lee Teng-hui, leader of Taiwan’s Nationalist Party. This reversed a 15-year ban on visits by Taiwanese leaders.

Lee’s election the following year in Taiwan’s first free presidential election further displeased Beijing. This contributed to tensions throughout 1995-96 during which China conducted military exercises off Taiwan and the US sent warships to deter Chinese aggression.

Tensions between the US and China over Taiwan have surfaced sporadically since, but this latest eruption is probably the most serious given the high political stakes involved for Xi. However, it is in neither China’s nor the US’s interests to allow a military confrontation, although the possibility of an accident leading to a wider conflagration cannot be excluded.

It is notable that in its military exercises in and around Taiwan, China has been careful to avoid crossing a median line in the strait itself. The Chinese military has conducted air and sea drills. These have included live fire exercises.

Pelosi has been unrepentant about the diplomatic fallout her visit has caused. In a Washington Post opinion piece released after she landed in Taiwan, she criticised Beijing for increasing tensions with Taiwan. She also took Beijing to task for its “brutal crackdown” on political dissent in Hong Kong, and its mistreatments of its Muslim Uighur minority.

White House spokesman John Kirby noted the administration’s misgivings about Pelosi’s visit. “What we don’t want to see is this spiral into any kind of a crisis or conflict,” Kirby said Tuesday. “There is no reason to amp this up.” This is particularly so at a moment when the US has been urging Beijing to use its influence with Moscow to end the war in Ukraine.

So far, threats of Chinese retaliation have involved restrictions on some Taiwanese exports to China, and a melodramatic summoning in the middle of the night of US Ambassador to Beijing Nicholas Burns to the Foreign Ministry to receive a dressing down. The Pelosi visit may herald greater tensions in the US-China relationship, but a possible face-to-face meeting between Biden and Xi will be aimed at lowering temperatures.

From Australia’s perspective, there’s no benefit to be gained from tensions between its security guarantor and the destination for one-third of its exports. This was reflected in remarks by Prime Minister Anthony Albanese in an interview with CNN when asked whether Australia would defend Taiwan militarily:

Australia supports a one-China policy, but we also support the status quo when it comes to the issue of Taiwan. It is not in the interests of peace and security to talk up those issues of potential conflict.

Albanese’s remarks mirror those of the White House spokesman regarding Taiwan, a reflection that it is not in anyone’s interests for this dispute to escalate.