After the intensely dry conditions of 2019, January and February have brought much-needed rain. Dams in many cities and towns were replenished and some farmers may be able to grow a crop for the first time in several seasons. So does this mean the drought has broken?

The answer is not straightforward. There is no single definition of drought, and the impact of rain varies enormously depending on where it falls.

The assessment of drought conditions involves not just rainfall, but other factors such as water supplies and soil moisture.

The Bureau of Meteorology reports on “meteorological drought” – that is, drought considered purely from the perspective of rainfall deficits. Totals in the lowest 10% of historical observations are considered a serious to severe rainfall deficiency. The bureau does not have responsibility for declaring drought, which is complex and reflects both demand and supply of water, as well as social and economic factors.

In the three years to January 2020 some 33% of Australia and 96% of New South Wales had serious or severe rainfall deficiencies. In the most-affected regions, rainfall over the past three years was around half the long-term average.

Based on rainfall so far in February, the areas suffering serious to severe deficiencies has only slightly improved (to around 30% of Australia and 90% of NSW).

In other words, while some areas have seen excellent rainfall, others have not – so the overall relief from meteorological drought so far this year is modest. 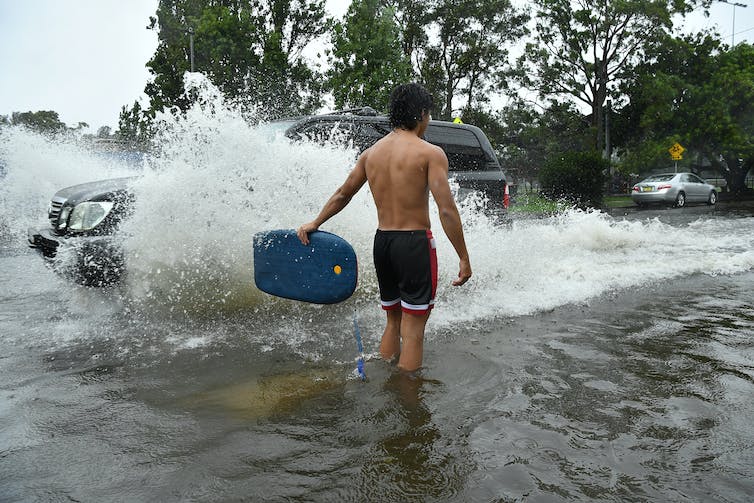 Last year was Australia’s driest on record, intensifying one of the most severe droughts of the past century.

In eastern Australia, the dry contributed to the severe 2019-20 fire season. It also challenged town water supplies, and contributed to mass fish die-offs, falls in agricultural production and drying wetlands.

Read more: The science of drought is complex but the message on climate change is clear

The dry conditions were intense and persistent. The Murray-Darling Basin experienced above-average rainfall in just five months from 2017 to 2019. The total three-year rainfall was a record low 917mm – that’s 548mm below average. 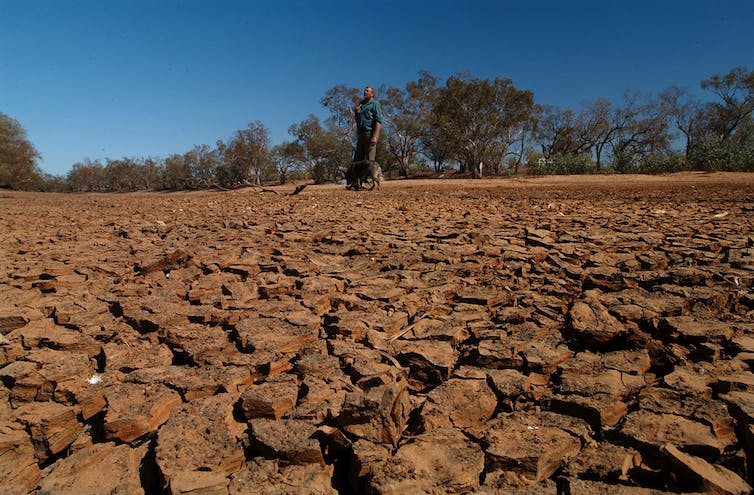 Dry conditions in Australia were intense and persistent. Dave Hunt/AAP

Then the rains came

The national rainfall for January was slightly above average (89mm), though NSW, South Australia and the Murray-Darling Basin again recorded below average rainfall overall.

Read more: The winter was dry, the spring will likely be dry – here's why

The first half of February has seen good rain across South Australia and inland Western Australia, and heavy rainfall along the east coast (seaward of the Great Dividing Range).

Rainfall was heavy around Sydney, the Illawarra and northeast NSW/southeast Queensland. Several local rainfall records were broken, while Sydney saw a remarkable 392mm fall over four days – more than the city received in the second half of 2019.

But the rain did not fall evenly across the eastern states. Many places in southern and western NSW have received only patchy falls. For example, Broken Hill has received just 8mm since the start of the year. These areas will need more rain to ease drought conditions. 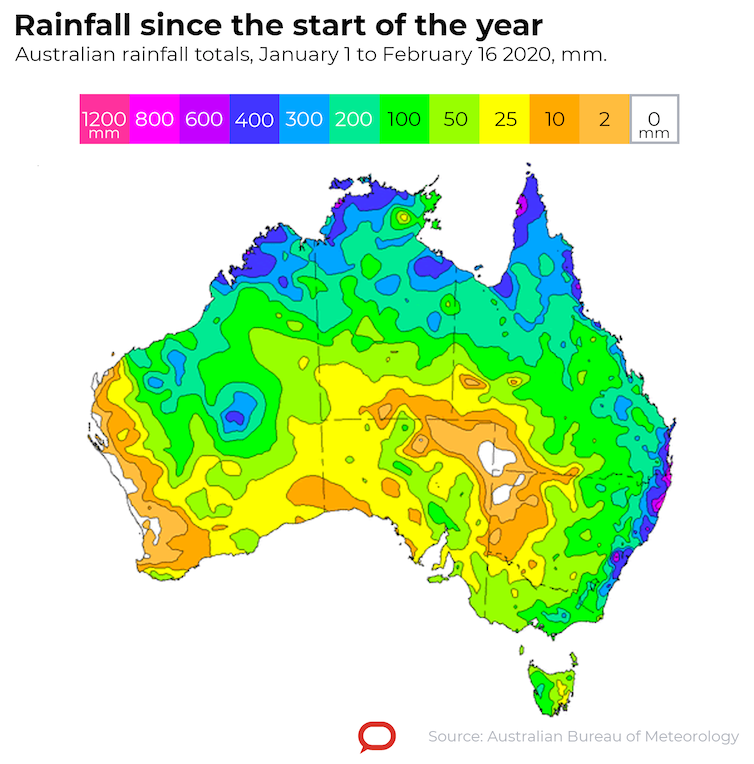 Bureau of Meterology, CC BY-ND More than rain Drought is not just about rainfall but also about the water available in dams, in the soil and in our groundwater systems. At the end of 2019, soil moisture reserves across large parts of the country were close to zero. In recent weeks, absolute soil moisture across Queensland, NSW, South Australia and Victoria has improved. While the east coast is now generally very wet, conditions are more varied inland reflecting the patchy nature of summer storms. 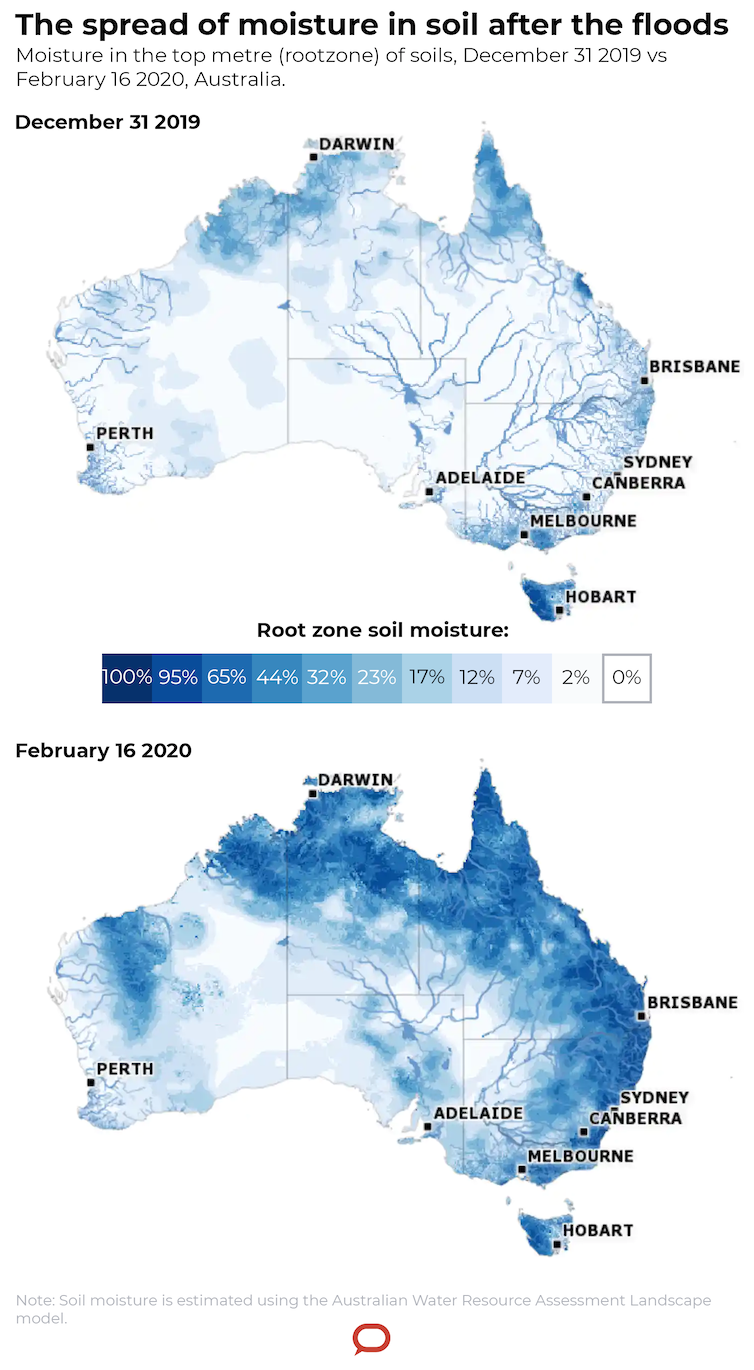 Bureau of Meterology/Author provided, CC BY-ND Inland rain led to local flash-flooding and triggered high river flows in several areas. Previously dry stretches of the Condamine River in Queensland have flooded, and the Namoi and Castlereagh Rivers in NSW have had their first flows in many months. A small volume of water will likely make it down the Darling, it will take more than a month. This is because losses to evaporation and seepage into the riverbed will be high. But not enough rain has fallen in the right places to significantly impact dam levels in northern NSW, which have been critically low over the past year. Collectively, storage volumes in major dams in the northern Murray Darling Basin have only increased by around 5%. The heaviest inland rain was downstream on the plains rather than on the western slopes of the Great Dividing Range, which feed the dams. There have, however, been notable increases in dam levels along the east coast where the best rain fell. Since the start of February, water storage volumes have increased from 42% to 79% in the Greater Sydney region and from 56% to 67% in south east Queensland. 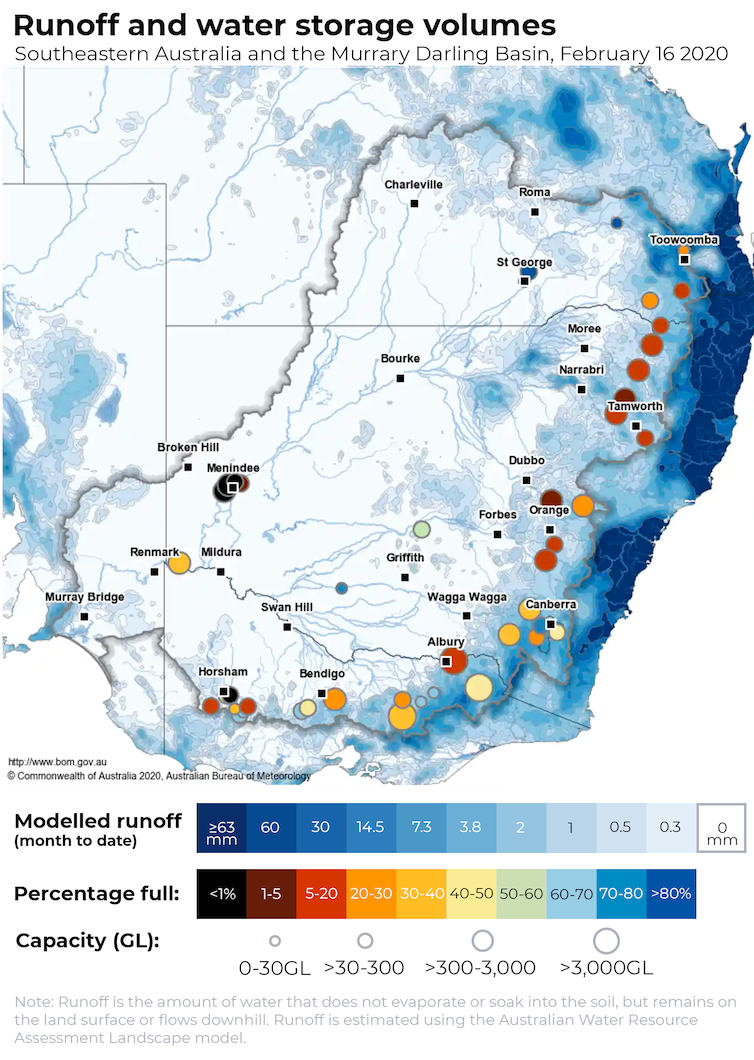 Bureau of Meteorology, CC BY-ND Rain in the season ahead Some areas have seen heavy rainfall which has brought drought relief. But others will need more rain in coming months to ease drought conditions. A natural climate driver, known as the Indian Ocean Dipole, fuelled very dry conditions in Australia in the second half of 2019. That event has now finished, and climate drivers are expected to remain “neutral” in the coming months. This means they are not expected to strongly influence our weather and climate. 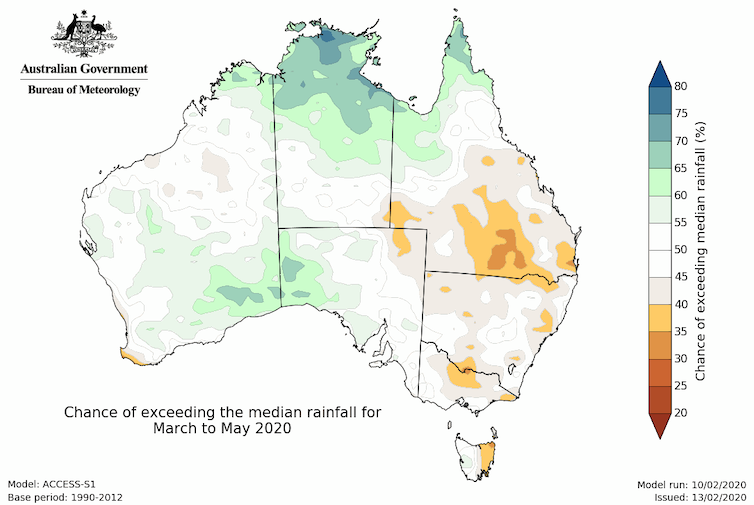