When people think about Australian Rules Football injuries, they tend to think about head injuries and the long-term effects of concussion. Or they might think of the potentially lengthy recoveries after hamstring, shoulder or ankle injuries.

But our recently published research found another leading cause of injury serious enough to take players to the emergency department – injuries to the hand or wrist.

These cost one Victorian public health network between about A$250 (for a single emergency department consultation) and about A$5,300 (for surgery and rehabilitation) each time. And many of these injuries can be prevented or better managed.

What causes these injuries?

How does Aussie Rules differ from other types of football?

The sport’s distinctive rules and physical demands exposes players to both unique and uncommon injuries compared to those sustained in other football codes, for instance in gridiron football played in the United States and Canada or Gaelic football played in Ireland.

Put simply, the 360-degree nature of the game (unlike rugby which is played mainly in straight lines up and down the pitch), can result in fingers, hands and wrists to be pulled, jarred, kicked and crushed.

Players’ hands and wrists can also be injured by other players, when falling on the grass pitch or when in contact with the hard leather ball.

Read more: Explainer: what is traumatic brain injury and how is it treated?

More and more people playing around the country

Research published in the 1990s found hand fractures were the second most frequent injury, behind concussion, for amateur Aussie Rules players.

Since then, the game has become much more popular. Nationally, it’s the third most popular organised sport for children (behind swimming and soccer).

And the number of women playing the amateur game has increased since the introduction of the women’s professional league, the AFLW.

Read more: Growth of women’s football has been a 100-year revolution – it didn't happen overnight

This rise in participation at an amateur level is likely to have impacts on the number of injuries presenting to emergency departments.

We weren’t aware of Australian data looking at people with sports and exercise-related hand and wrist injuries who presented to the emergency department. So we decided to establish baseline data so that we could track patterns over time. 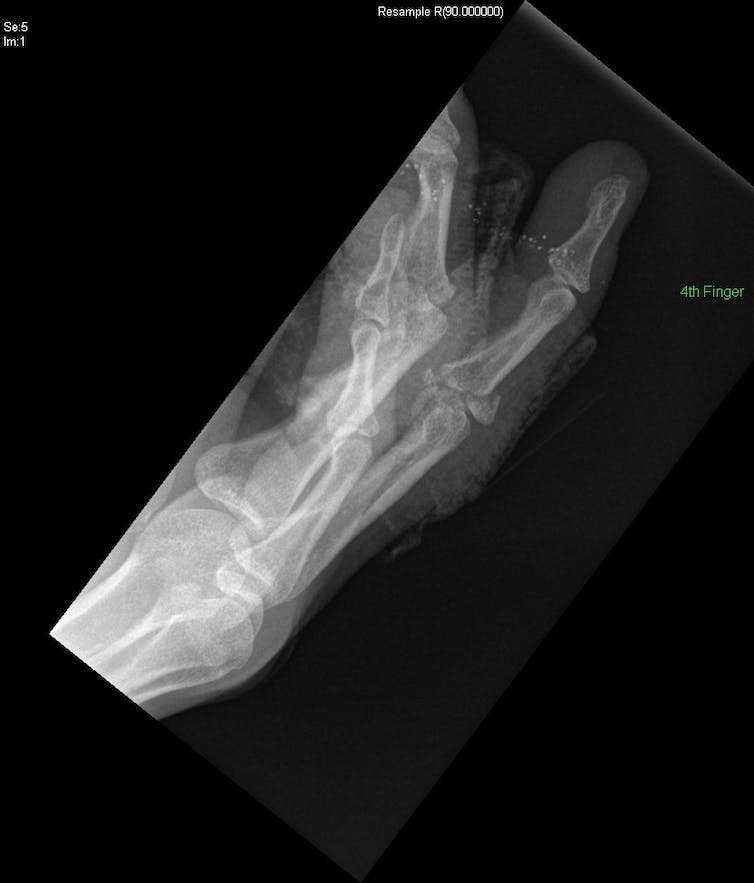 This x-ray shows a complex finger joint injury from a player who came to the emergency department after playing Aussie Rules. Author provided

Our study used diagnostic codes and billing records at one Victorian public health network. Over a year, we identified and tracked 692 people with a sport and exercise-related admission to the emergency department following a hand or wrist injury.

The most common injuries were finger dislocations, with or without fractures, to the proximal interphalangeal joint (the middle joint on the x-ray shown) of the little and ring fingers. Next came metacarpal fractures (in the bone below the knuckles).

The total cost of all sport and exercise-related injuries during the year for the health network was A$790,325, with Aussie Rules accounting for close to A$167,000 alone.

Read more: Get a grip: the twist in the wrist that can ruin tennis careers

As Australia’s national injury database does not capture specific hand and wrist injury data, we cannot compare injury patterns from sports and exercise across states and territories.

But if our study was repeated in New South Wales, for example, where other football codes are more popular, we’d expect to see a different injury profile.

Could we prevent or better manage these injuries?

Nevertheless, our finding that Aussie Rules accounts for one in five sport and exercise-related hand and wrist injuries highlights the need for further action.

Preventing these injuries would be challenging for a number of reasons. These include the fast pace of the game, the number of players on the pitch, and the unpredictable bounces that come with using an oval shaped ball.

Yet several strategies might help reduce the frequency and impact of these injuries, as well as their health-care costs.

These include training players from junior grassroots level the correct way to tackle, handball and mark.

For example, when tackling, players need to avoid catching their fingers in another player’s clothing as it could lead to dislocation; players can avoid handballing with the thumb in the palm; and they can hold their fingers to the sky and their body behind their hands when marking where possible.

How to mark in Aussie Rules.

Clubs could ensure ground conditions are safe, for instance by providing padding on goal posts and avoiding playing on hard, concrete cricket pitches.

And, on the ground, we could ensure there are enough club trainers or health professionals experienced in diagnosing and managing these types of hand injuries. This would reduce the risk of misdiagnosis and exposure to further injury.

Both of us have treated injuries made worse by a well-meaning trainer who has, for example, treated a fracture as a dislocation, leading to further displacement of the bone fragments.