Half a billion dollars sounds like a lot of money, but that really depends on what you’re spending it on. In Tuesday’s federal budget, the Coalition government announced its Commuter Car Park Fund, a A$500 million, ten-year package intended to make it easier for people in the suburbs and regions to drive to their local railway station.

While this is a drop in the ocean compared with the wider transport infrastructure budget, we’re going to use it here as a starting point to run some thought experiments to see if this is the best way to spend our taxes to help people get around.

How much car parking could we buy for $500 million?

The construction cost for a single parking spot can range from A$10,000 for a surface car park to A$68,000 per space in multi-level structures. So, if all the money is spent on surface car parks, the new fund could build 50,000 spaces at railway stations around Australia.

Of course, not all of these spots are going to be in surface parking lots – some will need to be in multi-level parking garages. So, if we built one multi-level space for every five at ground level, the A$500 million earmarked in the budget would buy us 30,000 parking spaces.

Read more: Budget transport spending is about par for the course, but the pattern is unusual

If these 30,000 park-and-ride spaces at train stations are built, this is unlikely to lead to an increase in transit patronage. It could even run counter to providing good public transport.

On the day of the 2016 Census, 1,225,668 people used public transport to get to work. Generously assuming that a single car has an average of 1.5 passengers, the Commuter Car Park Fund might enable only 45,000 extra people to access the public transport network. That’s a tiny 4% of the current number of people who travel to work by public transport.

But studies show that only a small proportion of park-and-riders had previously commuted by car all the way to their destination. Many are existing passengers who used to walk, cycle, bus or drive to a different station but are now opting to drive to the station with new parking places. Non-commuters working or shopping in nearby activity centres also often use park-and-ride spaces.

There are at least 705 train stations in metropolitan Australia, and it is not clear from the budget papers where these extra parking spaces are going to be placed. Sydney has 176 train stations, Melbourne has 218, Southeast Queensland has 152, Adelaide has 89, and Perth has 70. Even assuming only 300 stations will need extra parking, that provides an average of only 100 new spaces per station.

Read more: This is how regional rail can help ease our big cities' commuter crush

More bang for your buck

There are cheaper ways to move an extra 45,000 people a day to and from railway stations and around our cities.

Linking a major university campus with a Skytrain station, Vancouver’s 99 B-Line bus service moves 56,000 passengers a day at a cost of less than C$14 million ($A14.7 million) a year.

Similarly, in Toronto, the Finch West bus service carries 44,000 passengers a day to and from the subway. The Toronto urban transit network moves more than a million people a day with an annual operating subsidy of C$713 million. 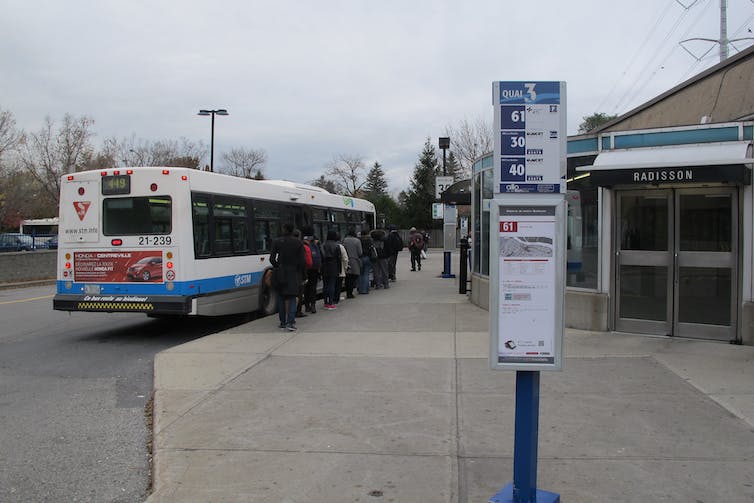 Passengers transferring from the Metro to a feeder bus in suburban Montreal. Iain Lawrie/University of Melbourne, Author provided

Each of these cities has comparable urban landscapes to suburban Australia, but is able to offer buses to nearby stations every five minutes.

We understand that these costs are not necessarily directly comparable. We provide them though as a point to think about, and so you might begin to ask how our cities could be better configured.

Better land use around train stations?

Alternatives like direct and frequent buses could liberate space around our suburban train stations. Around the world, stations are community hubs, and even simple stations can be wonderful, vibrant places for people. The best ones are a pleasure to move through and spend time in, unencumbered by the conflict and noise of space dominated by car traffic.

Building car parks wastes that place potential. Instead, it bakes in the mobility habits and planning prejudices that condemn our public places to being grey deserts, difficult to move through, and keeping out parks, shops, gardens, street life, walkability and human interaction. 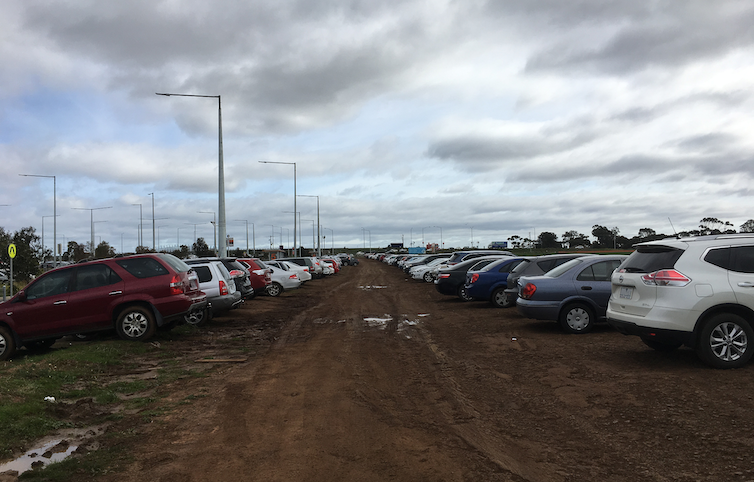 Underpinning the futility of the Commuter Car Park Fund is the fact that “demand” for free parking is fundamentally insatiable. Just like urban road space, building more of the wrong infrastructure simply induces more use and perpetuates congestion.

Parking policy scholars and practitioners have known for decades now that parking demand can be successfully managed, including via pricing existing parking supply and improving transport alternatives. Pricing and related policies serve as an effective disincentive to people who don’t need to be driving (and parking), freeing up road space for those who do.

Urban congestion is a problem of the quality and connectivity of our public transport network, not just a parking and road space issue. We have long known the policies and mechanisms to shift higher proportions of people to alternatives (and improve conditions for those who need to drive). We still need the funding and the planning capacity to achieve it.

Australia deserves better transport policy and a clearer, better-informed discussion about how its transport funds are being spent.

Read more: The elephant in the planning scheme: how cities still work around the dominance of parking space