Swamp foxtail (Cenchrus purpurascens) is a delightful grass that forms a neat tussock up to a metre tall with a distinctive fluffy spikelet that resembles a fox’s tail.

Foxtails are widely used in horticulture. The purple forms are particularly popular in ornamental gardens and some have even become invasive weeds.

The foxtail grasses are more commonly seen in these cultivated settings, which has led to much confusion about swamp foxtails’ origins in Australia. The species is simultaneously an exotic weed from Asia, the dominant grass in an endangered Australian ecosystem and a rare native species in isolated desert springs. 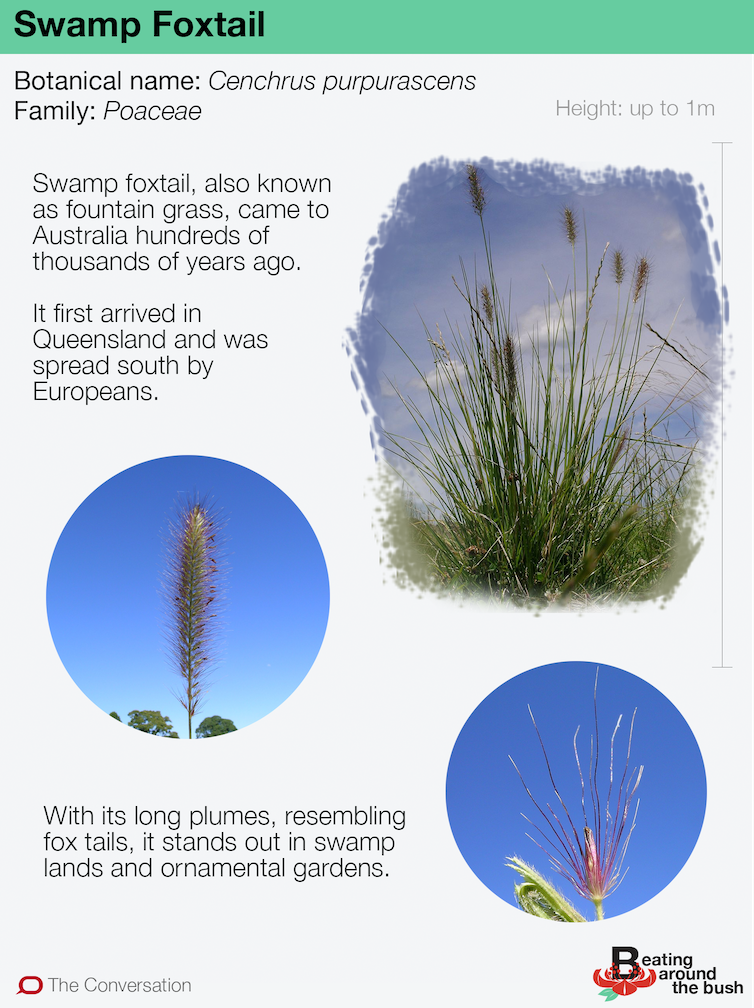 The Conversation Is it native? It was uncertain for a while whether swamp foxtail is actually native to Australia. Although Europeans collected it near Sydney, it was possible the seeds had come with livestock on the early ships. This theory was put to rest by genetic studies that found small populations have existed in inland Queensland for hundreds of thousands of years. The species spread southward and was first recorded in Victoria in the 1970s. European records Robert Brown, the botanist who accompanied Matthew Flinders as he circumnavigated the continent, made the the earliest European collections of the swamp foxtail near Sydney in 1802. Despite the early date of the collections, it is feasible that the swamp foxtail was brought to Sydney within 14 years of settlement as a byproduct among grain or hay. However, while the species occurs naturally in Asia, the Javanese ports were not on the typical travelling route from Europe. Read more: Spinifex grass would like us to stop putting out bushfires, please The intrepid adventurer Ludwig Leichardt later collected this species near the Gwydir River region. This collection provides more convincing evidence the swamp foxtail is native to Australia. It seems unlikely that, in the early years of colonisation, the swamp foxtail had been transported overland with the squatters who were spreading out from their successful properties in the Hunter Valley. The spread southward The history of herbarium records, from collections in the late 1800s and early 1900s, suggests swamp foxtail might have been native to Queensland and New South Wales. Collections south of these locations happened after 1940. The species was not recorded in Victoria until the 1970s. It seems almost certain the swamp foxtail spread southward during the 20th century, in some places as an undesirable weed. Unusual and isolated habitats Aboriginal fire management possibly maintained natural grassy openings among the northern NSW rainforests. The curious “grasses”, as they were named, are well documented on early survey plans of the Big Scrub country. Many a place name, Howards Grass Road and Lagoon Grass Road among them, bear testament to their existence. 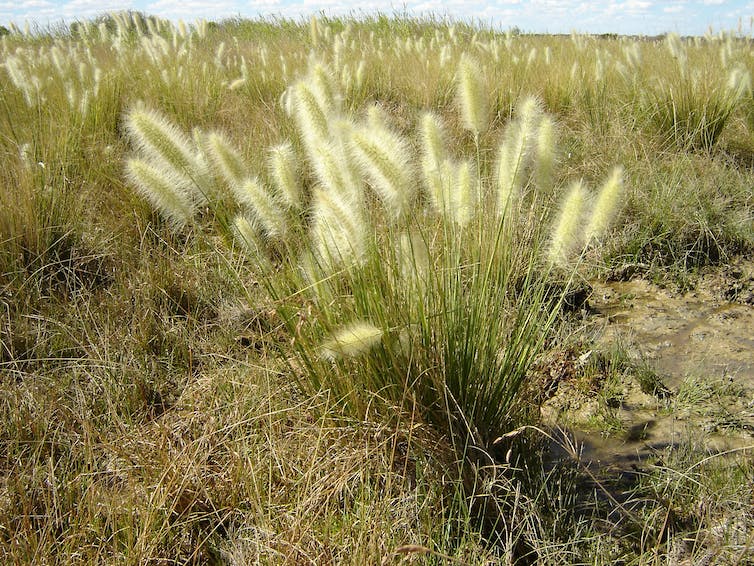 An extremely isolated population of the swamp foxtail at Elizabeth Springs in western Queensland. Rod Fensham The surveyors provided detailed recordings of the dominant grass on the valley floors: the “foxtail”. The swamp foxtail is now rather rare on the valley floors of the Richmond and the Tweed River valleys, replaced by crops on prime agricultural land. It managed to survive in a few locations west of Murwillumbah and on springs, but large expanses of the foxtail grasslands have succumbed to the plough. A particularly unusual habitat for the swamp foxtail is the artesian springs that feed permanent wetlands in the semi-deserts of inland Queensland. The swamp foxtail occurs there in very local populations separated by hundreds of kilometres. This raises the question: is the swamp foxtail a recent arrival on these tiny, strange and isolated ecosystems, or are these ancient populations? Genetic studies have provided conclusive evidence of an ancient origin. The oldest lineage is the population at Elizabeth Springs to the south of Boulia. Its molecular signature suggests this population has been isolated for hundreds of thousands of years. Where swamp foxtail does occur at springs, it is always accompanied by rare species that are seen only in those unusual wetlands. Read more: Grass trees aren't a grass (and they're not trees) Crossing continents and climates Swamp foxtail demonstrates the complexity of defining a species’ origin. This species probably evolved in Asia, because this is where most of its relatives are found. It found its way to Australia, possibly through a migratory bird that dropped a seed in a desert spring. It then had a second migration, either from the springs or from a repeat dispersal from Asia, and found a niche in the valley floors of subtropical landscapes. It was abundant in these moist and fertile habitats when Europeans colonised the continent in 1788. Since then, the swamp foxtail has spread to temperate climates where it has become invasive and, in some situations, a minor pest. Quite a journey.