Perhaps the most iconic dinosaur is Tyrannosaurus rex, a massive predator that lived in what is now North America. We have now discovered that carnivorous dinosaurs of a similar size existed in ancient Australia as well.

We learned about these carnivores by studying fossils that were discovered up to 90 years ago. Coal miners came across them while digging in the Walloon Coal Measures at Rosewood, near Ipswich and Oakey, north of Toowoomba, Queensland.

The fossils are not bones. They are fossilised footprints, the only form of fossils that record the movements of animals and preserve details of their behaviour and environments they preferred.

While searching through records of fossil footprints in Australia, we came across an archival photograph from the 1930s showing a dinosaur footprint inside a coal mine. While these mines have long since closed, the picture led us to investigate fossil footprints collected at that time and stored in museums, and other footprints like them. 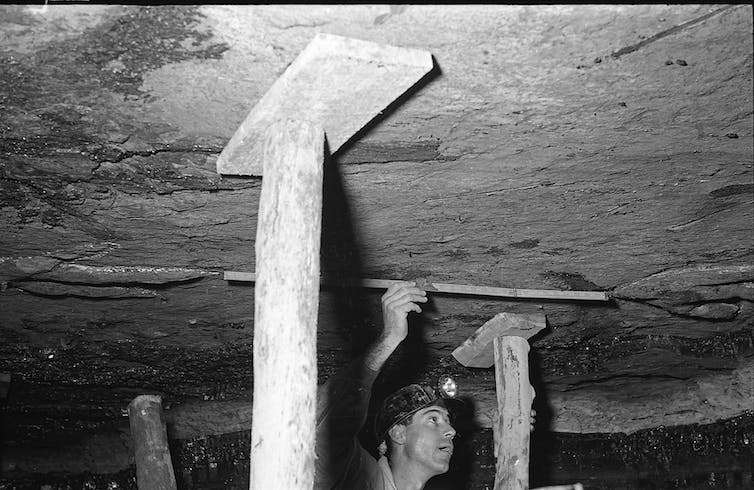 The specimens we found suggest the richly forested and swampy environment of southern Queensland in the Jurassic Period was home to several types of meat-eating dinosaurs. The smallest would have been the size of an emu, while the largest would have been just under 3 metres tall, almost as large and as imposing as a T. rex.

The footprint of this large dinosaur is almost 80cm long – roughly the distance from the centre of your body to the tip of your outstretched arm. The fossilised track is approximately 160 million years old, 90 million years older than the oldest known T. rex fossils.

This suggests the print belongs to a different predatory dinosaur. While similar to T. rex in size and dietary preference, these massive ancient Australian trackmakers may have been slimmer and more elongated in appearance than the North American dinosaur icon. 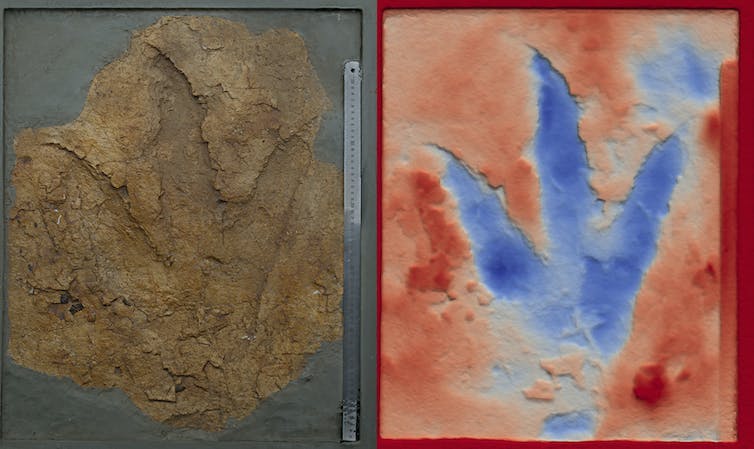 A photograph and a false-colour image showing the depth of one of the footprints. Anthony Romilio, Author provided

As well as individual footprints, we found evidence of trackways where multiple footprints made by the same animal are preserved. Based on what we know about how two-legged animals move, we can use the trackways to figure out how the dinosaurs travelled through their environment.

Several of the larger dinosaurs seem to have been moving at a walking pace, as the lengths of their steps are shorter than the estimated lengths of their legs. However, two trackways had the very large step sizes that are typical of animals on the run.

These speeds mean the ancient track-makers would have been formidable predators. Unfortunately, no trackway was preserved for the largest track-maker.

Not all kinds of ground are equally suited to preserving tracks for fossilisation. What appears to have happened in southern Queensland is the dinosaurs stepped onto mats of swamp plant material that was then overlaid with sand, which results in sandstone filled footprints in a bed of coal. The miners were able to easily remove the softer coal from beneath the sandstone, and to their surprise found these ancient footprints.

If not for the mining of coal and the keen eyes of the 20th century miners who spotted unusual features in the rock, we might never have known about these tracks. It is likely that more hidden treasures are still buried beneath our feet.

Filling in the gaps in ancient Australia

Our discovery fills a gap in the slowly growing record of Australian dinosaurs. While large dinosaur tracks have been documented in various Australian states, so far most belong to plant-eaters. They include tracks of long-necked sauropods similar to Brontosaurus, and ornithopods similar as Muttaburrasaurus, the skeleton of which can be seen on display at the Queensland Museum.

Evidence for meat-eating dinosaurs also exists, but so far the fossil record indicated much smaller animals, ranging from the size of chickens to a little bit smaller than Allosaurus.

Our discovery of the footprints of a huge carnivore adds an important top-level predator to the Australian dinosaur-scape.