Sometime on Monday, an Indian army patrol skirmished with Chinese troops in the Galwan River Valley, high in the Himalayas.

According to reports, no guns were involved, but the fight left at least 20 Indian soldiers dead from injuries caused by stones, makeshift clubs, and falls down the steep cliffs of the valley.

Although standoffs and even fistfights between Chinese and Indian troops have been relatively common in recent years, there have been no deaths on the disputed border for decades.

Such confrontations are usually defused by talks between commanders on the ground, leading to choreographed disengagements.

In this case, it appears those processes have failed, and at a moment when relations between China and India - both nuclear armed states - are already tense.

Origins of the dispute

When India gained its independence in 1947, it inherited unsettled frontiers with several neighbours.

That situation was exacerbated by Chinese leader Mao Zedong’s decision to seize control of Tibet - which up to that point had been a buffer state - three years later.

More than a decade of failed negotiations to agree a border followed, to the frustration of all. Then, in October 1962, in the midst of the Cuban Missile Crisis, Mao ordered a sudden attack on Indian forces.

China decisively won this short “pedagogic war” - designed to teach New Delhi a lesson. It gained ground from India, but then withdrew its forces, bringing them back close to their starting positions.

Since then, a “Line of Actual Control” (LAC) has, in effect, constituted the frontier.

Several more fruitless rounds of talks to settle an official border have taken place. And there have been several military standoffs, including one in 1975 that left four Indian soldiers dead.

Mounting tensions and the threat of war

The Galwan River Valley incident is by far the worst to occur on the LAC for some time. It also comes against a backdrop of several years of deteriorating relations between China and India, dating from the rise to power of Chinese President Xi Jinping.

Since 2013, New Delhi has reported a series of incursions by Chinese troops into what it regards at its territory.

The visits of both Chinese Premier Li Keqiang in May 2013, and Xi in September 2014, were overshadowed by such incidents.

And in mid-2017, there was a ten-week standoff between Chinese and Indian troops in Bhutan, in a disputed area called Doklam (or Donglang).

During that crisis, Beijing openly warned that if New Delhi did not pull back, it might go to war.

Disagreement over other issues

At the same time, China and India have quarrelled and competed over a number of other issues.

New Delhi has emerged as a vocal critic of Xi’s Belt and Road Initiative (BRI) and has tried to dissuade other states in South Asia and the Indian Ocean region from signing on to BRI projects. 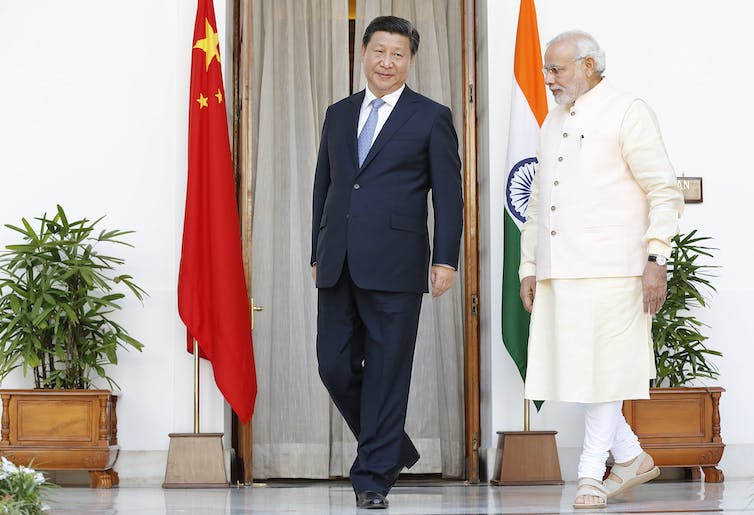 China and India disagree over more than their borders. Harish Tyagi EPA/AAP

India has complained about China’s trade practices, pointing to a growing trade deficit with its northern neighbour, as well as Beijing’s alleged attempts to influence the policies of smaller states such as Nepal.

Meanwhile, India has strengthened security ties with the United States, Japan and Australia among others - to Beijing’s obvious irritation.

The biggest test yet

There can be little doubt that what just happened in the Galwan River Valley constitutes the biggest test yet faced by Narendra Modi’s government.

India’s prime minister has long been portrayed as a “strongman”. This image has been burnished by retaliatory strikes against Pakistani targets for cross border terrorism in 2016 and 2019, as well as by his government’s apparent resilience during the Doklam crisis.

Indian public opinion is already angry with China over COVID-19 and in the wake of the deaths on the LAC, some media outlets, as well as opposition politicians, are calling for retaliation. 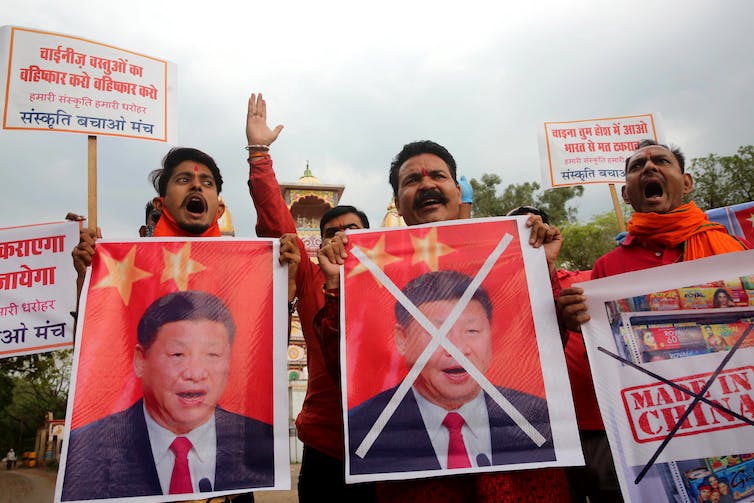 There have been protests in India after the Himalayan clash. Sanjeev Gupta EPA/AAP

Modi’s options are, however, constrained.

If he backs down, or even concedes the area around Galwan River Valley that some think Chinese soldiers are now occupying, he could face a political backlash from Indian voters.

If he orders some kind of military response, he risks a wider war. There have been persistent reports of troop build-ups right along the 3,500 kilometre frontier with China.

There is no guarantee a limited action would not escalate into something bigger, nor that India’s friends and partners, including the US, would support such a move.

All eyes now on China

Much depends on what Beijing hopes to gain.

If Xi is simply seeking to humiliate India for perceived transgressions - and warn it off deepening ties with its security partners - he may now order his troops to pull back, having made his point.

But if he wants to redraw the border and send a message to others - in Taiwan, Japan, Southeast Asia, or elsewhere - that China is determined to take what it claims - then deescalating the situation will be very difficult for New Delhi.