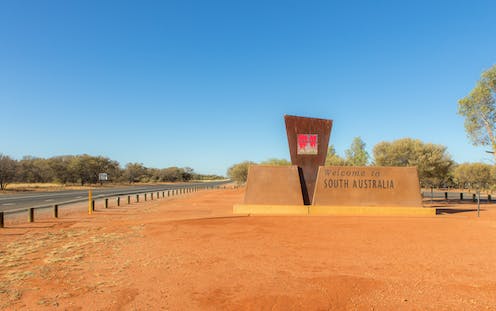 In one relatively short section of the Australian Constitution, section 92, you will find this phrase:

[…] trade, commerce, and intercourse among the states […] shall be absolutely free.

You would think there is not much in it, but it turns out this section is one of the most litigated sections in the constitution.

Australians have taken a special interest in section 92 since mid-March. Debating the constitutionality of state border closures in response to COVID-19 seemed to be trending with everyone staying home to help flatten the curve.

Legal challenges on border closures are already underway in the High Court, with arguments of its constitutionality.

Now, this interest in section 92 is being rekindled with the partial re-opening of borders between South Australia, Western Australia, the Northern Territory and Tasmania.

With Australia being one country, it was hard enough to accept it is constitutional for states to close their borders, but now South Australia seems to be offering travellers from these states and the territory special treatment.

West Australian Premier Mark McGowan has more recently suggested the partial opening of borders may be unconstitutional. Is it?

The issue is not the partial opening of borders. It is the rationale for these actions.

When South Australia announced this partial re-opening, it also indicated it plans to open its borders to all remaining states by July 20. The issue then is whether South Australia’s discrimination against New South Wales, Victoria and Queensland can be justified by efforts to prevent a second wave of COVID-19 deaths.

Since 1988, the High Court has interpreted section 92 as prohibiting discrimination of a protectionist kind – that is to say, the section prevents states from passing legislation to restrict trade. In the 1988 case of Cole v Whitfield, the High Court, in a unanimous decision, upheld Tasmanian regulations prohibiting a person from taking, buying or selling crayfish of less than a prescribed size, whether or not taken in Tasmanian waters.

In the course of his interstate trade, David Whitfield brought crayfish from South Australia to Tasmania for the purpose of sale to mainland and overseas markets. The crayfish were less than the prescribed size under the Tasmanian regulations, though above the prescribed size under comparable regulations in South Australia. The court explained in the decision that the legislation was not protectionist in nature. It was intended to help protect Tasmanian crayfish rather than restrict trade. The court elaborated in the following terms:

As was the case when all states decided to close their borders, the legal issue is whether the purpose of the closures is to restrict trade or to help protect the citizens of each state from becoming infected with COVID-19.

The orthodox view among Australian constitutional jurists is that section 92 does not allow for a balancing exercise between the competing interests of free trade and combating a pandemic. This might well be a question for the High Court to elaborate on when deciding the legal challenges brought against the Queensland government.

This interpretation is not impervious to pandemics or other crises. We see this in what are known as purposive powers, such as the defence power in section 51. In times of war, the core of this power will expand to equip the Commonwealth with the type of intervention necessary to keep Australia safe. There is no reason this rationale would not extend to pandemics.

Read more: National and state leaders may not always agree, but this hasn't hindered our coronavirus response

Enter the principle of subsidiarity. Elsewhere, I have argued the Commonwealth Constitution is superior to the Canadian and US constitutions, because it is more efficient. It allows for a wider area of concurrent powers. Our federal model is more agile, in the spirit of true subsidiarity, with its rules of assistance, non-interference and helping states acquire more competencies over time.

It is this principle of subsidiarity that holds the key to understanding the constitutionality of border closures and partial re-opening in response to the coronavirus pandemic. The states are best positioned to judge what intervention will work best in their case.

In the time of crises, no one size fits all.