Last weekend, NASA launched US astronauts to the International Space Station for the first time in a decade, in a rocket designed by Elon Musk’s SpaceX.

Under President Donald Trump, the US mission to reassert itself as the dominant power in space has rapidly gathered pace. In the process, the US has also begun to reshape international space law to suit its purposes – a move that has many countries concerned.

In April, Trump released an executive order restating US support for corporate exploitation of lunar and asteroid resources.

Read more: Giant leap for corporations? The Trump administration wants to mine resources in space, but is it legal?

The order also rejected a long-held view in international law that space is a global commons and that commercial use of space resources should occur under international oversight.

Then, last month, NASA released the “Artemis Accords”, named after its Artemis Program, which aims to return humans to the moon by 2024. The accords claim to

establish a common set of principles to govern the civil exploration and use of outer space.

What the Artemis Accords would do

Although NASA has only released a high-level summary of the accords, two issues for international space law are already clear.

First, the Artemis Accords go beyond simply rejecting the unpopular 1979 Moon Agreement, which declared lunar resources to be the “common heritage of mankind” and committed parties to establish an international regime to oversee space mining. Only 18 countries have signed the treaty.

In its place, the accords envisage a US-centric framework of bilateral agreements in which “partner nations” agree to follow US-drafted rules.

Second, the accords introduce the concept of “safety zones” around lunar operations.

Although territorial claims in space are prohibited under international law, these safety zones would seek to protect commercial and scientific sites from inadvertent collisions and other forms of “harmful interference”. What kinds of conduct could count as harmful interference remains to be determined.

The accords claim to comply with the 1967 Outer Space Treaty, a widely supported agreement that declared space the “province of all mankind” and permitted commercial resource exploitation as a “peaceful use” of space.

However, in practice, the accords have the potential to challenge the Outer Space Treaty’s ban on territorial claims in space. They could also intensify international conflict over space resources.

Will space continue to be treated as a global commons?

The Artemis Accords effectively kill off the prospect of international oversight of space mining.

The Moon Agreement committed signatories to establish an international regulatory framework when space mining was “about to become feasible”. This moment is clearly now, as Japan’s Hyabusa2 mission to the Ryugu asteroid and China’s Chang’e 4 lunar mission have demonstrated. Both missions are collecting mineral samples.

Although the Moon Agreement itself has attracted little support, the UN Committee on the Peaceful Uses of Outer Space has revisited the framework of space resources law in recent years and commissioned a working group to draft a new regime to govern space mining.

These draft principles were due to be considered at a UN meeting this year, but it was cancelled due to the COVID-19 pandemic.

Now, by releasing the Artemis Accords, the US has potentially scuttled these international negotiations for good.

The real difference between the Artemis Accords and an international framework negotiated within the UN turns on whether space will be treated as a global commons when space mining begins.

Under current international law, the benefits from commercial mining in global commons areas, including the international seabed, must in principle be shared equitably by “all mankind”.

The idea that the profits of space resource extraction should be shared via an international body garnered much support among developing nations and their supporters in the 1960s and ‘70s.

But entrepreneurs in the US space sector have long contested the global commons principle. And the US rejection of a global commons framework for space is ultimately a rejection of profit sharing. Mining and tech companies would retain all the profits.

And this, in turn, would further entrench existing wealth inequalities in the space resource industry. 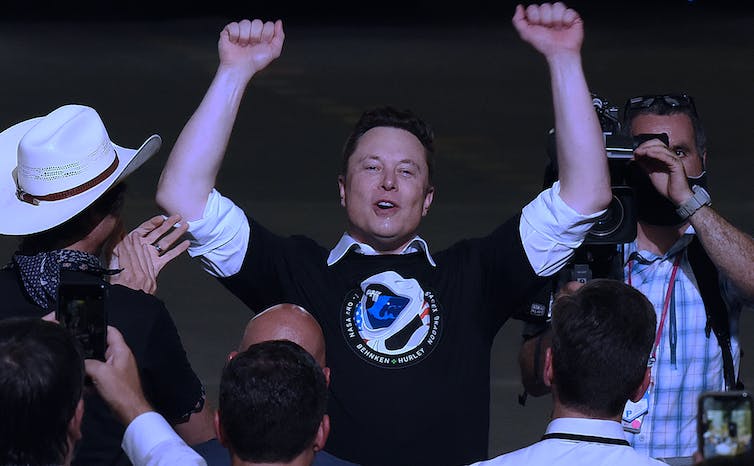 The safety zones under the Artemis Accords would require all commercial and government ventures to share information on the location and nature of their space operations and notify and coordinate any approaches to other sites.

The practical sense of safety zones is clear. However, such zones seriously test a fundamental principle of the Outer Space Treaty – the ban on territorial claims in space.

This revives an old legal debate over whether the distinction between private property and sovereign territory can actually be maintained in space.

Property rights provide commercial certainty, which space mining entrepreneurs have been demanding. But property rights are only effective if the threat of legal enforcement is real.

Whether safety zones can be enforced without amounting to a breach of the ban on territorial claims remains to be seen.

These criticisms have been fuelled by US space entrepreneurs, including Amazon founder Jeff Bezos, actively promoting “space colonisation”.

States already friendly to commercial space mining, including Luxembourg, the United Arab Emirates and India, will likely sign on to the Artemis Accords.

Early reports suggest Russia will not participate, though, and given the current state of US-China relations, Chinese participation is even less likely.

But the real impact of the accords will be determined by the countries in between. The response of the European Space Agency, which has partnered with Roscosmos in its own lunar prospecting mission, remains to be seen.

Australia, for its part, faces an awkward decision. As a party to the 1979 Moon Agreement, it will have to withdraw if it intends to sign an accord with the US.

Significant diplomatic manoeuvring can be expected over the coming months as the US seeks support for its attempt to redirect international space resources law.