At the weekend, Elon Musk’s commercial giant SpaceX launched two NASA astronauts in a spacecraft named Crew Dragon which, from the inside, looked like a souped-up Tesla.

The Falcon 9 rocket launched the spacecraft, returned to Earth and landed on a ship to later be re-used. And the Crew Dragon eventually docked autonomously with the International Space Station (ISS).

The flight marks the first time in history:

SpaceX has well and truly revolutionised space travel. But what does this mean for the many Australian companies making up a new space sector Down Under? 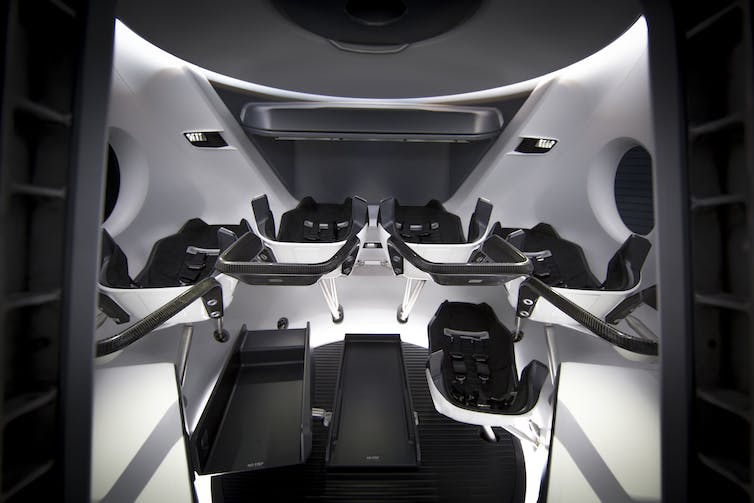 In 2018, the Australian Space Agency (ASA) was established with a mandate to the support Australian space industry, rather than develop a national civil space program.

The global commercial space sector is now watching Australia with excitement, and possibly some envy. Many countries over-regulate their space industries, or fail to give them legislative support. But Australia is a new entrant to the space sector that benefits from full government support through an industry-dedicated space agency. 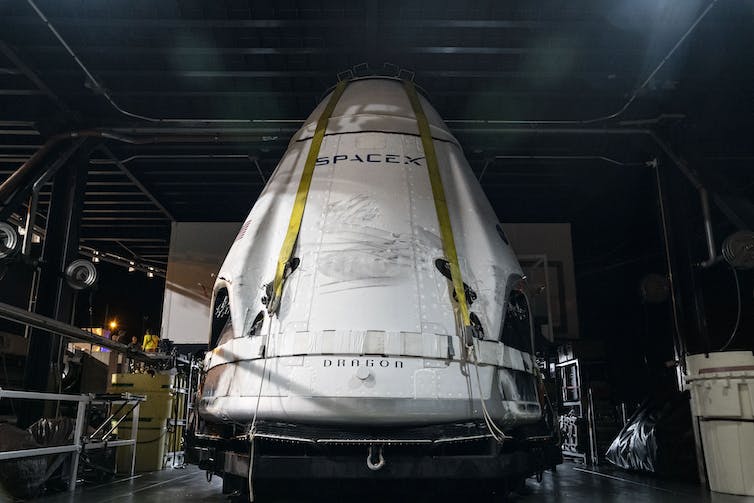 The SpaceX Crew Dragon spacecraft lifted off atop a SpaceX Falcon 9 rocket from Launch Complex 39A at NASA’s Kennedy Space Center. NASA Kennedy/Flickr, CC BY

The commercialisation of spacefaring

The 20th century space race began with government programs spurred by a technological and ideological competition between the US and the Soviet Union. However, today’s space race is highly commercial.

Many national space programs and militaries outsource to commercial entities for space services. Just this month, the Australian Department of Defence signed a contract with Queensland company Gilmour Space technologies to develop rockets for small military cargo and satellites.

Rather than large, expensive technologies developed for single purposes by government agencies, we’re now in an era of “NewSpace”. This is a term associated with small and medium sized companies developing smaller, lighter, and therefore cheaper technologies that can be repurposed and turned into “off the shelf” components.

Australian companies excel at this, as demonstrated by Gilmour, Neumann Space – which has a unique thrust technology for small satellites – and Myriota, a world leader in groundbreaking Internet of Things (IoT) technologies.

Giants such as SpaceX and Blue Origin are developing NewSpace technologies alongside their larger launch projects, and smaller companies benefit from their success when it comes negotiating public-private partnerships.

Even the opening of our own spaceport in East Arnhem land, expected by early 2021, is thanks to industry innovation.

NewSpace company Equatorial Launch Australia is the first commercial company ever to receive a launch contract from NASA. As a result, the company is developing the spaceport, where it will specialise in new launch technologies for small and light satellites.

With our own spaceport, Australia will join the ranks of just 13 other nations that have launch capacity from their territory.

And aside from NASA, many Australian companies and research institutes will be keen customers. Inovor, which builds tiny nanosatellites may be among the first.

Or perhaps Gilmour, as it tests a revolutionary hybrid propulsion rocket in partnership with the Australian National University. This could be the first commercial rocket of its kind to launch in the world.

Even in a pandemic, the space economy booms

According to a report released in May by accounting organisation KPMG, by 2030 every business will be a “space business”. The report suggests humans will live, work and holiday in space, and will be mining the moon for water and minerals.

And while human space flight from Australian shores may not be on the horizon, SpaceX’s launch is a beacon of hope for local commercial entities – especially because they push new technologies faster than government programs tethered to budgets and low-risk approaches.

Moreover, the ASA is considering entering into an Artemis Accord with the US. The launch technology demonstrated by SpaceX this weekend will be part of the Artemis program, which aims to return humans to the moon by 2024.

So although the national and global economy reels from the impacts of COVID-19 shutdowns, the global space economy continues to boom. And with Australia’s space industry taking off, the sky is definitely not the limit. 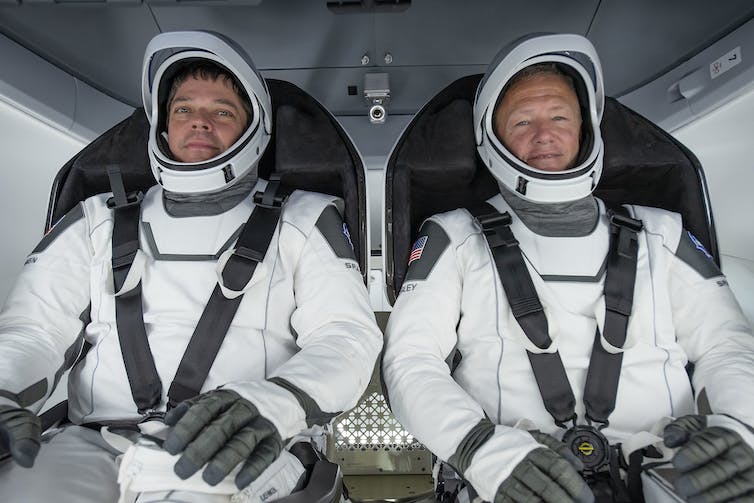 NASA astronauts Bob Behnken and Doug Hurley piloted the Crew Dragon. It’s the first spacecraft to carry humans into space from US shores since 2011. NASA Kennedy/Flickr, CC BY