In 1995, after the fall of the Wall, Berlin had started to be rebuilt, but was still in a state of disrepair.

There, Christo and Jeanne-Claude, two of the world’s most important land artists, wrapped the entire Reichstag, the seat of German parliament, in over 100,000 square meters of fabric.

The wrapping expressed more than words ever could about the complex and harrowing culture of guilt, forgetting and memorisation still inextricable from German identity.

It was a swaddling of old wounds. At the same time, it offered the new Germany gift-wrapped to what would soon be the European Union. And knowing of the beleaguered state of the EU, the work – in memory and reproduction – speaks to us still.

Born in Bulgaria in 1935, Christo Vladimirov Javacheff began his career as a painter. But it was in land art where he made his name, alongside wife and longtime collaborator Jeanne-Claude.

Emerging in the 1960s, land art saw artists preoccupied with bringing art outside of the house, gallery, or museum to bridge the gap between art and nature. Land art is, more often than not, heroic in size, operating on a scale of energy and logistics at which most artists would balk.

Christo and Jeanne-Claude were responsible for a number of massive works that remain burned into the memories of many in reality and in reproduction: works of effort and massive gesture. Other works had an audacity tinged with witty and poignant politicisation. 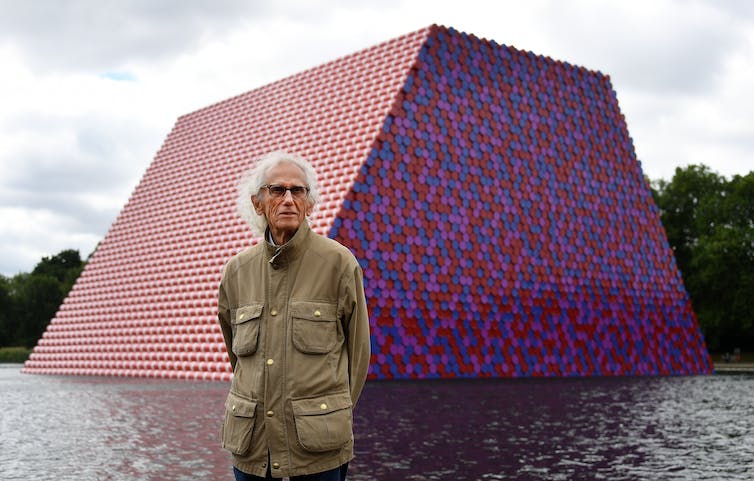 Christo with his work Mastaba, built on The Serpentine lake in London, 18 June 2018. Andy Rain/AAP

Jeanne-Claude died in 2009, and Christo continued working under the name of their partnership until his death this weekend in New York City at the age of 84.

The starting place of a legacy

Christo’s work has a particular significance for Australia: the very first wrapped work was staged in 1968-1969 at Little Bay in Sydney.

An enormous swathe of the landscape was covered in tonnes of plastic tarp, and wrapped to the coastline. It was something the Australian art community and public had never seen before or since, offering previously unseen sense of ambition and scale. It also inspired Australian artists to be more active abroad to try their own interventions there, albeit more modestly.

But too often conveniently forgotten about the work is it was devastating to the region’s wildlife and local ecosystem. Hundreds of birds who depended on the region for their sustenance and habitat died during the life of the project.

Ironically then, given the present predicament we are in, Wrapped Coast gives us more to think about than we might previously have anticipated. It is certainly a work that would not have been sanctioned today. We might remember it as an example of excesses of spectacle that have precipitated many worse consequences.

Read more: The heady sense of being at the heart of public art: 50 years of the Kaldor Foundation

This does not discredit the work – far from it. Rather, it is a work of talismanic importance standing now not only as an example of the possibilities of scale in art, but also as a corrective that may speak to our future actions and attitudes afresh much as it spoke to the generation of artists who were able to experience it in all its hubristic glory.

Following from Sydney, Christo and Jeanne-Claude would become known around the world for their work. They wrapped walkways in Kansas City, islands in Miami’s Biscayne Bay, trees in Basel, piers in Brescia, Italy. Their work played on other scales, too: placing 7,503 fabric gates throughout New York’s Central Park, and hundreds of umbrellas placed simultaneously in Japan and California. 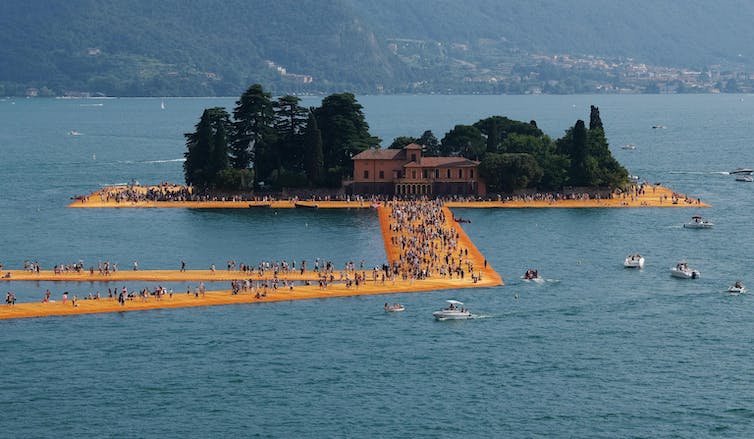 They encouraged the viewer to look on landscapes and buildings through new eyes. The absence of what was there causing the viewer to look deeper than they previously have. Their body of work is now firmly etched into 20th-century art.

It could be the nature and scale of their projects – given the logistics and art’s future due to the present – have receded faster into history than we had anticipated.

This may give us cause us to mourn more than the man, but what art had once been.