Back in the 1970s, scientists came up with a revolutionary idea about how Earth’s deep interior works. They proposed it is slowly churning like a lava lamp, with buoyant blobs rising as plumes of hot mantle rock from near Earth’s core, where rocks are so hot they move like a fluid.

According to the theory, as these plumes approach the surface they begin to melt, triggering massive volcanic eruptions. But evidence for the existence of such plumes proved elusive and geologists had all but rejected the idea.

Yet in a paper published today, we can now provide this evidence. Our results show that New Zealand sits atop the remains of such an ancient giant volcanic plume. We show how this process causes volcanic activity and plays a key role in the workings of the planet.

About 120 million years ago - during the time of dinosaurs in the Cretaceous period - vast volcanic eruptions under the ocean created an underwater plateau about the size of India. Over time, it was broken up by the movements of tectonic plates. One fragment now lies beneath New Zealand and forms the Hikurangi Plateau. 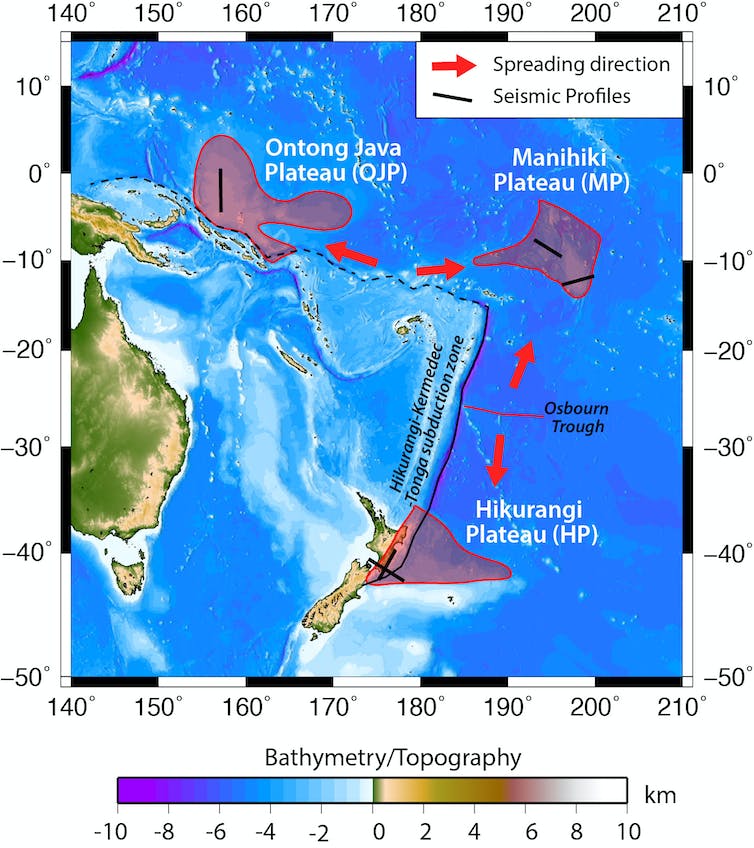 This map of the southwest Pacific and New Zealand shows the dispersed fragments of a once giant oceanic plateau. Red arrows show the directions of seafloor spreading. Straight black lines show the areas measured in our study. Simon Lamb

We measured the speed of seismic pressure waves - effectively soundwaves - and how they travel through mantle rocks beneath the Hikurangi Plateau. These vibrations were triggered either by earthquakes or deliberate explosions and reached speeds of 9 kilometres per second.

It’s well known these waves, known as P-waves, travel in the uppermost mantle of the Earth at a remarkably constant speed: around 8.1km per second (about 30,000km per hour). Even small deviations from this constant speed reveal important information about the state of the mantle rocks.

Since the late 1970s, fast P-wave speeds (8.7-9.0km/s) had been reported from a depth of about 30km under New Zealand’s eastern North Island. The seismic vibrations recorded in these early data were only travelling in one direction through a small part of the mantle, and the significance of the high speed was unclear.

Our new data is much more extensive, from a major seismic experiment in 2012 that spanned the southern North Island and offshore regions, including the Hikurangi Plateau.

It shows the speed of P-waves reached 9km/s, regardless of the horizontal direction in which they travelled. But a careful analysis of vibrations triggered by deep earthquakes showed unusually low speeds for vibrations travelling in the vertical direction.

This reveals crucial information about how the mantle rocks have been stretched or squeezed by the huge forces inside the Earth, and this turns out to confirm the existence of the elusive plumes.

The pattern of seismic speeds we observed requires the mantle rocks beneath the Hikurangi Plateau to have been stretched and squeezed in much the same way as one might produce a pancake shape by flattening a rubber ball. 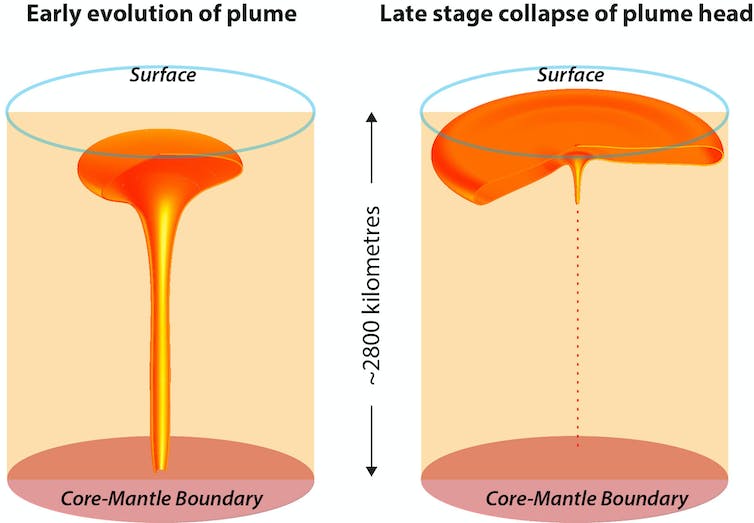 Computer simulations of a plume of buoyant hot rock in the Earth’s mantle rising up towards the surface from the core-mantle boundary. In the later stages, the plume head collapses under gravity to form a pancake shape. James Moore

When we carried out computer simulations of rising plumes in the mantle, we found they reproduced exactly this pancake flattening pattern, as the mushroom-shaped head of the plume spreads sideways and collapses near the surface.

We also looked at data from seismic experiments by international teams on other oceanic plateaux in the south-west Pacific region. Remarkably, both the Manihiki and Ontong-Java plateaux showed the same pattern as we observed beneath the Hikurangi Plateau. P-waves travelled at the same high speeds regardless of the horizontal direction, but at significantly slower speeds in the vertical direction.

Read more: Parts of the Pacific Northwest's Cascadia fault are more seismically active than others – imaging data suggests why

The major oceanic plateaux of the southwest Pacific are now dispersed, but we know how they once fitted together, about 120 million years ago. They formed a region underlain by a thick layer of volcanic rock, thousands of kilometres across. 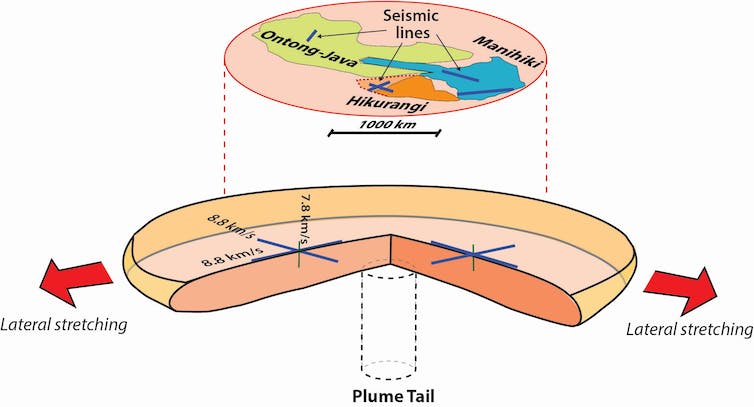 This reconstruction of oceanic plateaux at 120 million years ago shows how they fitted together above the pancake-shaped head of a superplume. Simon Lamb, Author provided

Our analysis shows this entire region lay above the single head of a giant plume – a superplume – which melted to produce massive lava outbursts over a geologically brief period of a few million years.

Siberia is the only other place on Earth where this pattern of P-wave speeds has been observed in the upper mantle. And it turns out this was also the scene of widespread volcanic eruptions about 250 million years ago, thought to be caused by the rise of a superplume.

This volcanic activity may have changed Earth’s climate and triggered a mass extinction that affected the evolution of life.

New Zealand and some scattered islands in the southwest Pacific are perched on the remains of what was once an immensely powerful geological force. We don’t know whether this process is still ongoing today, but our new seismic technique for finding these superplume remnants may help us discover more - providing further insight into the many connections between the deep interior of our planet and what happens at the surface.