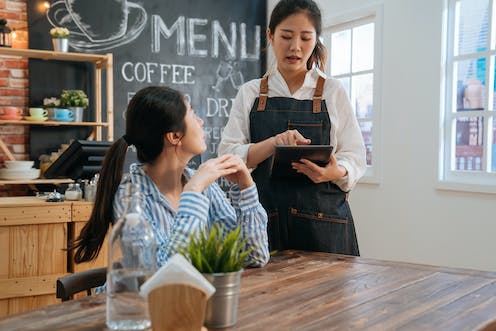 The Australian government’s A$130 billion JobKeeper payment – a wage subsidy to keep Australians in work – is vital for our response to the pandemic and future economic recovery.

There are nearly 90,000 temporary graduate visa holders in Australia.

International graduates on temporary visas rely solely on wage income to cover their living expenses. These visa holders mainly work in industries that have suffered majored losses, such as hospitality, and they are not entitled to the JobKeeker payment.

The Tasmanian government has just announced a $3 million support package for temporary visa holders which would include 485 visa holders.

This is a first from any state or territory government and will hopefully spur similar support from universities and other jurisdictions – including from the federal government.

It’s time for Australia to be reciprocal and take care of international graduates, who are major contributors to our economy and society, in their time of need. It’s both a humanitarian issue and a sensible economic strategy.

A major drawcard for Australia

International education is Australia’s third largest export – behind iron ore and coal – and its largest services export. It contributes almost $40 billion to the Australian economy and creates around 250,000 full time jobs.

The 485 visa was introduced in 2008 and updated in 2013, taking on recommendations from the 2011 Knight Review, which recognised post-study work rights for international students as crucial for Australia to remain competitive in the education export market.

Read more: Australia's temporary graduate visa attracts international students, but many find it hard to get work in their field

The top five citizenship countries of 485 visa holders in Australia have mirrored the top five source countries of international enrolments in Masters by coursework programs since 2013.

While international temporary graduates contribute to Australian tax revenues, they are not entitled to subsidised government services. This means they bring net income to the Australian economy.

They do not want to compromise their career goals or permanent residency outcomes.

For this reason, they may be exploited and willing to accept jobs outside their field and in industries most vulnerable to job losses during a crisis.

Census data shows cleaning, sales and hospitality are among the top five jobs for international temporary graduates. And many are front-line workers serving the Australian community, especially in aged care, health care, supermarkets and the cleaning sector.

Other countries support them

Australia’s current policy jeopardises not only these international graduates’ security but also its competitiveness as a destination for international students.

On April 3, Prime Minister Scott Morrison sent out a chilling message that international students and other temporary visa holders can return to their home countries if they were unable to support themselves.

Apart from the fact international graduates can’t return to their home countries due to border closures, many have signed rental contracts in Australia.

Others may be doing further studies.

The international education sector and universities, which rely on the 485 visa to attract international students, have a duty of care to these visa recipients.

Universities are projected to incur significant losses for the next three years due to its loss of international students.

But when the appetite for international education returns, Australia’s efforts to manage its international students and alumni in this period could reinstate its reputation and help its economic recovery.