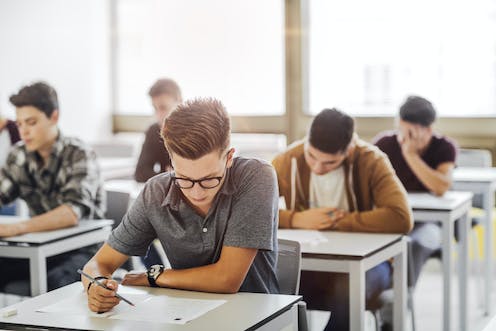 Schools have been progressively moving classes online due to the COVID-19 pandemic and there is uncertainty over what the next months may bring. This has thrown many year 12 students’ lives into chaos.

States and territories are yet to determine what will happen with final year exams. More than 180,000 students are expected to complete their final year certificates across Australia in 2020. This includes around 68,000 in NSW completing the higher school certificate (HSC); and 49,000 completing the Victorian Certificate of Education (VCE).

Victoria’s education minister has said year 12 exams may be moved to later in the year or even early next year. But students will still be able to get their VCE qualifications.

The NSW education department has determined the HSC will also go ahead; and similar statements have been made about the South Australian Certificate of Education (SACE) and other senior certificates across Australia.

A statement from the Education Council of Australia says a decision on exams will be made later this month.

But how will the move to online study, and the disruption of routine, affect students’ abilities to perform and, consequently, their grades? And what does this mean for university entry?

Exams and coursework across the states

In Australia most students finish classes in September, so they are about half way through their courses.

In NSW, students start their final year subjects in term four the previous year and finish classes late in term three, before doing trial HSC exams. Others, like the ACT, use credit systems where students accumulate course credits with no final external exam – again most students would have completed about half their credits in these systems.

Read more: Year 12 can be stressful, but setting strong and healthy goals can help you thrive

Some other states have less heavily weighted external exams. The ACT final score is based on school assessment, some of which might be exams. In South Australia external exams are worth 30% of the final SACE score.

The NSW Education Standards Authority (NESA) has given principals or system authorities the power to make decisions for the 2020 HSC in relation to formal assessments.

This essentially means school principals can give students fewer tasks, change when they are due and how much they count towards the final grade.

Similar advice exists in other jurisdictions such as Victoria and the ACT.

How this affects university entry

Once a student has their final year credentials such as the HSC or VCE, they are then ranked for university entry through a scaling system. The scaled grades are then converted into the Australian Tertiary Admission Rank (ATAR) which is used as the main entry criterion for university.

There are equity issues for students who plan to go to university as students are ranked across the ATAR. Students with access to higher speed internet and devices are at an advantage. This also the case for students whose parents can support them in their subjects, those who have space at home for their study and who can access tutoring.

Read more: What actually is an ATAR? First of all it's a rank, not a score

When we learn online, especially when we are new to it, we often revert to content transmission – it’s easier to study content than develop structured and interactive learning activities. This changes the nature of what teachers do and what students are prepared for in assessments.

Exam creators will need to ensure questions match this new reality and ask for factual recall. This means students with better online systems and those better at factual recall – a strength for exams – have an advantage in states where exams are weighted higher for their final certificate and the ATAR.

If schools focus more on the material many year 12 students have already covered before the move to online, this may help with the equity problem.

However, many students may feel short changed as they were preparing to give it their all towards the end of the year when the final tasks are weighted more.

Students studying subjects where they produce a major work, such as a piece of furniture or who have performances such as music and drama, will also likely have only had their knowledge components assessed to date. They would be relying on the final score of their major project.

Reducing the breadth of material covered, as a system wide response, is a sensible option – either the detail in each subject or number of options within subjects. The final exams can be reduced in length to accommodate this.

The school year can also be extended and the exams pushed back – although this will mean university entry will need to be delayed.

Major works, performances and vocational education placements are another issue altogether. Many students will need access to specialist resources and rooms in schools to prepare these, as well as transport to and from these spaces.

Seemingly this would be possible by having a trained adult overseeing the space and observing appropriate health protocols. But group tasks such as in drama may need creative solutions such as dialogues at distance and dance pieces without interaction.

Another option may be to cover the content now and the practical components later. This may disadvantage students in subjects with practical components such as art and technology, because they have greater affinity with production and performance than classic academic study.

Read more: Don't stress, your ATAR isn't the final call. There are many ways to get into university

We will need to ensure we recognise this change when calculating the overall year 12 grade.

Leaving grade calculations to individual schools could be problematic if schools try to game the system and get their student marks up (by, for instance, expelling low grading students).

There are several ways to mediate this.

All students in the ACT take a general aptitude test, (the AST), which is used to scale student grades.

In South Australia the final SACE grade is moderated by comparing students across subjects without the use of a major external exam such as in NSW.

A move to the ACT or SA approach in other jurisdictions this year can’t be ruled out. A further option is the Special Tertiary Admissions Test (STAT) which is used for university entry for non-school leavers.

This situation could also be the impetus we need to further the debates about the ATAR and if it should be recast for university entry. The current crisis may just show us some avenues to make the current system fairer for everyone.