Adelaide-born, award-winning playwright Stephen House has created many plays, exhibitions and short films. He usually directs and performs his work. Although writing poetry came to him early, he has only recently, in middle age, compiled his best poems in his first collection, real and unreal (2018). 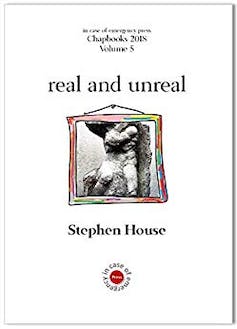 In it he offers a unique journey into worlds and ways that are not often written about. Self identifying as a “queer-nomad”, House describes himself as “definitely not straight”. While real and unreal doesn’t set out to shock, it deliberately opens doors that are mostly left closed. The poems are frank in their exploration of male queerness and raise social justice issues: the plight of the underclass (as House calls it), and the effects of homophobia, domestic violence, abuse, exploitation, sex work, poverty and discrimination. Take his poem “who we are”, for instance: a young man and woman jog together towards uspass us at the water’s edgefucking faggots he sniggersdisgusting she addsthey keep running on their way he lets go of my handit hurtsmore than their abuse did An observational tone The collection has an observational tone. There is often a sense House is on the outside looking in. He shares the world in which he lives matter-of-factly, whether it be chaotic, calm or an adventure down a dark alleyway. House left school at 15, worked in a factory and then travelled around for years living in the back of a car, doing odd jobs and working for short stints. he lives in an ragged tent amongst coastal gums i sleep in an old car moulded into sand-hill bush i cryi’m not sure why at my camp i make a driftwood firecook my foodwarm my body write a poemabout a driftwood mountain that changed my life (excerpt from “driftwood mountain”). 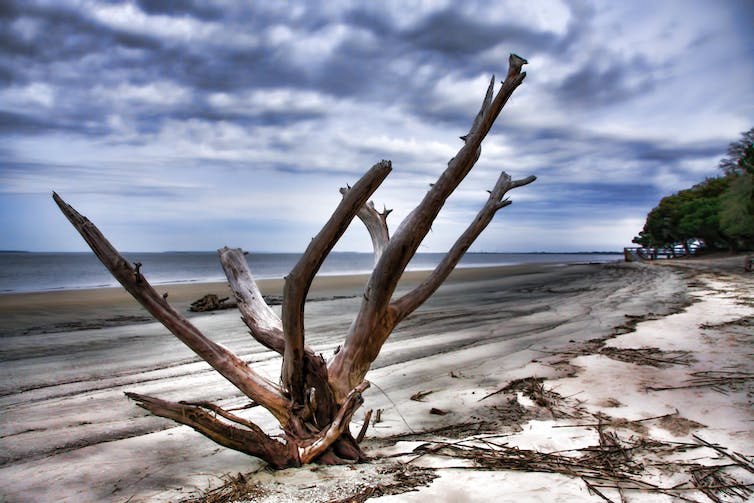 Evangelio Gonzalez/flickr, CC BY-NC-ND While forging a career as a playwright for 20 or so years, House was also writing and performing monologues. Although he hasn’t dropped theatre completely, he now tends to write poetry because of his growing fascination with glimpses of situations rather than full stories, and because poetry fits in better with life on the road. alonewith natureand self finally freefrom where I wasbefore (excerpt from the poem “self”). 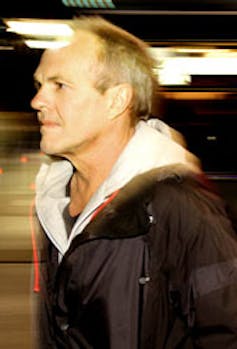 Stephen House. AustraliaPlays.org House’s poems usually begin with an idea that grows as he wanders along, taking in the environment around him. From there the scrawling starts; dot points and scribbles in a cafe or bar, alone. Then a process of refinement until the piece tells him it’s finished. He steers away from traditional forms of poetry, avoiding typical poetic conventions and rhyme unless it occurs naturally in sections. Just as he takes risks in life, he does so in his work: blurring forms and often swaying into prose poetry. once I thinkmaybe twice i’m not sure where and when i order a long blackhe looks at meman on man gaze (Excerpt from the poem “where and when”). Despite limited education or knowledge of literature, House has developed a unique, succinct voice. There is no single rhythm and no one structure in his work. The vivid world in which he lives and its translation into poetry is based on a flow of consciousness – and he works until, as he puts it, he knows it feels right. A spontaneous method His method is never the same – like his life, it is spontaneous. In the poem “when i write”, House opens up about his habits and thoughts on writing. Real work occurs in a kind of way that is sober and steady.Though still unmeasured and unplanned,it has the comforting foundation of safe and calm. Drinking writing never comes under the titleof writing properly; though I got that bizarre piece(about my appalling behaviour in “Paris”) down on paper,major drinking bender and all, so who the fuck knows… Conversely, sometimes his life is very scheduled, offering a program for his writing to occur: wake uppray to Lord Ganeshchant to Lord Shivawriteyoga in lounge roombreakfast in kitchenwritecoffee in cafewriteswim at beachwrite (excerpt from “write”). House’s work is not entirely autobiographical. Although he writes in the first person, a few of the poems are imagined stories. “Mummy” is the experience of a man confronting his homeless mother in a park, about the abuse he suffered as a child. When I interviewed House in Adelaide, he said he was told this true story, but when he tried to put it down impersonally, he felt it lost the immediacy. So he made it his own: I clutch the image and drift into what I was and live;grip tighter at her grimy claw. She murmurs.“What did you say, Mummy?” real and unreal is gritty, moving, dark and full of experiences that shock, sadden and entertain. The poems can be read as a collection, or individually in any order. … and if you’ve never jumped on a trainof indulgent destructionto find out who you areand lost almost everythingto a washy game of anarchypunctuated with humiliating dysfunctionyou can never understandabout coming backslowly and gradually (Excerpt from the poem “reflection”)