One spring morning in 1850, over 8,000 Sydneysiders marched through town to protest the resumption of transportation – the act of sending British criminals to Australia.

It was the largest protest in Australia thus far, an event Henry Parkes (later Premier of NSW) described as “the birthday of Australian democracy”.

One spring morning in 1850, over 8,000 Sydneysiders marched through town to protest the resumption of transportation – the act of sending British criminals to Australia.

It was the largest protest in Australia thus far, an event Henry Parkes (later Premier of NSW) described as “the birthday of Australian democracy”.

Transportation ceased in New South Wales in 1840. Over the following decade, colonists worked hard to transform their penal colony into a respectable civil society.

By the late 1840s, people like Parkes believed they were on the brink of not only greater self-government but perhaps even democracy.

However, Henry George Grey – Colonial Secretary in charge of all the United Kingdom’s colonial dependencies – had been planning to resume transportation. In 1849, he decided to test the waters by sending out a boat of convicts. When the vessel sailed into Sydney Harbour, thousands rushed to Circular Quay to prevent it from docking.

The people had been triumphant and confident they had sent a firm message.

They were, therefore, deeply outraged in 1850 when they discovered Grey was so indifferent to their protests, he was planning to send another boat.

Rallies and petitions were organised throughout NSW, including two, the press snidely described as “ladies petitions” in Sydney. 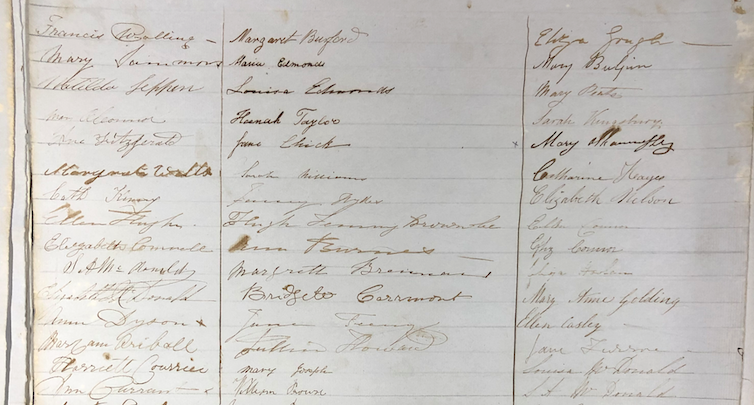 These were delivered to the NSW Legislative Council, then the UK House of Commons and Queen Victoria.

While historians have typically focused on the male orators and agitators of this age, these “ladies petitions” challenge the narrative of colonial democracy as created by men for men. These documents also suggest women could not have been completely confined to the domestic sphere, nor entirely excluded from politics.

For me, they also promised a rare encounter with voices difficult to hear within the colonial archive.

Although the right to petition the monarchy had been enshrined in British law since the Magna Carta, in the 19th century petitions were regularly used to galvanise the masses and give voice to those excluded from political processes.

By the time colonial women put ink to paper in 1850, over 10,000 petitions were tabled to British parliament each year.

While most petitions of this era were destroyed once submitted, a few survived. Much to my delight, after weeks of searching the stacks, Rosemary Sempell, archivist at the New South Wales Parliamentary Records, found the original 207 pages from the “female inhabitants of Sydney.” 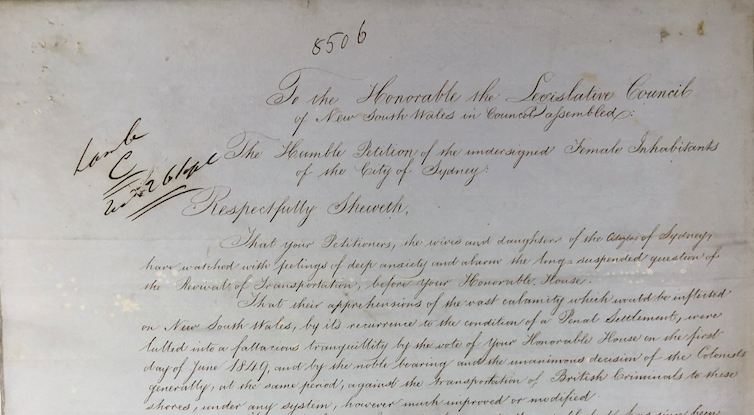 The petition reads: ‘To the Honorable the Legislative Council of New South Wales in Council assembled: The Humble Petition of the undersigned Female Inhabitants of the City of Sydney.’ Parliament of NSW, Author provided (No reuse)

The opening address describes the “deep anxiety and alarm” these “wives and daughters of the citizens of Sydney” felt in regards to transportation and how it would prevent them fulfilling their “sacred and responsible duties [regarding the] moral instruction” of the colony and their children.

Most of all, these women were furious Grey had repeatedly ignored the colony’s “solemn and unanimous” rejection of transportation.

Ultimately, it was this disrespect for due process and local authority that compelled these women to petition the Queen directly.

The petition was signed by a broad range of Sydney women: members of the colonial elite such as Lady Eleanor Stephens, middle-class mothers who feared the corrupting influence of convicts, and those who signed their names with a simple cross that suggested they may have had firsthand experience of transportation.

A rising of ‘sister politicians’

When this petition was tabled in Legislative Council, it was described as “the first of its sort” in Australia and conservative politician William Wentworth was quick to question whether members of the council should consent to such political activity.

He warned husbands “would have their dinners far better cooked, their shirts better washed” if their wives were not “political ladies”.

He also predicted such activity would encourage other petitions “praying for the rights of women”, perhaps even cause “some Mary Wollstonecraft” to rise up and instruct her “sister politicians” to ignore “their husbands” altogether.

Although the Australian suffragist movement did not begin in earnest for another 30 years, Wentworth may have been correct in connecting this moment of female activism with all that would unfold. At the very least, these petitions proved colonial women could unite against a common enemy.

A role for women

The women who signed this petition did so because they believed the colony was ready to chart its own course, and they wanted to be part of the process.

It might be telling that in the final sentence of the address the word “particularly” has been crossed out and replaced with “patriotically”. Although this may have been an editorial error, it suggests Parkes was correct: 1850 did represent a new spirit of “local feeling”. One that mattered to these women and was also effective in finally putting an end to transportation to NSW – as was resolved in the UK House of Commons the following month.

The colonial archive has encouraged us to assume only men were involved in the push for greater political freedoms in Australia. These “ladies petitions” confirm that thousands of Sydney women were not only present at the birthday of Australian democracy, but determined to play a role in its future.

In this first foray into the political domain, Australian women also proved they could have their voices heard: not only by other colonists and the British Parliament, but even, the Queen herself.

The author would like to thank the following individuals and institutions for sharing their expertise in the search for these petitions: Edith Ho, State Library of NSW; Bonnie Wilde, State Records of NSW; and Rosemary Sempell, Parliament of NSW Archives.