Predictably, both major political parties are resisting calls this week for a parliamentary conscience vote to declare a climate emergency in Australia.

The resistance is unsurprising because both the Coalition and Labor are still captive to the fossil fuel industry. Both fear alienating voters who believe that a mining job is somehow worth far more than a renewables job, though this is perhaps more true for Labor than the LNP.

A majority of Australians accept that climate change is happening, although, like the minister for natural disasters, David Littleproud, a surprising number don’t necessarily believe it is caused by humans. Moreover, when climate change is made an economic issue, many voters are less likely to support tougher action if they perceive this is going to impact on their cost of living.

Despite the fact he lost his own seat in the recent federal election, former PM Tony Abbott said the Coalition’s overall victory made this point abundantly clear.

Climate change vs the economy

There is no better illustration of Abbott’s zealous observation than in Queensland during the 2019 election.

Former Greens leader Bob Brown, believing he could turn the controversial Adani coal mine into another Franklin River dam, led a convoy of climate activists through Queensland towns. But pushing climate change as a moral issue became an insult to the coal communities there. 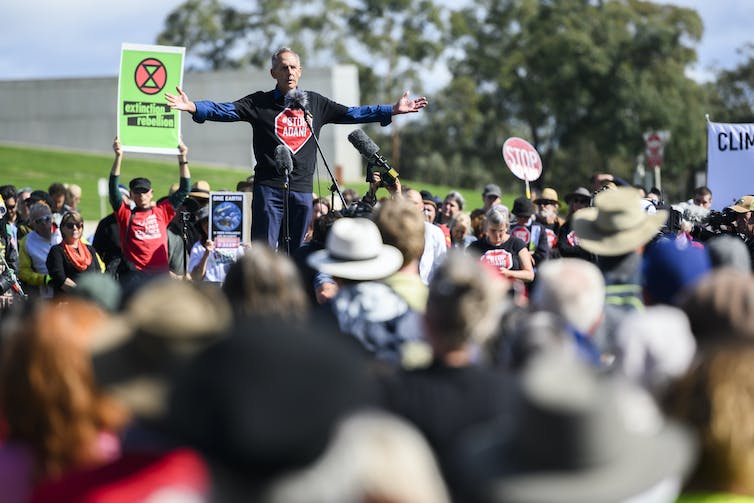 Labor also talked tough on climate change, with former leader Bill Shorten declaring in the final week of the May campaign:

It is not the Australian way to avoid and duck the hard fights. We will take this [climate change] emergency seriously.

At the same time, Labor vacillated over Adani. The party’s prevarication over climate led to much confusion, and when the votes were counted, it did not win a seat north of metro Brisbane.

Fast-forward to today, and the painful loss of the election has ensured that Labor isn’t taking any chances on coal.

coal remains an important industry for Australia and it remains part of the global energy mix.

And Labor may now be preparing to walk away from its ambitious climate target of cutting emissions by 45% by 2030, in favour of a focus on a net-zero pollution target for 2050.

Greens leader Richard Di Natale accused Labor of “caving in to the coal, oil and gas lobby” if it abandons its 2030 emissions reduction target, and added,

Labor will have lost whatever remaining credibility it has on the climate crisis.

The politics of a national emergency

In many city councils and certain electorates across Australia, declaring a climate emergency has been a clever strategy both for political consumption and to mobilise behavioural change on a local scale.

But on a national scale, where climate change is so heavily politicised, the declaration of a climate change emergency would be an unmitigated disaster for the major parties, and for the cause of effectively communicating climate change.

This is not to say that climate change isn’t anything short of an emergency. It absolutely is.

Read more: Sydney declares a climate emergency – what does that mean in practice?

The monstrous amounts of energy going into the oceans right now guarantees continued global warming that is fast heading towards the equivalent of the climatic violence of the Eemian period of 118,000 years ago.

And among the countless tipping points we are seeing unfold before us, the shock of a premature fire season in NSW and Queensland, with winter barely over, is just one way in which climate change is having an impact at a local level.

In some ways, there is no better time to raise awareness of climate change than during extreme weather events, as people are looking for explanations as to why they are occurring and how they can be so severe.

But to declare a national climate emergency, pushed so strongly by the Greens and independents, is not only politically difficult in Australia at the moment, it is also a hopeless communications strategy.

Here are six reasons why declaring a climate emergency is so deeply problematic.

1) Without bipartisan support, which is likely to be the case, it will further entrench the politicisation of climate change in Australia. Australians are already divided on anthropogenic climate change, and are increasingly afflicted by issue fatigue. This is precisely because climate change is thrashed about as a political issue (which turns on opinion) rather than a matter of physics (which turns on facts).

2) If such a conscience vote fails in parliament, it will marginalise any well-intentioned instigators as a partisan minority.

3) If ever such a conscience vote succeeded, it would merely come to serve as a symbolic cover for inaction in the face of steadily rising emissions.

4) Without meaningful decarbonisation policies, such a declaration would become a twisted apologia for such inaction, as long as political parties are able to spin national accounting carbon emissions figures.

5) Recent research by the Monash Climate Change Communication Research Hub found that the term “climate emergency” didn’t resonate with Australians as much as other phrases, such as climate change, global warming, extreme weather, climate crisis, and complex weather. Only 6.93% of Brisbane respondents and 4.03% of Melbourne respondents preferred “climate emergency” to the other terms.

6) By far the most overwhelming problem with such a declaration is that politicians are the least trusted sources of information on climate change.

To regain trust on climate change, politicians need to lead with genuinely effective policies and decisions, rather than the foil of a hollow sentiment that has no legal or economic status.

In the meantime, there needs to be better public understanding of the science behind climate change, delivered by trusted sources, that allows people to come to terms with the true urgency of the crisis.