Multinational ice cream company Ben & Jerry’s will close its Australian stores for this month’s global climate strike and pay staff to attend the protest, amid a growing realisation in the business community that planetary heating poses an existential threat.

It is one of hundreds of business in Australia and many more overseas that plan to support the strike on Friday, September 20.

Millions of people around the world are expected to take part in the schools-led civil action, led by 16-year-old Swedish student and climate activist Greta Thunberg. 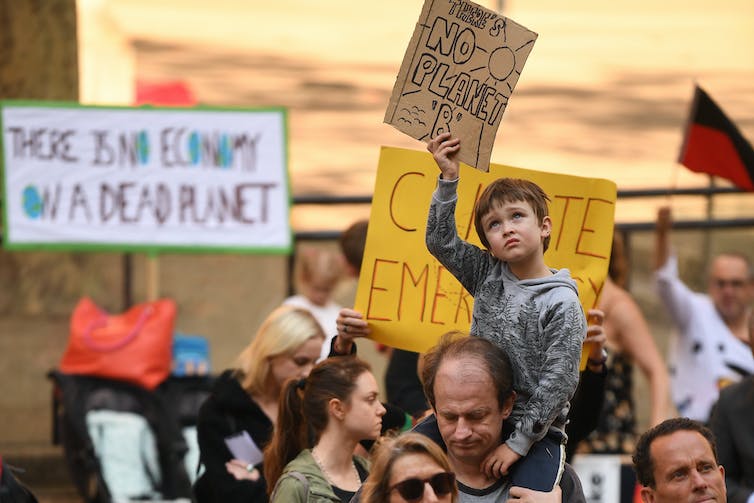 A young child holds a sign as part of a climate strike in Sydney in March 2019. AAP

The strike will call for decisive global action on climate change ahead of a major United Nations summit in New York on September 23.

Scientists themselves recently urged their colleagues to embrace political activism, even civil disobedience, arguing that using peer-reviewed research to influence policymakers has not brought about the radical change needed.

Ben & Jerry’s will close 35 shops across Australasia for the duration of the strike. The company’s Australian arm has declared that business as usual “is no longer a viable plan” in the face of a climate emergency. Or as the company says in its values statement: if it’s melted, it’s ruined.

No one will be spared from the effects of unmitigated climate change, and that includes the business community. That’s why I argue that all businesses should support the climate strike any way they can.

There is no escape

The Department of the Environment and Energy has warned of the pervasive effects on Australian business of higher temperatures, altered rainfall patterns and more frequent or intense fires, heatwaves, drought and storms.

The department says the changes will be felt “by every person and every organisation, public or private, and at all levels, from strategic management to operational activities”. 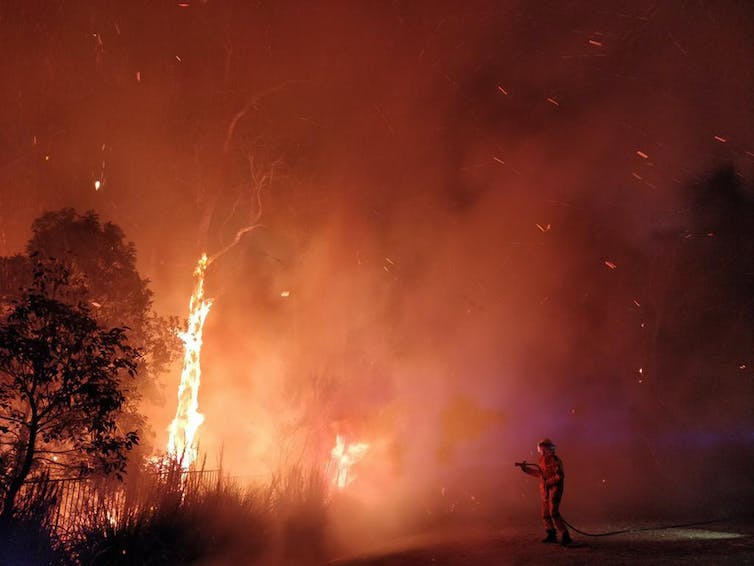 Firefighters battling a bushfire on the Sunshine Coast on September 9, 2019. Bushfires are expected to become more frequent and intense as a result of climate change. John Park/AAP

Many in the business sector recognise the looming challenge, including the Business Council of Australia which has called for a bipartisan energy and climate change policy framework.

So who’s already on board?

Ben & Jerry’s Australia and New Zealand marketing manager, Bert Naber, confirmed to me in an interview that the company would close its stores for several hours on September 20.

Staff will be paid while the stores are closed. The company is strongly encouraging staff to take part in the strike but their attendance is not compulsory. 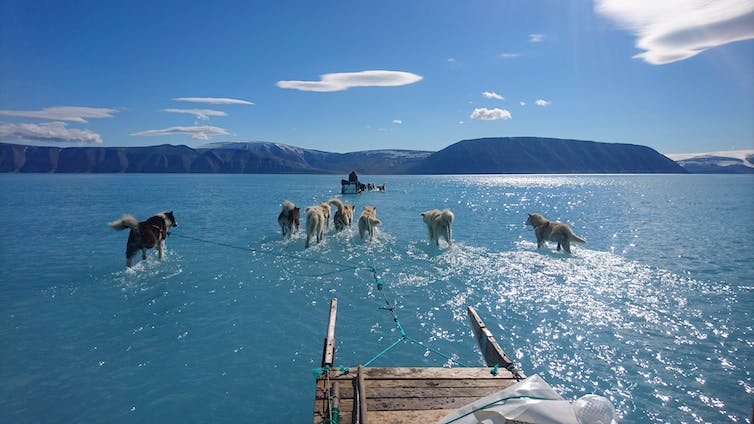 The company will also close its US stores for the strike, joining other retailers such as Patagonia, Lush Cosmetics, and personal care firm Seventh Generation.

Australian marketing agency Republic of Everyone is closing its business for the day. ounder Ben Peacock is encouraging his staff to attend the event and perhaps even take a volunteer role.

Other large organisations such as software giant Atlassian are making it as easy as possible for staff to attend. 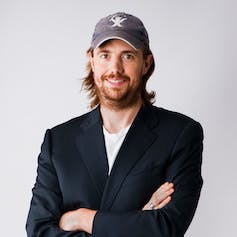 Cannon-Brookes co-founded Not Business As Usual, an alliance of progressive Australian companies pushing for greater action on climate change. As of September 9, more than 230 companies had joined the alliance and pledged to allow employees to strike including Future Super, Canva and Bank Australia.

On climate, business is a broad church

Calls from the Australian business sector for climate action have grown louder as the threat worsens. The sector has also demanded long-term certainty to assist with investment decisions - particularly energy businesses and large power consumers such as manufacturers. 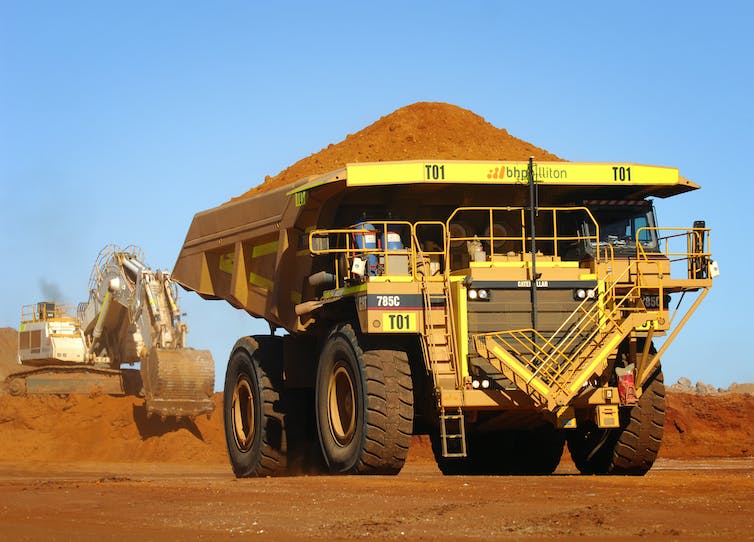 Operations at Ravensthorpe nickel mine in Western Australia, owned by BHP. The firm has called for stronger climate action. BHP

However across the business community, research indicates that views are split on the need for stronger climate action.

Some parts of the business sector, such as insurance, reinsurance, financial services, renewable energy and energy efficiency have advocated for strong climate action early since the 1990s.

There are exceptions. [Global mining company BHP], for example, is now calling for stronger action because it recognises that climate change is a huge global challenge that requires an urgent collaborative market and policy response.

Climate-aware investors are also calling on companies to act. They include superannuation giant HESTA, which recently demanded that Australian oil and gas companies Woodside and Santos link executive pay to reducing their emissions.

Advice for employees wanting to attend the strike

Of course, many employers will not be closing their doors for the climate strike and some workers will have to seek leave from their jobs to attend. The exact rules surrounding this will depend on individual awards or enterprise agreements.

In some cases employees may be able to negotiate an arrangement with their manager to enable them to participate in the strike. 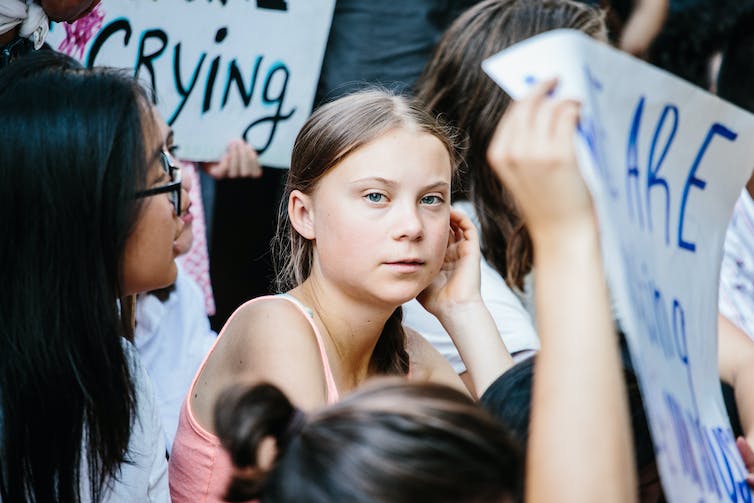 While I strongly support the strike, I do not recommend “chucking a sickie” or not turning up for work so you can take part. That approach is likely to make your employer unhappy and leave them in the lurch.

I recommend that employees providing vital services, such as paramedics and the like, support the strike in ways other than leaving their duties. Supporting events in the lead-up to the strike can be found here.

At the time of writing, 26 unions were listed on the Schoolstrike4climate website.

National Tertiary Education Union president Alison Barnes told me in an interview on September 4 that “the time for urgent action is now … we encourage people to take appropriate leave or make necessary arrangements with their employers to attend [the strike]”.