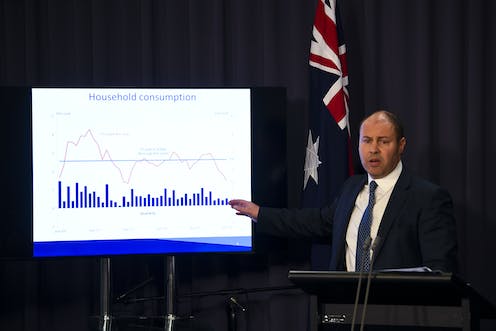 What comes first: the chicken or the egg?

What comes first: the chicken or the egg?

A week before yesterday’s news that Australia’s GDP growth is at its slowest in a decade, federal treasurer Josh Frydenberg signalled he was firmly in the supply camp.

In a speech to the Business Council of Australia, he put Australia’s 28 consecutive years of economic growth down to “the three Ps”: productivity, population and participation.

Productivity had contributed 1.7 percentage points of Australia’s 3.1% annual average growth rate over those years, Frydenberg said, with population and participation responsibe for the other 1.4 percentage points.

The three Ps refer to what economists call our “capacity” to produce goods and services. Productivity means how much output is produced per inputs used. Population and participation determine the number of people in the labour force.

This focus on supply-side factors in economic growth is the conventionally accepted one. But is it correct?

A different school of economic thought says it is not – that it errs in giving too little emphasis to the role of demand. This error is more than academic, because it may result in the wrong economic policies.

The conventional view about economic growth acknowledges demand is needed for businesses to want to produce goods and services. But it emphasises that boosting capacity to produce is ultimately what leads to greater demand.

It says increasing productivity (both directly through workers improving their skills and indirectly through using better technology in production) will lead to higher wages, because an employer will pay more to a more productive employee. Higher wages in turn lead to greater consumer spending.

As Frydenberg said last week, to guarantee higher living standards “we must tackle the productivity challenge”.

Lack of demand, in the conventional economic view, suppresses GDP growth only in the short term. It’s something that can be fixed by making markets work more efficiently. In the longer term what counts are capacity factors, with demand eventually adapting itself to supply.

Those who subscribe to this view don’t spend much time worrying that sluggish GDP growth might actually be caused by wage stagnation. If anything, they think stronger growth and a healthier labour market have to come first to get wages moving.

They also tend to be lukewarm about the idea that, when monetary policy (the Reserve Bank setting interest rates lower) appears ineffective, the key to lifting GDP growth is for the government to ratchet up fiscal policy and stimulate the economy with more spending.

Instead, they will argue for microeconomic measures – such as tax incentives to business, workplace reform, getting people off welfare and into work – intended to boost the three Ps.

An alternative “demand-led” view of economic growth has existed as an undercurrent in economics for as long as the conventional view.

It has evolved out of the first formalised economic models of growth, by English economist Roy Harrod and Russian-American economist Evsey Domar, in the late 1930s and early 1940s. These models were inspired by John Maynard Keyne’s critique of conventional economic theory.

The “demand-led” view says there is no automatic mechanism by which increasing productivity or the size of the labour force magically generates greater demand. It says improvements in productivity and labour-force participation are more likely the result of growth, not its cause.

Higher productivity, for example, usually comes from new technology, which is generally the result of new investment, which is driven by expectations of growing demand. Labour force participation increases when it becomes easier to get a job, and this occurs when businesses hire more people as they expand.

The demand-driven view of economic growth casts serious doubts on the conventional notion that growth in labour productivity must come before growth in wages. On the contrary, it suggests increasing wages may be needed to increase consumer spending and therefore create incentives for business investment.

It leads to very different policies to lift economic growth. If consumers and investors are unwilling to spend or invest more, and monetary policy is pushed to the wall, it’s up to the government to boost demand by spending more.

The Australian government, however, has staked its reputation as a responsible economic manager on delivering a budget surplus. If the conventional view of economic growth is in fact wrong, its policy cupboard is bare.