Only fish have gills, right? Wrong. Meet Hydrophis cyanocinctus, a snake that can breathe through the top of its own head.

The 3m species, which is native to Australian and Asian coastal waters, can draw in oxygen with the help of a unique set of blood vessels below the skin in its snout and forehead.

The network of blood vessels works very similarly to a fish’s gills, and represents a newly discovered addition to the extraordinary range of adaptations that sea snakes use to thrive below the waves.

Read more: There are dozens of sea snake species in the Indian and Pacific oceans, but none in the Atlantic or Caribbean. Why?

In evolutionary terms, sea snakes are relative newcomers to aquatic life, having evolved from land-based snakes only about 16 million years ago. This is much more recent than marine mammals such as whales and dugongs, which arose around 50 million years ago.

The roughly 60 known species of sea snakes have nevertheless developed an impressive array of adaptations to marine life. These include salt glands under the tongue, nostrils that face upwards and can be sealed by valves, paddle-like tails to facilitate swimming, and the ability to absorb oxygen and eliminate carbon dioxide through their skin.

Some sea snakes have even evolved light sensors on the tips of their tails, possibly as a way to avoid having them nibbled off by predators when partially hidden in crevices. 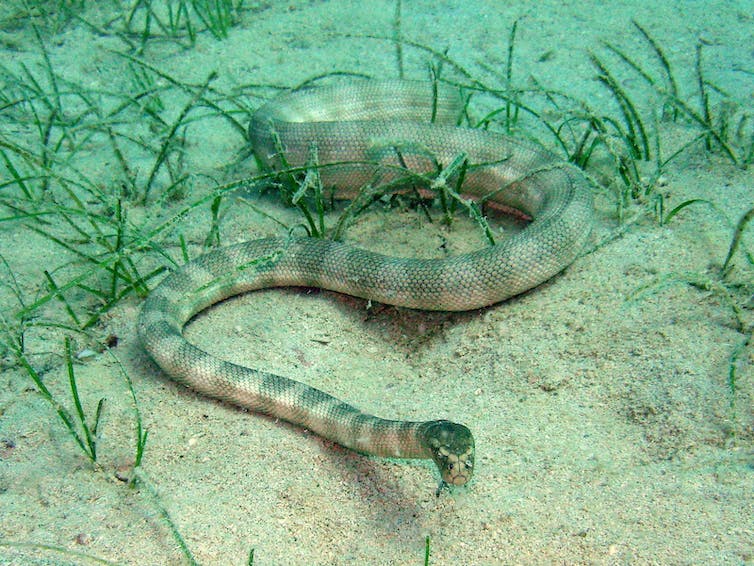 A mysterious hole in the skull

Just when we thought we had uncovered all the strange things sea snakes do, we discovered something new. As we report today in the journal Royal Society Open Science, the annulated sea snake Hydrophis cyanocinctus effectively has a set of gills on its forehead.

The first sign of something unusual was an odd hole (in anatomical terms, a “foramen”, the Latin word for “hole”) in the roof of this species’ skull.

This hole is reminiscent of the “pineal foramen” found in several lizard species, which contains a tiny light-sensitive organ called the pineal eye. Could sea snakes also have a pineal eye?

No trace of such a foramen has ever been found in a modern snake. In fact, snakes are thought to have lost the pineal foramen at least 100 million years ago, which is the age of the oldest reasonably complete fossil snakes.

Not an eye, but a lung

We decided to investigate this unexpected foramen in H. cyanocinctus more closely. We obtained some live specimens from Vietnam, where sea snakes are commonly sold as food in fish markets, and generated images of the soft tissues around the foramen using a combination of traditional and computer-assisted methods. 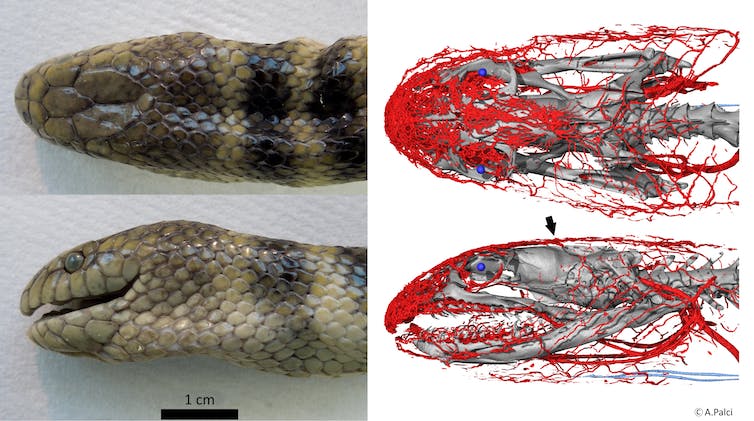 Head of the annulated sea snake (Hydrophis cyanocinctus) and its blood vessels (highlighted after digitally removing muscles and skin). Note the large vein connecting the network of blood vessels on top of the skull to the inside of the braincase (arrow). Alessandro Palci, Author provided

These images revealed that this snake does not have a pineal eye. What actually goes through the mysterious hole in its skull is a large blood vessel (sometimes paired). This blood vessel then travels forward and branches into a complex network of veins and sinuses immediately under the skin of the forehead and snout.

We then examined other snakes, both terrestrial and marine, using the same methods, and realised that this network of blood vessels in H. cyanocinctus is unique.

While a network of blood vessels is expected to be present under the skin of all snakes, what is special about H. cyanocinctus is the greatly exaggerated size of the blood vessels and the fact that they converge towards a single large vein that goes into the brain.

Gills on top of the head

This strange network of blood vessels makes sense when we consider that sea snakes can breathe through their skin. This happens thanks to arteries containing much lower oxygen concentrations than the surrounding seawater, which allows oxygen to diffuse through the skin and into the blood.

However, these low oxygen levels in arterial blood can cause problems, because the brain may not get the oxygen it needs. The dense network of veins on the forehead and snout of these sea snakes helps solve this problem by picking up oxygen from seawater and redistributing it to the brain while swimming underwater.

If you think that sounds similar to what fish do with their gills, you’re absolutely right. H. cyanocinctus has managed to evolve a respiratory system that works in much the same way as gills, despite the vast evolutionary distance between these two groups of species. Truly, these snakes are indeed creatures of the sea.