Nature. Some see it as beautiful and some as red “in tooth and claw”. Of course nature is dynamic, it changes between both the beautiful and the dangerous as in Blake’s famous words:

Tyger Tyger, burning bright, In the forests of the night; What immortal hand or eye, Could frame thy fearful symmetry?

With the support of the South Australian Museum, this year’s Australian Geographic Nature Photographer of the Year competition attracted hundreds of photographers who have attempted to frame the symmetry of nature’s danger and the beauty - both in landscape and living things. 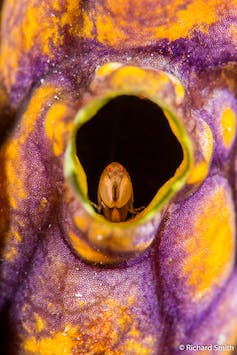 The finalists no doubt have mastered the photographers’ tools of trade - metering and focus; composition and colour; balance and visual weight. Experts have critiqued the work, announced winners, and awarded their grand prize. But does this exhibition capture the multiple dimensions of nature? Well, yes.

Nature is based on ecology and ecology is about dynamics and flows. Energy and material cycle through a balanced natural system where everything is used and nothing is lost. Sometimes, though, the balance is disrupted and cycles may be broken or forced to reform in novel ways.

The physical dimensions (length, breadth, depth) and the dangerous beauty inherent in a creature like an echidna leap out in a photograph titled “Under the Spikes” by Isaac Wilson. It captures both the fearsome spikes of an echidna and the beauty of shape and form within. 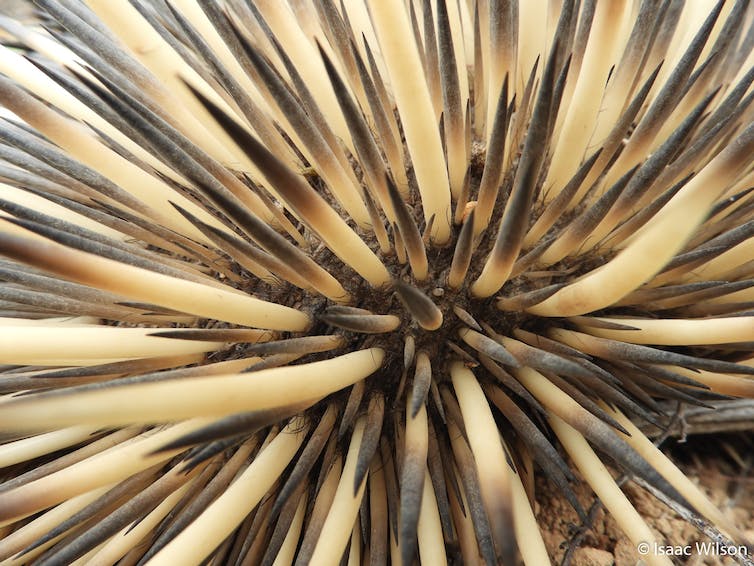 Under the Spikes by Isaac Wilson. South Australian Museum

Likewise, in the “Clash of the Crabs”, the photographer Samuel Horton has captured the spiky drama of the daily dance of solder crabs as they fight for their future. 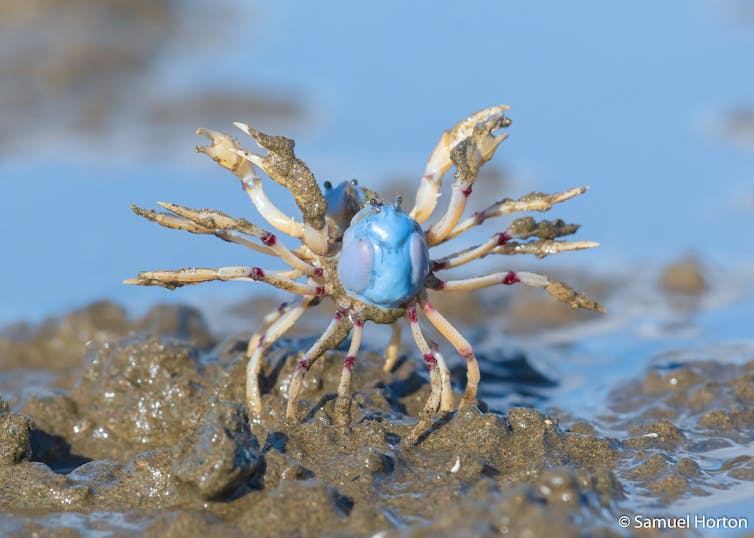 Clash of the Crabs, by Samuel Horton.

Others see the ecology at wildly different scales, which look alien yet beautiful to our eyes. “New Life in a Far-off World” by Wade Hughes shows what appears, at first, to be destruction by an other-worldly volcano. It turns out to be a sponge’s way of spreading its desire for life as spores across the seas. 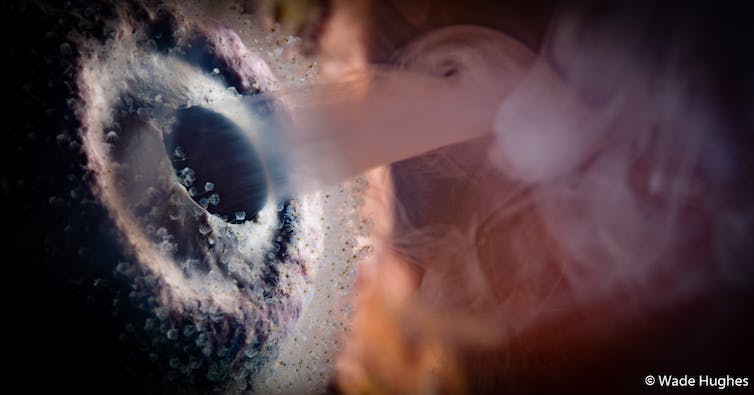 And in “Small but Mighty”, Richard Smith captures a steadfast soldier defending his crustacean family despite being small enough to live inside a sea squirt.

The image “Surge” by Reed Plummer returns to human scale, but shows us the awesome, daily power of nature. A breaking wave drops tons of water even as it pulls tons of sand from the sea bed.

“Barron Falls” by Neil Pritchard almost lets you hear the tumultuous violence of flood waters heading to the coast. Yet within this drama, the picture draws your eye to a single, small island of green that has found its space within the natural cycle of flooding noise and peace. 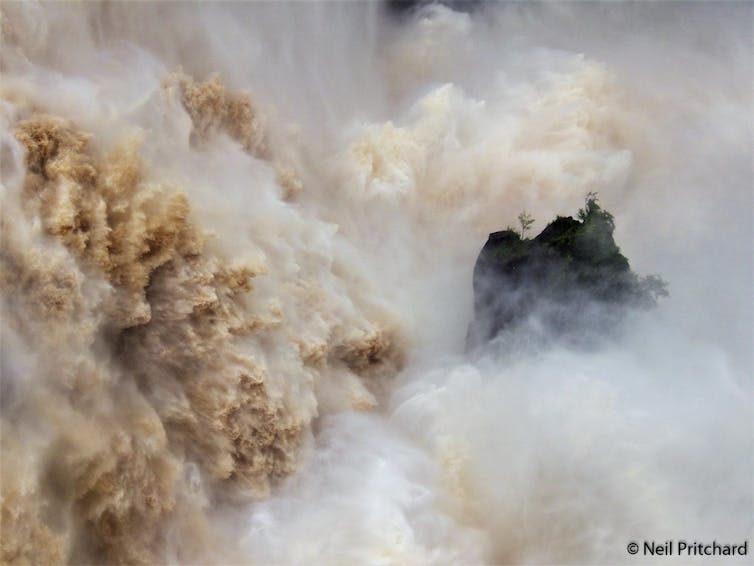 Tim Wrate’s “Above” at first looks like an Aboriginal painting. But, as you draw nearer, the image resolves into a complex maze of mangroves and salt in emerald waterways. You can feel the dynamics of the system and the interplay between life and water. 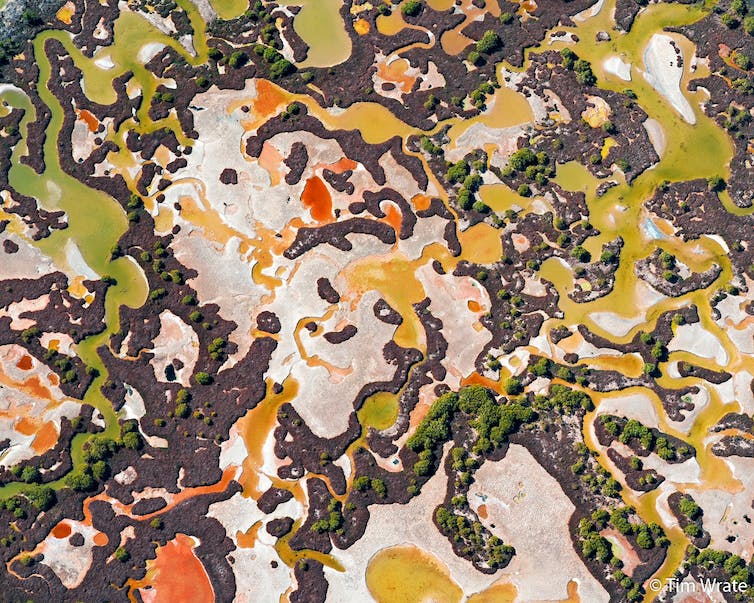 The jigsaw of cracked clay in “The Watering Hole” by Melissa Williams-Brown again draws the viewer into pattern. But as you follow the cracks out, a single kangaroo carcass reminds us of the cycles of water, with extreme droughts and floods. We disrupt or misinterpret this cycle at everyone’s peril. 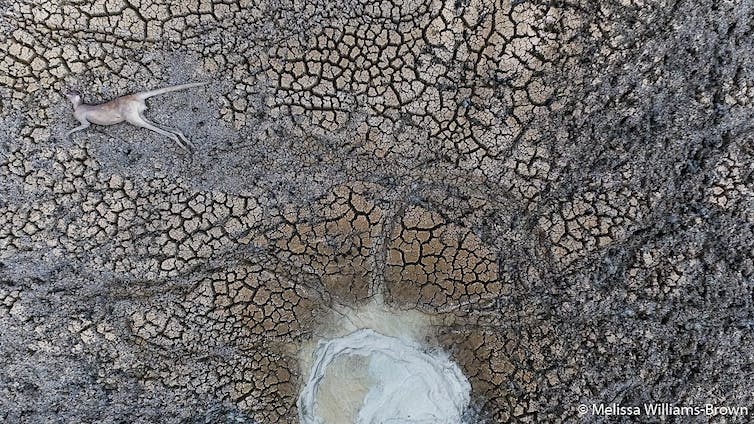 In nature, death can be beautiful. In “The Ghost of the Forest” (Marcia Riederer) an elusive mushroom, feeding on dead material, illuminates the green with its bioluminescence. Without such decomposers feeding on dead things, the cycling of essential materials would cease - no beauty, no death and no life. 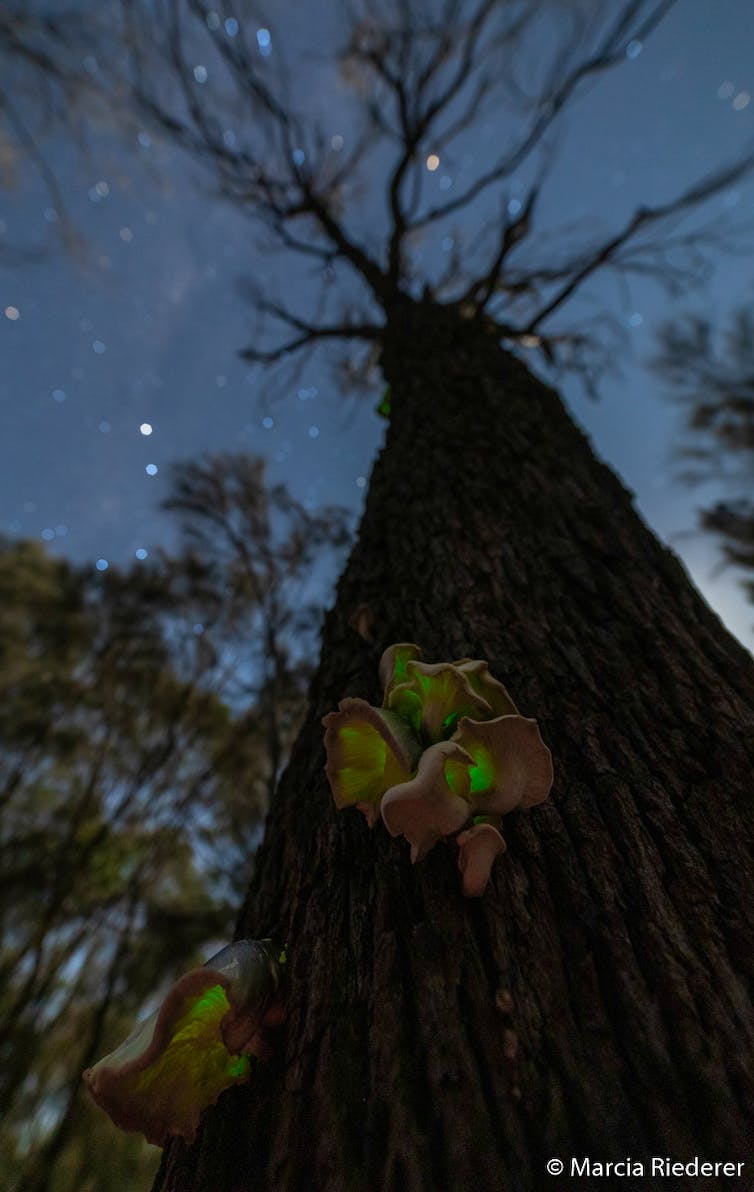 The Ghost of the Forest by Marcia Riederer. South Australian Museum

Some people hike for days to experience the beauty of these natural bio-lights, others avoid them for fear that the lights are the souls of the departed. In ecological terms, the luminescence attracts insects, which help disperse the mushroom spore and thus the future of this life form.

Other photographers have focused their lenses on points where the ecological cycles are disrupted. The disruption might be relatively small, like the Flying Fox new parent who almost drowns her own child while getting a drink in “Just Hanging On” (Neil Edwards). 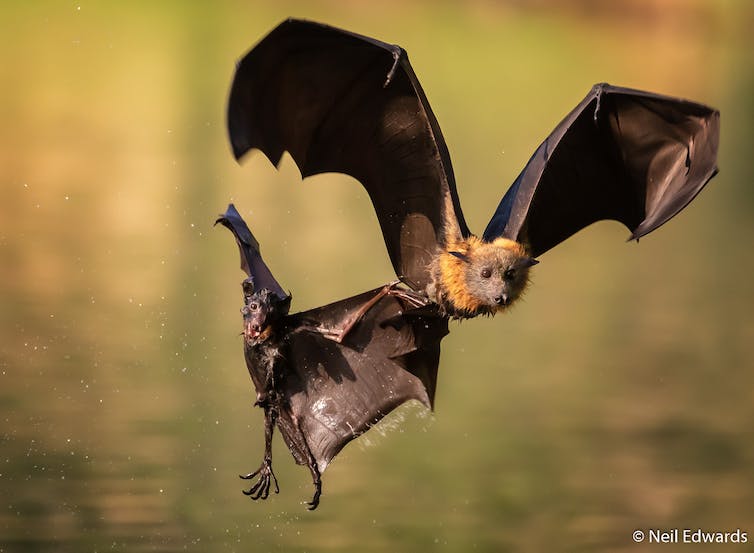 Did you know Flying Foxes drink by dipping into water and then licking their wet fur? “Foxes on the Wing” by Paul Huntley catches them doing it just right. 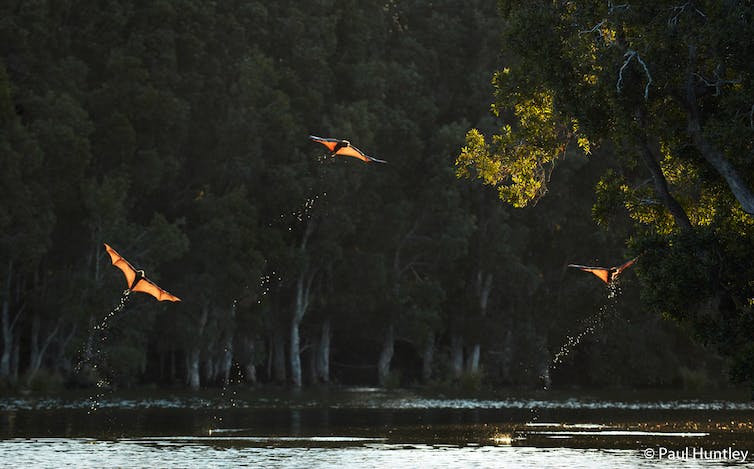 In Richard Smith’s “In the Can”, tiny fish, peering out of discarded packaging hint at much larger disruptions caused by human efficiency in taking raw materials. Is there a deliberate irony here that humans efficiently take raw resources but neglect to recycle those that now litter the otherwise barren ocean floor? 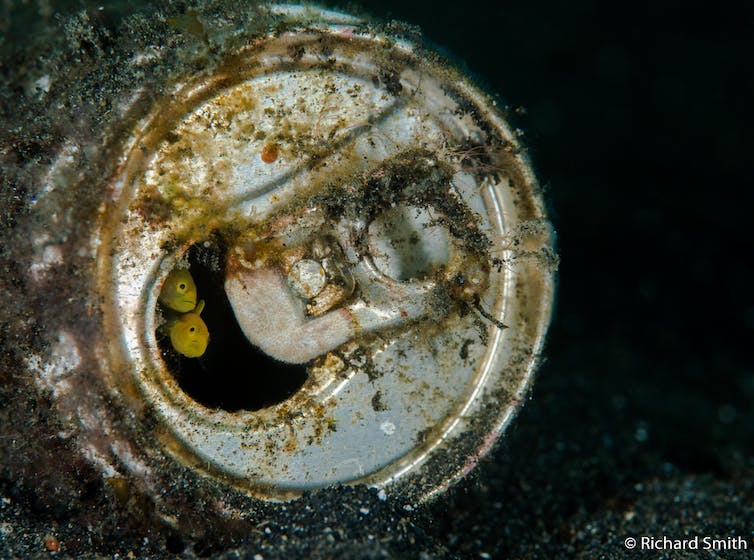 In the Can by Richard Smith. South Australian Musem

Other tiny eyes peer from within a roof cavity in “A Possum’s Lookout” (Gary Meredith). These small mammals may be taking advantage of a new preferred habitat created by humans, or they may have been forced out of their usual habitats by other animals or disruptions. 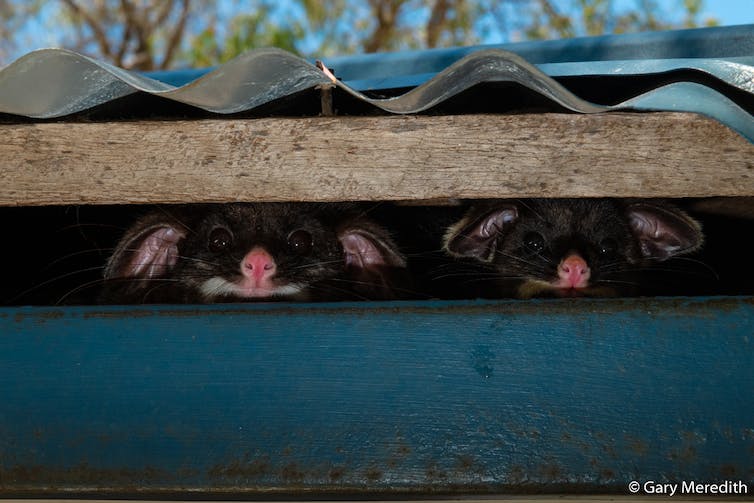 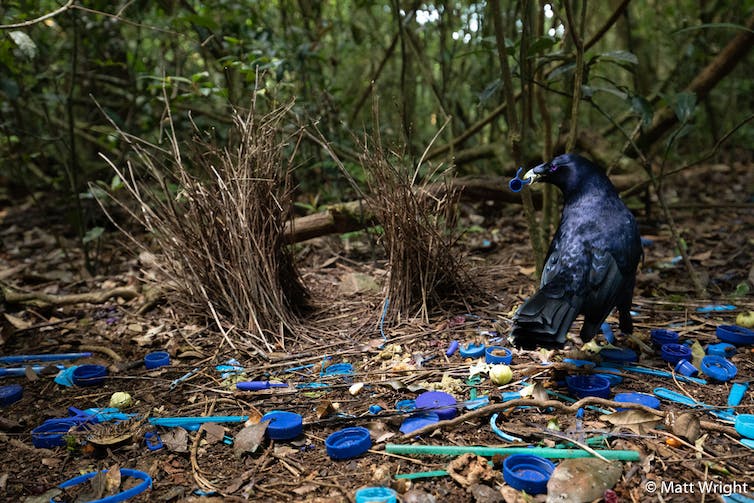 In this show, each photographer has brought a different perspective on nature. Each of these can enhance your worldview - allowing you to see the dynamics and resilience; the power and quiet; the destruction and rebirth inherent in it.

Next time you step out of your front door and see a tree in the street, really look at it.

See in it the young seedling of the past, its efforts to survive to the present, and the old senescent trunk full of decomposers of the future.

See in it the life of other organisms and how they use even the dead and ugly. See in it the beauty and power of nature “burning bright”.