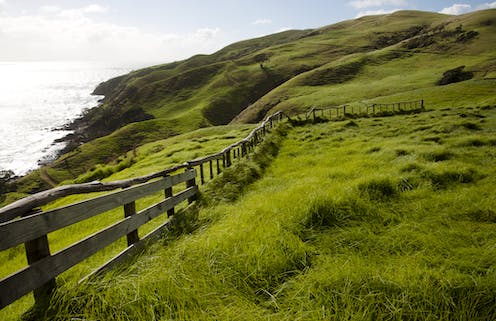 While growing grass takes up carbon dioxide, it emits it again back into the atmosphere when it is mowed or eaten.from www.shutterstock.com, CC BY-ND

If you have a question you’d...

CC BY-ND Climate Explained is a collaboration between The Conversation, Stuff and the New Zealand Science Media Centre to answer your questions about climate change. If you have a question you’d like an expert to answer, please send it to climate.change@stuff.co.nz I read somewhere that 1,000 square metres of grass absorbs the same amount of carbon dioxide that one person produces. I then think about my small 10ha property. Does that mean that I am covering 100 peoples’ CO₂ emissions every day? What about those large 1,000ha properties then? Do they absorb thousands of tonnes of carbon every year? In New Zealand, your average carbon footprint will be around four tonnes of carbon, emitted per year (based on the carbon contained in 16.9 tonnes of carbon dioxide equivalent annual per-capita emissions). A 1,000-square-metre area of grass will take up around one tonne of carbon per year. So if you didn’t fly much, lived in a well insulated home, cycled to work etc, you might bring your overall footprint down to around one tonne of carbon per year, the equivalent of what a backyard lawn may take up per year. So far so good. The big problem (causing tremendous confusion even among scientists) begins right here. In the above, we talk about fluxes, not pools. Using your bank account as an analogy, fluxes are transfers, pools are balances. Read more: Climate change is hitting hard across New Zealand, official report finds With your own carbon emissions, regardless whether they are one or four tonnes per year, you pay into the atmosphere’s account every year. This means that there is more and more carbon in the atmosphere. That carbon comes from fossil fuels – an entirely different “account”. Regardless of whether you have 1,000 or 100,000 square metres, this is what grass is doing in this analogy: it takes carbon from the atmosphere every year, but that carbon is going straight back to where it was taken from when you mow the lawn and the biomass is broken down and returned to the atmosphere. In other words, your carbon footprint is a flux that leads to a permanent change in a pool (the atmosphere). This is a bit like a weekly salary. You don’t have to pay it back. What your lawn is doing however, is making payments that are returned a few weeks or months later (when you mow the lawn, a cow eats the grass, or when natural turnover takes place). The bottom line is that short-term fluxes (as large as they might be) don’t matter if they are reciprocated by an equivalent but opposite flux. If you want, let’s do the experiment. You pay $1,000 onto my account ever odd week, and I pay $1,000 onto yours every even week. None of us will care – as little as the atmosphere will worry about the carbon that your grass patch briefly locks away from it. So your grass won’t lock away carbon dioxide from the atmosphere in the long run. Neither will any grassland in New Zealand. Read more: Climate explained: why plants don't simply grow faster with more carbon dioxide in air If you wait long enough, things can become a bit more complicated, namely if my payments back to you start to become a little less or a little more, causing dollars or carbon to accumulate on one account rather than the other. While this is the case in some ecosystems, such as a growing forest, New Zealand grassland is unlikely one of them. So your backyard isn’t helping, there is no way around reducing our greenhouse gas emissions.