Projects to build new artificial bones, learn how best to beat cancer, save Australia’s endangered frogs, and trap more carbon in wetlands were among the scientific endeavours recognised at the 2019 Australian Museum Eureka Prizes, announced in Sydney last night.

UNSW Associate Professor Darren Saunders was also recognised for promoting public understanding of science. The prize committee described him as providing “a clear, authoritative voice across a diverse range of media” particularly to vulnerable people needing cancer-related health advice. He has written a range of articles for The Conversation, including on why people get cancer, and why it’s more than just a case of bad luck.

Read more: Curious Kids: Why do people get cancer? 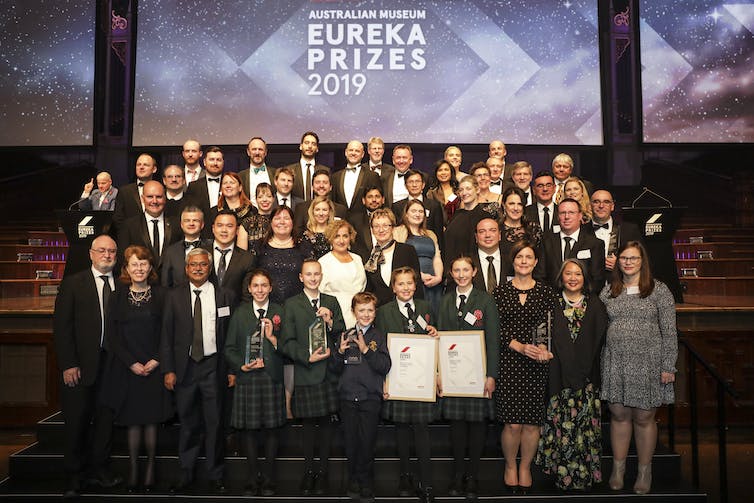 The Eureka Prize for Environmental Research was awarded to the Blue Carbon Horizons Team at the University of Wollongong, Macquarie University, and ANSTO. This project works to help protect and restore coastal ecosystems, allowing them to store more carbon and help guard against climate change.

The Australian Museum’s FrogID team won the prize for Innovation in Citizen Science. This conservation project asks members of the public to help protect Australia’s many frog species via a free smartphone app that records their locations. In just two years it has built a huge database of distributions, breeding seasons and habitats of frogs.

The Eureka Prize for Innovative Use of Technology went to Professor Hala Zreiqat of the University of Sydney, whose team has developed the world’s first synthetic biomaterials capable of healing large bone defects, even in load-bearing positions like the spine or lower limbs. They use 3D printing technology to make custom-fitted bone repairs which, unlike their metallic predecessors, blend seamlessly into the original bone.

The University of Melbourne’s Endovascular Bionics Laboratory won the Eureka Prize for Excellence in Interdisciplinary Scientific Research. This joint project with Synchron Inc. aims to help people with paralysis to move again, with the help of a “bionic spinal cord” called a Stentrode. This device interprets brain signals into commands, accessing the brain via blood vessels so as to avoid the need for risky open brain surgery.

The award for Outstanding Early Career Researcher was presented to Laura Mackay an Associate Professor at the University of Melbourne. Her research has revealed the importance of a particular type of immune cells, called tissue-resident T cells, in protecting against infection and cancer, and could potentially open up new avenues for treatment.

More details on the Australian Museum Eureka Prizes can be found here.