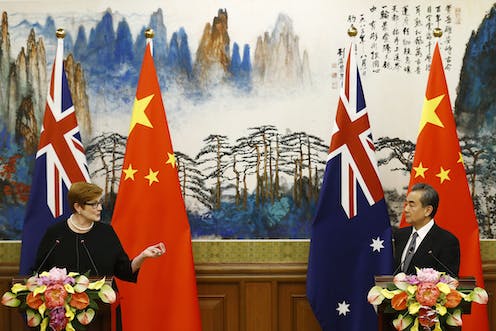 The Morrison government is at risk of losing control of China policy at the most critical time in Australian history.AAP/EPA/Thomas Peter/pool

The Morrison government is at risk of losing control of China policy. Push-back from within its own ranks is complicating its ability to manage relations with Beijing. China policy is being subjected to a...

The Morrison government is at risk of losing control of China policy. Push-back from within its own ranks is complicating its ability to manage relations with Beijing. China policy is being subjected to a buffeting from hawkish backbenchers who would like to see Canberra adopt a harder line.

Let’s dispose first of straw man arguments about whether Liberal backbencher Andrew Hastie was within his rights to warn of threats to national sovereignty by a rising China that is ruthlessly advancing its own interests.

Hastie has every right to raise alarms about China’s behaviour in his capacity as a member of parliament and chair of the joint parliamentary committee on intelligence and security. He was given opinion space in Nine newspapers to so.

Read more: View from The Hill: It's not in the 'national interest' for the backbench to shut up about China

However, he was ill-advised to use a reference to Nazi Germany to advance his argument about a China threat. Hastie may not have likened China to the Third Reich explicitly, but by referencing France’s inability to withstand German aggression he was implicitly making the link.

This is what he said:

The West once believed that economic liberalisation would naturally lead to democratisation in China. This was our Maginot Line. It would keep us safe, just as the French believed their series of steel and concrete forts would guard them against the German advance in 1940. But their thinking failed catastrophically. The French failed to appreciate the evolution of mobile warfare. Like the French, Australia has failed to see how mobile our authoritarian neighbour has become.

Invoking Nazi Germany or the Holocaust to advance an argument is treacherous terrain at the best of times, unless the author is clamouring for attention.

One wonders how much notice Hastie’s commentary would have attracted if there had been no reference to the inadequacies of France’s Maginot Line.

It’s reasonable to speculate that his contribution would have gone the way of those written by other China hawks in the so-called national security establishment, many of whom have converted their hawkishness on China into a cottage industry.

One other point might be made about Hastie’s contribution. It is simply not correct to say, as he did, there was a general expectation China would continue to democratise and in time become more like us.

This is a flawed and naive point of view.

China’s ruthless suppression of the Tiananmen Square democracy protests in 1989 was not an aberration. It was consistent with its behaviour since it began opening to the outside world in the late 1970s.

Read more: Thirty years on, China is still trying to whitewash the Tiananmen crackdown from its history

Its 1979 suppression of a Democracy Wall movement, and the arrest of prominent dissidents including human rights activist Wei Jingsheng, now in exile, attest to a regime’s ruthlessness in stifling dissent.

Beijing’s tolerance of Hong Kong’s pro-democracy protests will be viewed through a prism of what these might portend for the mainland. If there is any indication of contagion across borders, China will react forcefully, and may do so anyway if disturbances continue.

Before addressing what might be an appropriate response from the Australian government to an eruption of anti-China sentiment on its own backbench, perhaps it would be useful to define the challenges at play.

In its latest manifestation, China is no longer a status quo power. It is one that is seeking expand its power and influence in what it regards as its own sphere of influence in the Asia-Pacific, broadly defined to include the southwest Pacific.

These attempts to assert itself are not simply restricted to the militarisation of geographical features in the South China Sea. They also involve pursuit of an economic, diplomatic and propaganda offensive that is designed to advance Chinese interests at home and abroad.

In seeking to promote these interests, Beijing is an indefatigable exploiter of opportunities and weaknesses. If there is a rule of thumb in dealing with China in this latest phase, it is that it will seek to get away with what it can on many different fronts.

In that sense, Hastie has a point: Australia cannot simply adopt a passive response to Chinese single-mindedness in pursuit of what it perceives to be its own interests.

The question, then, becomes what to do?

This is where it becomes crucial that the Morrison government settles on a clearly defined strategy to deal with a disruptive China. What this should involve is a combination of a hedging strategy in partnership with Australia’s allies to balance Beijing’s militarised ambitions, and a separate one in which Australia’s own economic and diplomatic interests are asserted.

The government’s task will be to tread a fine line between security arrangements with its allies, principally the United States, and a relationship with China that is defined by Australia’s own interests and not those of anyone else.

In a thoughtful speech to Asialink before the G20 Summit in Osaka in June, Morrison outlined what appeared to have the makings of a “Morrison doctrine” on how to steer a course in treacherous waters between Australia’s security and economic lifelines.

The prime minister argued for a more activist diplomatic role in the region, aimed at securing Australian national interests in what are choppy waters. He said:

We should not just sit back and await our fate in the wake of a major power contest.

Australia could do worse than pursue an Asian equivalent of the Helsinki Accords that helped keep the peace in Europe during the Cold War.

This is a time for creative Australian diplomacy, not running off to Washington to hide behind America’s petticoat.

This returns us to the Hastie intervention and the national interest question.

Just as Hastie is entitled to express a personal point of view, so does the government of the day have a responsibility to assert what is in the national interest.

Clearly it is not in the national interest for political leaders to disregard comments that might have a negative impact on relations with Australia’s pre-eminent trading partner. China absorbs one-third of Australia’s merchandise exports.

This is what the prime minister had to say:

… the government is fully aware of the complexity that is involved in our region and the challenges that we face in the future… And we are careful as a government to ensure that we don’t seek to make them any more complex than they need to be. And that is what Australians can count on. We will be measured. We will be careful and we will put Australia’s national interest first.

Morrison needs to assert this point of view more forcefully if he is to avoid losing control of China policy. These is nothing inherently inconsistent between a national interest argument and one that enables dissident voices to have their say.

After all, this is not China.