Australia faces a massive challenge delivering suitable housing for an ageing population. The nation is expected to have nearly 50% more people older than 55 by 2036, with a projected increase from around 6.4 million in 2016 to 9.4 million in 2036. But what do older Australians actually want from their housing. And what can be done to ensure future supply matches demand?

A report released today by the Australian Housing and Urban Research Institute (AHURI) sheds light on older Australians’ housing aspirations. The research found housing meets the current needs of nine out of ten older Australians. But only around 70% thought this housing met their longer-term (five years or more) aspirations, so the other 30% would be seeking to move.

Regardless of their current housing tenure, 80% of older Australians want to live in a home they own, no matter the type, size or location. Overwhelmingly, this relates to a desire to live in long-term, stable housing, because of the security this offers in later life.

Importantly, our research shows two-thirds of older private renters were once in home ownership. Most of these households were forced, rather than chose, to enter the private rental market. This was often due to a relationship breakdown or financial hardship.

Where do they want to live?

The research includes a nationally representative survey of over 2,400 Australians aged 55 years and over. It was informed by focus groups in metropolitan and regional Western Australia, New South Wales and Victoria, and supported by in-depth interviews with later-life individuals and older Indigenous Australians.

Older Australians most commonly want to live in the middle or outer suburbs of a city. This aspiration increases with age.

Among those aged between 55 and 74, there was also a strong aspiration to live in small regional towns. This aspiration far outstrips the current proportion of this age group who live in such areas, suggesting an important role for City Deals and other regional initiatives in creating opportunities for older Australians. This, in turn, can also create jobs in the regions.

Those aged 75 and over were more likely to indicate a preference for the inner suburbs of a capital city.

Few older Australians wanted to live in the CBD of a capital city.

And in what sort of house?

Over two-thirds of older Australians want to live in a stand-alone house. The remaining third prefer an attached dwelling, apartment or alternative such as an ancillary dwelling – for example, a mobile home or granny flat.

The preference for larger dwellings drops sharply with age. Those older than 75 were more likely to prefer smaller dwellings. 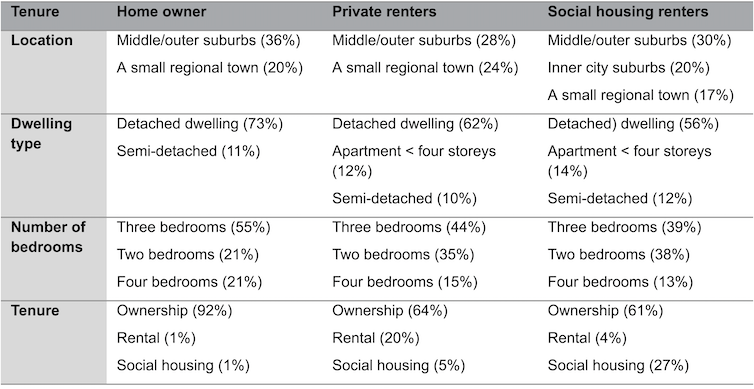 For a small but very important group, their current housing does not meet broad aspirations. These households are experiencing what we call a “housing aspiration gap”. Older Australian renters in the private and social housing sectors are the most likely to fall into this group.

The aspiration gap is due to the desire for home ownership and the relative security it offers. This is of particular concern given the falling rates of home ownership among younger Australians (which other parts of this research have explored.

A lack of planning

Many older Australians living in houses that do not meet their longer-term aspirations were not consciously planning or implementing strategies to achieve them. Social housing tenants (80%) were more likely not to actively plan, compared to 54% of home owners and 57% of private renters.

The most cited reason for not planning was because “there was no point, they would never meet their aspirations”, while home owners simply “hadn’t thought about it”.

A central housing information service that could guide households through their changing housing needs, providing details on all housing sectors, would help households to plan their housing for later life.

Currently, the forms of assistance we found older Australians were most likely to use to achieve aspirations were financial or legal advice, stamp-duty relief and subsidised rent in the private rental sector. The self-reported likelihood of being able to access these services generally decreased with age.

The biggest aspiration gaps are felt by those who don’t own their home. Their capacity to meet aspirations is a function of income rather than housing.

The research highlights the importance of home ownership in later life. Housing costs are lower for those who own their homes outright. The worrying trend of falling home ownership rates among younger cohorts will lead to major challenges for retirees who have to sustain rent payments into retirement.

Read more: Some states do better than others on affordable housing – we can learn from the successes

Read more: Co-housing works well for older people, once they get past the image problem

Of course, reforms that offer longer lease structures and greater security in the private rental sector are critical for those who are unable to enter or sustain home ownership. This might include tax or other incentives to provide for older Australians in housing need.

The retirement living sector also has a major role to play by offering a range of flexible products designed to suit the needs of older Australians in a variety of financial circumstances.

New types of housing options might also help bridge the gap between the security of home ownership and the relative insecurity of renting for older Australians who, in many cases, are asset-rich but income-poor. Our finding that two-thirds of older private renters had previously been in home ownership suggests a need for better policy to support households to maintain or re-enter this tenure.

Policies to maintain ownership would deliver long-term savings for government as the next step is the private rental sector, where households are likely to receive Commonwealth Rent Assistance and, if tenancies can’t be sustained, homelessness.