This month the world has been celebrating the 50th anniversary of Neil Armstrong setting foot on the Moon. But this week sees another scientific anniversary, perhaps just as important for the future of civilisation.

Forty years ago, a group of climate scientists sat down at Woods Hole Oceanographic Institution in Massachusetts for the first meeting of the “Ad Hoc Group on Carbon Dioxide and Climate”. It led to the preparation of what became known as the Charney Report – the first comprehensive assessment of global climate change due to carbon dioxide.

Read more: What is a pre-industrial climate and why does it matter?

It doesn’t sound as impressive as landing on the Moon, and there certainly weren’t millions waiting with bated breath for the deliberations of the meeting.

But the Charney Report is an exemplar of good science, and the success of its predictions over the past 40 years has firmly established the science of global warming.

What is this ‘greenhouse gas’ you speak of?

Other scientists, starting in the 19th century, had already demonstrated that carbon dioxide was what we now call a “greenhouse gas”. By the 1950s, scientists were predicting warming of several degrees from the burning of fossil fuels. In 1972 John Sawyer, the head of research at the UK Meteorological Office, wrote a four-page paper published in Nature summarising what was known at the time, and predicting warming of about 0.6℃ by the end of the 20th century.

But these predictions were still controversial in the 1970s. The world had, if anything, cooled since the middle of the 20th century, and there was even some speculation in the media that perhaps we were headed for an ice age.

The meeting at Woods Hole gathered together about 10 distinguished climate scientists, who also sought advice from other scientists from across the world. The group was led by Jule Charney from the Massachusetts Institute of Technology, one of the most respected atmospheric scientists of the 20th century.

The Report lays out clearly what was known about the likely effects of increasing carbon dioxide on the climate, as well as the uncertainties. The main conclusion of the Report was direct:

We estimate the most probable warming for a doubling of CO₂ to be near 3℃ with a probable error of 1.5℃.

In the 40 years since their meeting, the annual average CO₂ concentration in the atmosphere, as measured at Mauna Loa in Hawaii, has increased by about 21%. Over the same period, global average surface temperature has increased by about 0.66℃, almost exactly what could have been expected if a doubling of CO₂ produces about 2.5℃ warming – just a bit below their best estimate. A remarkably prescient prediction. 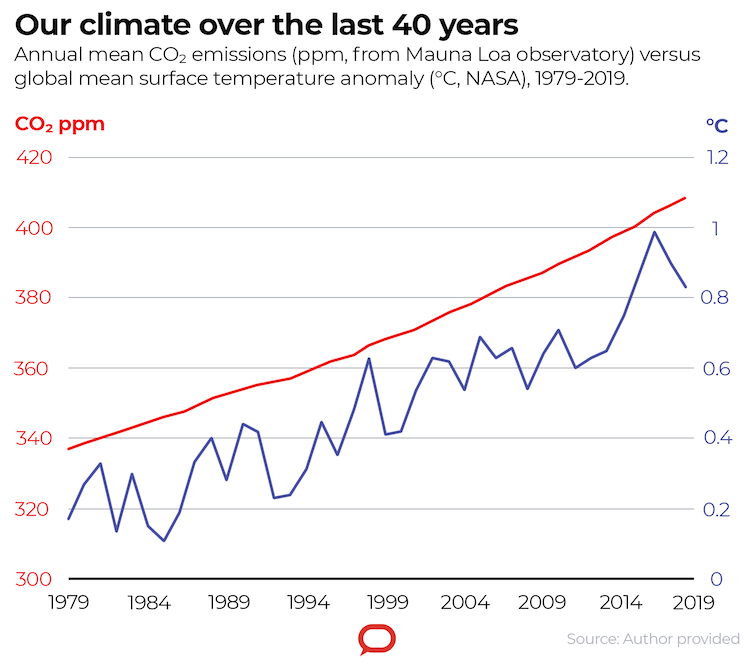 Author provided/The Conversation, CC BY-ND Reception of the article Despite the high regard in which the authors of the Charney Report were held by their scientific peers at the time, the report certainly didn’t lead to immediate changes in behaviour, by the public or politicians. But over time, as the world has continued to warm as they predicted, the report has become accepted as a major milestone in our understanding of the consequences our actions have for the climate. The current crop of climate scientists revere Charney and his co-authors for their insight and clarity. Strong science The report exemplifies how good science works: establish an hypothesis after examining the physics and chemistry, then based on your assessment of the science make strong predictions. Here, “strong predictions” means something that would be unlikely to come true if your hypothesis and science were incorrect. In this case, their very specific prediction was that warming of between 1.5℃ and 4.5℃ would accompany a doubling of atmospheric CO₂. At the time, global temperatures, in the absence of their hypothesis and science, might have been expected to stay pretty much the same over the ensuing 40 years, cooled a bit, possibly even cooled a lot, or warmed a lot (or a little). In the absence of global warming science any of these outcomes could have been feasible, so their very specific prediction made for a very stringent test of their science. The Charney Report’s authors didn’t just uncritically summarise the science. They also acted sceptically, trying to find factors that might invalidate their conclusions. They concluded: We have tried but have been unable to find any overlooked or underestimated physical effects that could reduce the currently estimated global warmings due to a doubling of atmospheric CO₂ to negligible proportions or to reverse them altogether. The report, and the successful verification of its prediction, provides a firm scientific basis for the discussion of what we should do about global warming. Over the ensuing 40 years, as the world warmed pretty much as Charney and his colleagues expected, climate change science improved, with better models that included some of the factors missing from their 1979 deliberations. Read more: Climate change or climate crisis? To really engage people, the media should talk about solutions This subsequent science has, however, only confirmed the conclusions of the Charney Report, although much more detailed predictions of climate change are now possible.