Greening our cities has become one of the great global imperatives of the 21st century including to tackle climate change. And Australia’s sprawling car-based cities are gradually changing to embrace green or living infrastructure.

Green cities bring together elements of architectural design and urban planning, often combining plants and built infrastructure to meet the needs of humans, such as our love of nature.

Read more: Australian cities are lagging behind in greening up their buildings

Living elements can be incorporated with built infrastructure at a range of scales, from individual buildings with green walls and roofs, through to citywide strategies. And there are a suite of strategies to guide more widespread integration of biological elements and ecological processes in cities.

In recent months, we profiled Australian examples of living infrastructure that show some of Australia’s approaches to developing green infrastructure, from greening Melbourne’s laneways to Canberra’s urban forest. These cities are already redesigning their water systems and implementing urban forest strategies to create green belts and protect and restore waterways.

Melbourne and Canberra provide some useful examples of the green cities movement, but to make it mainstream, these techniques need to be adopted widely through policies supporting more holistic and better integrated urban planning.

Why we need urban forests

Percival Alfred Yeoman was one of the first Australian pioneers of urban forestry. In 1971, he articulated a clear vision for enhancing cities with trees.

Local governments in Adelaide, Brisbane, Melbourne and Sydney, are implementing his ideas, committing to ambitious increases in urban canopy cover. Their targets range from 25% to 40%.

This revived interest in urban forestry comes from its well documented potential for accelerating the transition to more climate adaptive cities.

The social, environmental and economic benefits of urban trees, or “ecosystem services”, are becoming better recognised, including for their recreational and cultural values.

Melbourne has a rich legacy of urban parks and green belts thanks to planning decisions made in the city’s early years.

These parks underpin a new wave of urban greening, with projects that aim to deliver action on climate change, biodiversity and the health and well-being of communities.

Canberra is often described as “a city within a landscape” and the “bush capital”. But its higher altitude, hot dry summers and cold winters bring a set of challenges for green infrastructure.

With more than 800,000 planted trees, Canberra is an urban forest. But these trees require special care and attention given they are ageing and suffering from a hotter, drier climate.

Read more: How do we save ageing Australians from the heat? Greening our cities is a good start

The ACT Government has committed to action on climate change, legislating targets for 100% renewable electricity by 2020 and carbon neutrality (no net carbon emissions) by 2045. 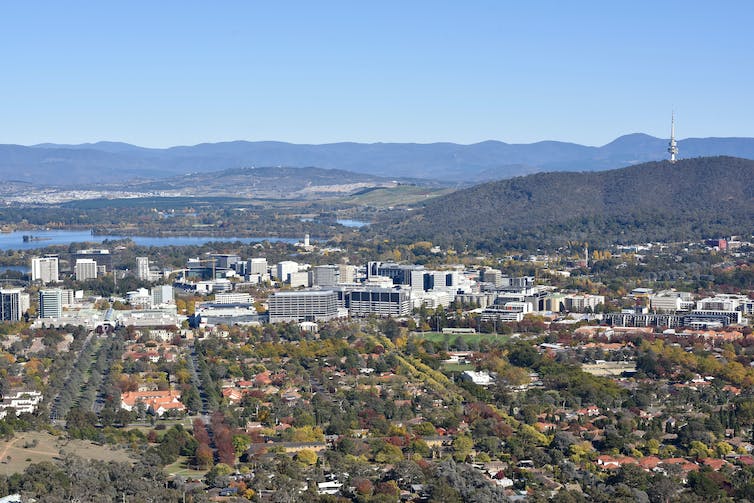 With more than 800,000 trees, Canberra is an urban forest. Shutterstock

Greening cities requires a holistic approach – for instance, not leaving the health of waterways entirely to water engineers.

Greening cities is more than just a technical challenge. Transforming the form and functions of urban systems, through urban forests and other living infrastructure, requires greater leadership and political commitment, integrated planning and community participation, and long-term thinking.

An integrated approach to greening cities involves mapping diverse opportunities and mobilising support for change in the community. As an example, urban storm water can be a productive resource when used in constructed wetlands or to irrigate urban forests. 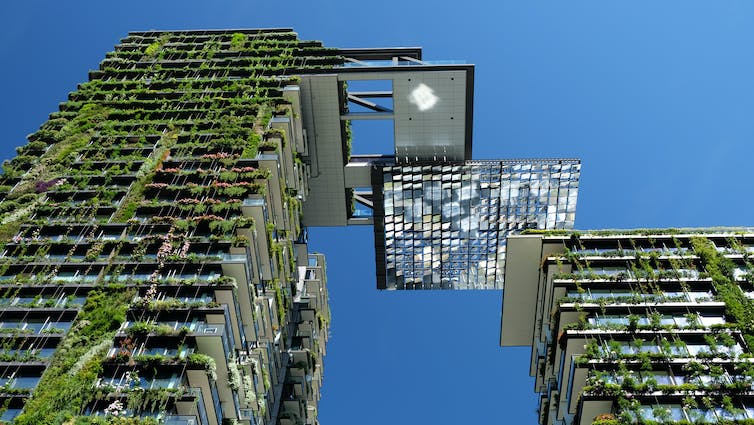 The vertical gardens in One Central Park in Sydney are globally renowned for their green infrastructure. Shutterstock

And often urban drainage lines and wastelands can be transformed into green spaces, but it’s worth recognising there is intense competition for space for housing.

But for more widespread adoption of integration, institutional support within local governments and metropolitan water and planning agencies is needed.

So to scale up living infrastructure in our urban landscapes, we must learn from local success stories, conduct more research, and better understand how to deal with climate adaptation and mitigation challenges.

Read more: If planners understand it's cool to green cities, what's stopping them?

Jason Alexandra would like to gratefully acknowledge the contributions of Barbara Norman to this article.