Astronomers have spent the past dozen years hunting for fast radio bursts (FRBs) – flashes of radio waves that come from outer space and last just milliseconds. And after a dozen years of work we still don’t know exactly what causes them, only that it must be something very powerful, as they’ve clearly travelled a long way (billions of light-years).

FRBs are difficult to study because they’re unpredictable, hard to detect, and when you find one you need a special kind of telescope to get the right resolution to work out which galaxy it came from.

Most FRBs appear only once, although a couple of per cent of them are “repeaters” that reappear at the same spot in the sky (although not in any regular pattern).

In research published today online in Science, we’ve managed to locate the home galaxy of a one-off FRB – the first time anyone has done this. In 2017, another team determined the home galaxy of a repeater, but that’s (relatively) easy job: it repeats, so you get a chance to point other telescopes at that spot on the sky. Our challenge was much harder.

So how did we do it?

But in the past few months we’ve been setting up our new killer app, a “live action replay” that would let us localise an FRB for the first time.

One of us (Shivani) was working late one night, studying a previously discovered FRB and also monitoring the ongoing ASKAP observations. Around 1am she noticed that ASKAP’s software had stopped working, and ASKAP wasn’t recording any data. She restarted the software and headed to bed.

The next morning Shivani woke up, checked her inbox, and saw ASKAP had sent her a lovely message: it had found an FRB! 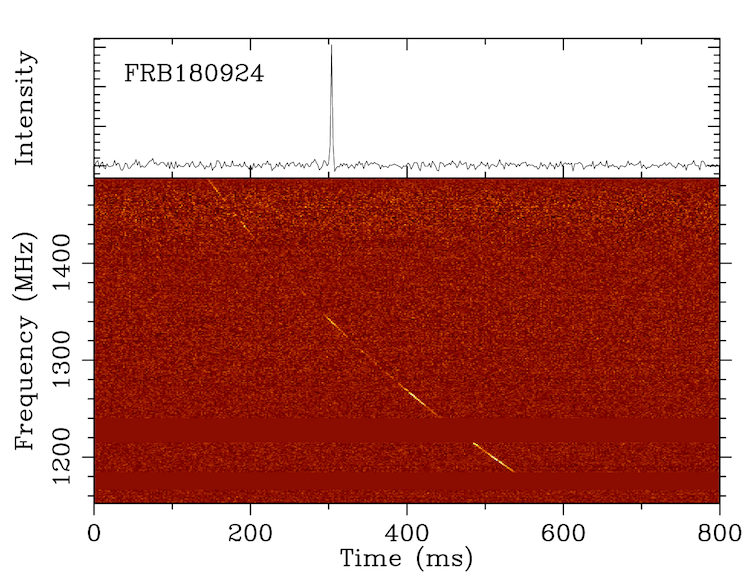 Top panel: FRB180924 was only 1.3 milliseconds long. Bottom panel: This image shows the brightness of FRB180924 at different radio frequencies and times. The curved shape from top-left to bottom-right is due to an effect called dispersion. The gas the FRB travels through slows down the FRB at lower frequencies, causing it to arrive later. This effect allows astronomers to measure how much gas the FRB has gone through on its journey to the Earth. CSIRO/Shivani Bhandari

But it meant more than that: we knew that our new live action replay had worked, and we would finally be able to find out this FRB’s home.

Keith saw ASKAP’s message too, and ran cheering through his house, waking up his children (who were as pleased as he was, having lived through their dad’s quest for FRBs from day one).

Then followed a ten-day frenzy of data processing, coding, checking and double-checking. We would stop at nothing less than the name, address and phone number of this burst.

We split our team into two groups that worked independently. When it came time for the final check, we put two images on top of each other and they agreed. The two groups had localised this FRB to exactly the same part of the sky. We had determined its position to within the size of a galaxy. If there was a galaxy there, we would know the FRB’s home.

Read more: More 'bright' fast radio bursts revealed, but where do they all come from?

We searched an archive of optical images and quickly found a galaxy at the right spot. Then we notified our collaborators around the world, who had been waiting to trigger telescopes when we gave them a galaxy to look at.

They used three of the largest optical telescopes in the world – Keck, Gemini South, and the European Southern Observatory’s Very Large Telescope – to make a detailed image of the galaxy and take spectra (which give us its distance). 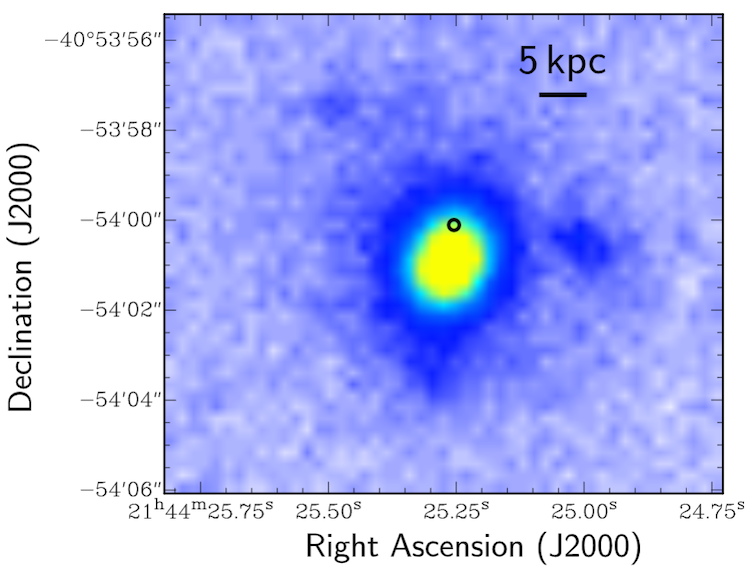 When the data came in, everything was a surprise. The only other “home” galaxy we had to compare it with was the repeater’s. Our FRB’s galaxy was 1,000 times bigger, and contained much older stars.

What’s more, our FRB came not from the centre of the galaxy, as some astronomers had expected, but from its outskirts (or at least its suburbs). At the very least, this means our FRB wasn’t produced by a gigantic black hole at the galaxy’s centre (one of the many ideas that’s been on offer).

Even with just a sample of two, we can say that FRBs have diverse home galaxies.

Read more: The search for the source of a mysterious fast radio burst comes relatively close to home 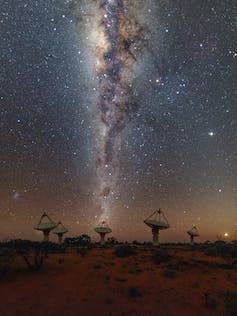 What’s more, now we can pinpoint where the bursts come from we can use them as tools.

FRBs interact with matter as they travel through space and are altered by all these encounters. We can “read” these alterations, combine them with how far the FRBs have come from, and work out how much matter they’ve met.

We hope that this will uncover the so-called “missing matter” that astronomers have been fretting over for years. This is not the notorious “dark matter” (whose nature we don’t know), but just run-of-the-mill baryonic matter that we think should be in space yet haven’t been able to detect very well. At long last we’ll be able to tidy up our cosmic accounting.

The next task is to localise many FRBs so as to obtain enough to understand their cosmic evolution, the type of galaxies they come from and ultimately solve the mystery of their origins. The fun has just begun!