We might not want to believe it, but human trafficking and slavery happens in Australia. Slavery is not an historical artefact, but a tragic reality for millions of people around the world, including in Australia.

Recently, the term “modern slavery” has been used to contrast contemporary forms of slavery from historical slavery such as that seen during the transatlantic slave trade.

In practice, modern slavery is an umbrella term that is often used to describe human trafficking, slavery and slavery-like practices such as servitude, forced labour and forced marriage.

But slavery is timeless. It has always been about the commodification of the body of a man, woman or child, the theft of liberty and sometimes life.

In 2018 alone, Anti-Slavery Australia helped over 123 people who had been trafficked to or from Australia, or had faced slavery-like conditions while in Australia, including forced marriage, servitude and forced labour.

But this is just the tip of the iceberg. A recent report by the Australian Institute of Criminology estimates that only one in five victims are detected. This means that the cases we see are likely to be a small proportion of the scale of trafficking and slavery in Australia.

Vulnerable people of any background or status can be cruelly exploited. Some groups, such as migrant workers or young people, are more vulnerable than others.

So what does modern slavery look like in Australia?

Here are four real world examples, with names of individuals and businesses changed, to explain the different kinds of exploitation seen at Anti-Slavery Australia and considered in Australian courts.

In Australian law, slavery is defined as

the condition of a person over whom any or all of the powers attaching to the right of ownership are exercised, including where such a condition results from a debt or contract made by the person.

Essentially, slavery is when a person is controlled as if they were mere property. 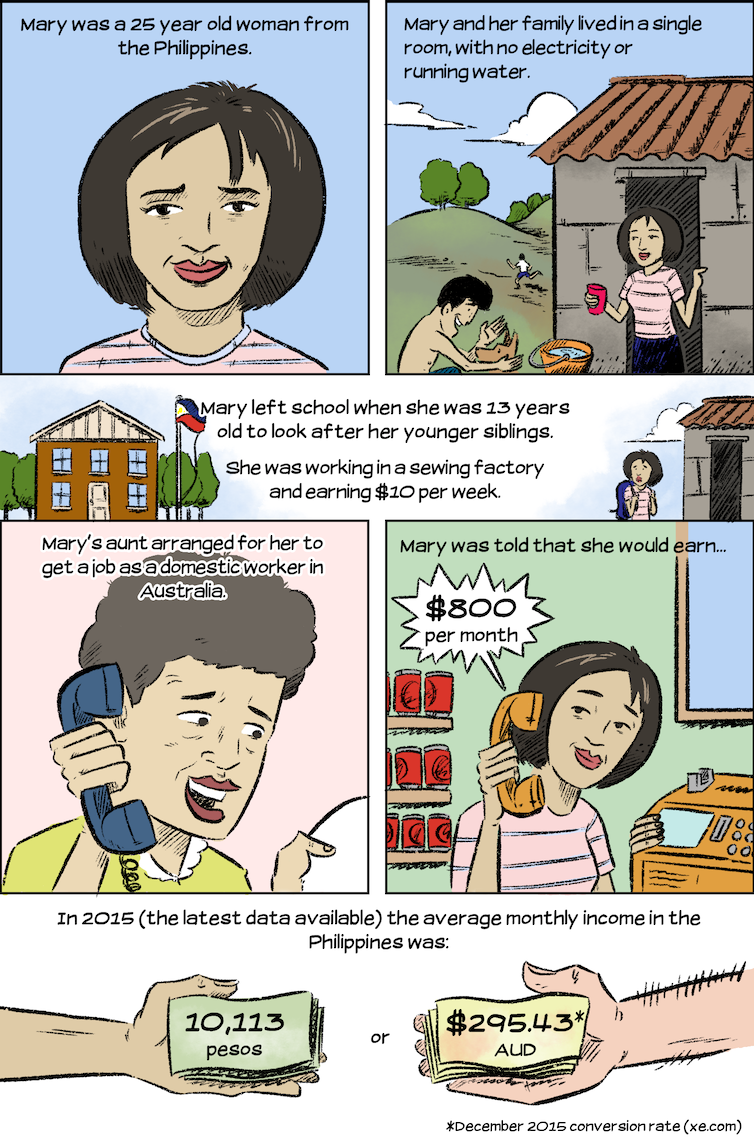 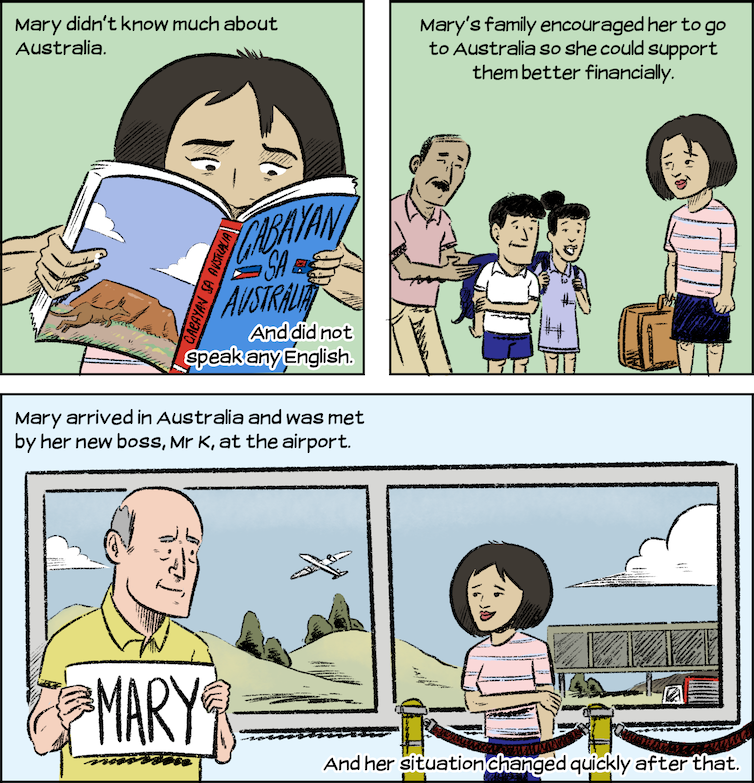 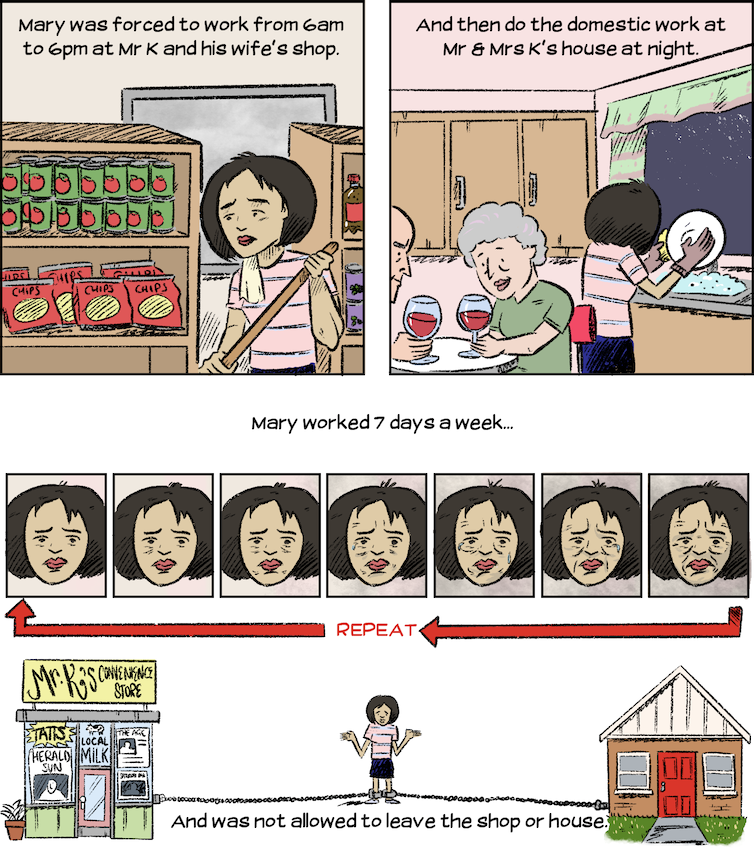 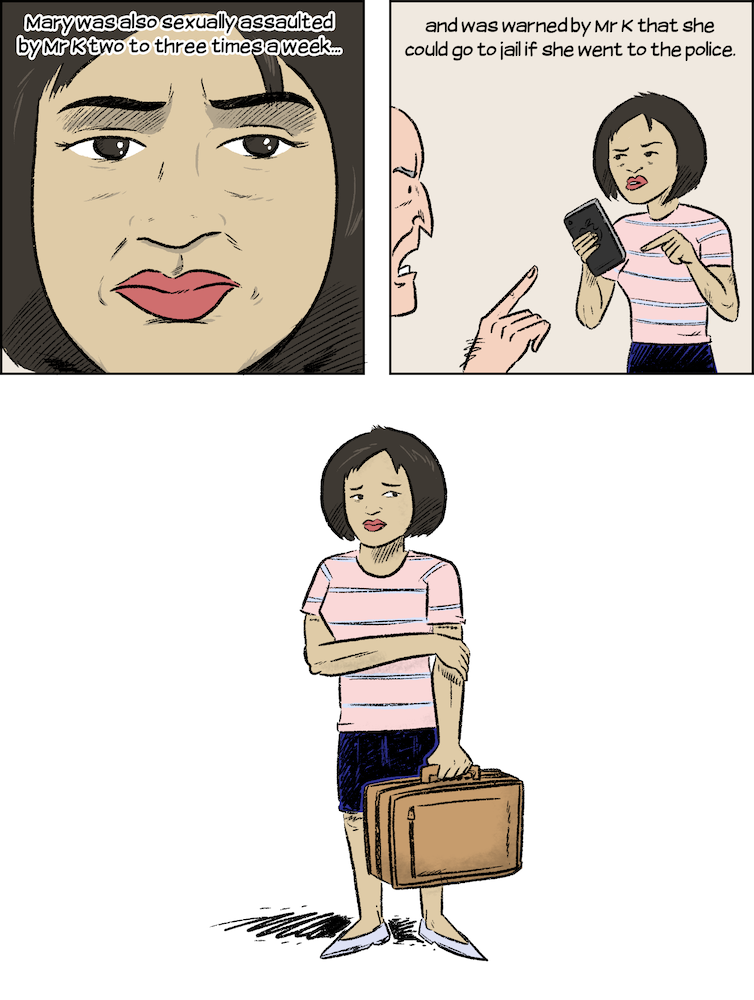 Wes Mountain/The Conversation, CC BY-ND Eventually, with the help of one of Mr and Mrs K’s family members, Mary was able to leave this situation. This example is based on a case that ultimately led to Mr and Mrs K being found guilty of slavery offences and sentenced to eight and four years’ imprisonment respectively. Servitude Servitude is when a person does not consider themselves to be free to stop working or leave their workplace, because of threats, coercion or deception; and the person is significantly deprived of their personal freedom in their life outside of work. 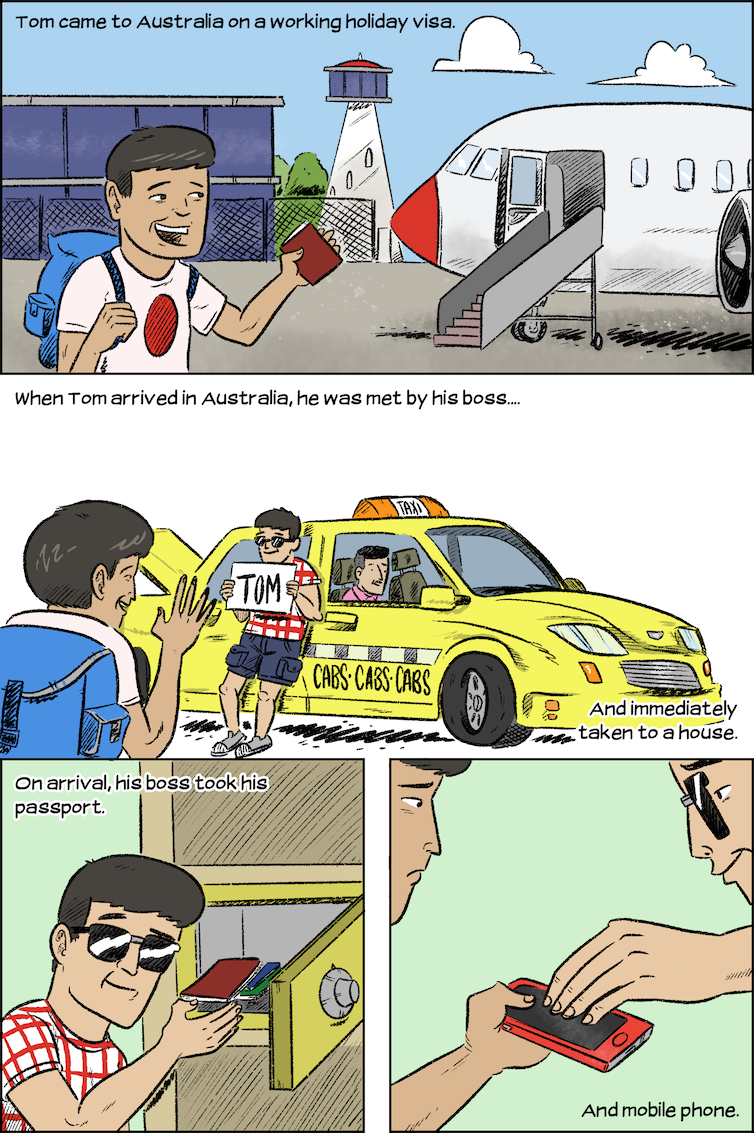 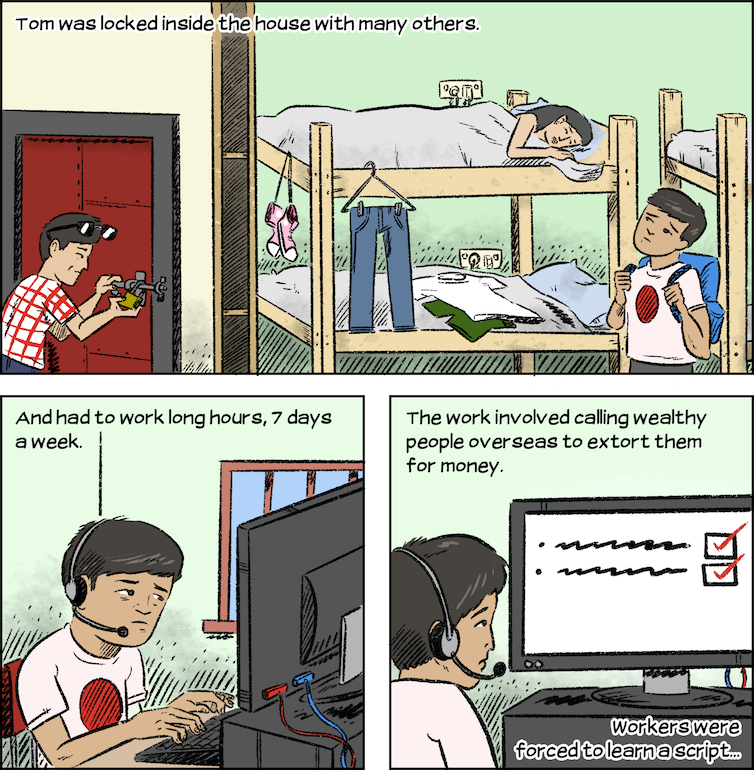 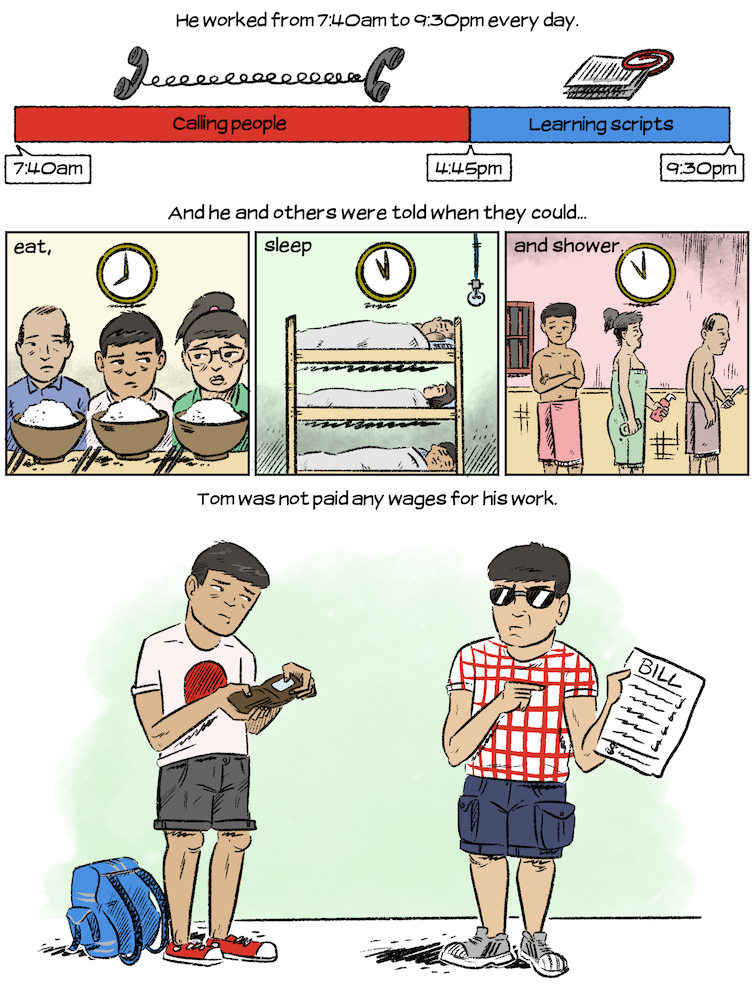 Wes Mountain/The Conversation, CC BY-ND Eventually, Tom managed to escape from the house, flagged down a motorist and contacted police. Police responded and found 49 other exploited people who had been coerced and controlled. This example is based on a case that led to two people being found guilty of causing a person to enter into or remain in servitude and sentenced to three years’ and two-and-a-half years’ imprisonment. Forced labour Forced labour is when a person does not consider themselves free to stop working, or to leave their workplace, because of threats, coercion or deception. 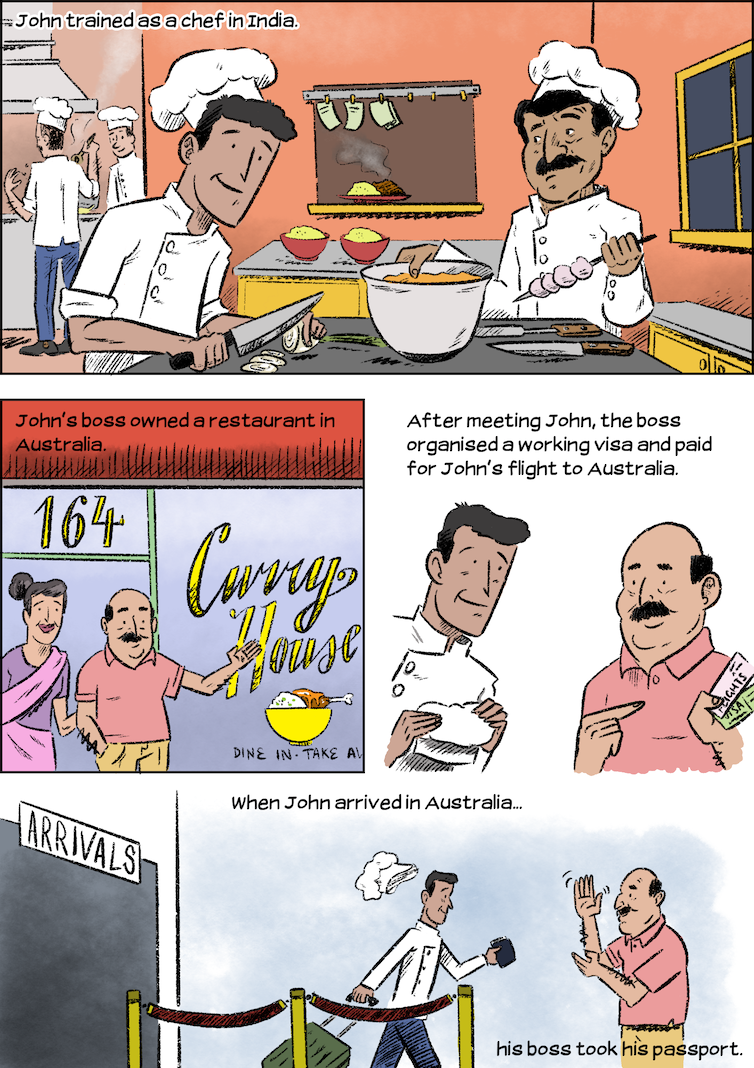 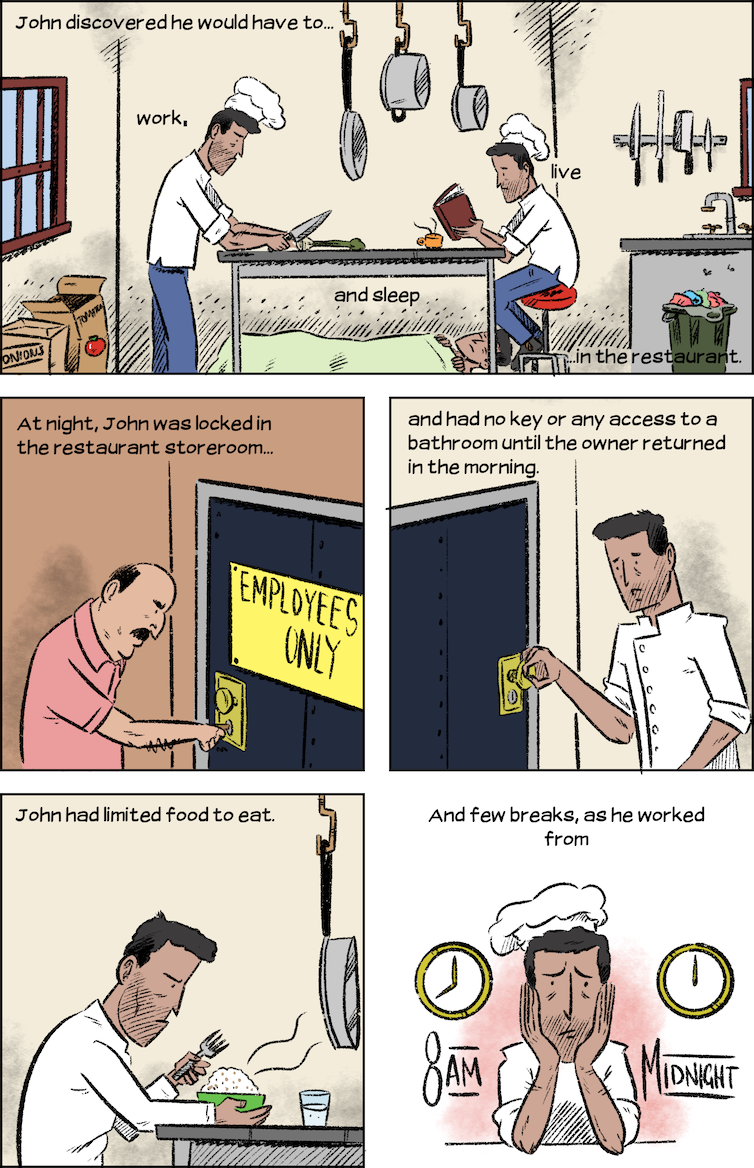 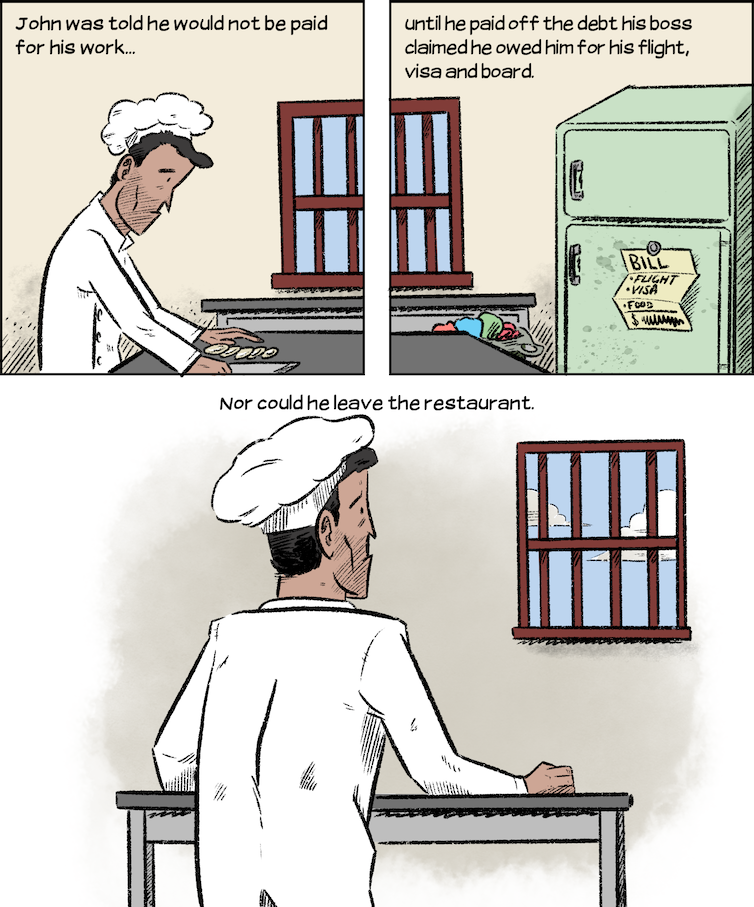 Wes Mountain/The Conversation, CC BY-ND Eventually, John was able to get help, but he was in very poor health and died a few years later. Forced marriage A forced marriage is when a person is married without freely and fully consenting because of either coercion, threat or deception. It could also be because they’re incapable of understanding the nature and effect of a marriage ceremony, possibly because of their age or mental capacity. A forced marriage is different from an arranged marriage or a sham marriage. The main difference is that there is consent in arranged and sham marriages. 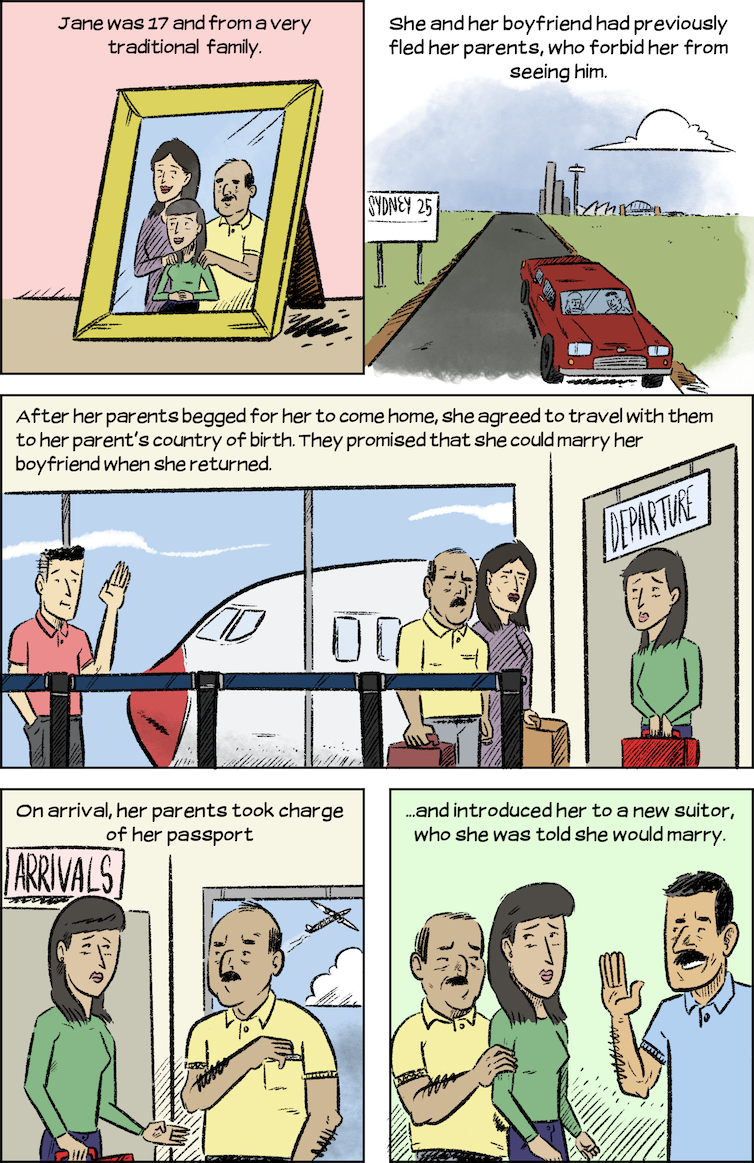 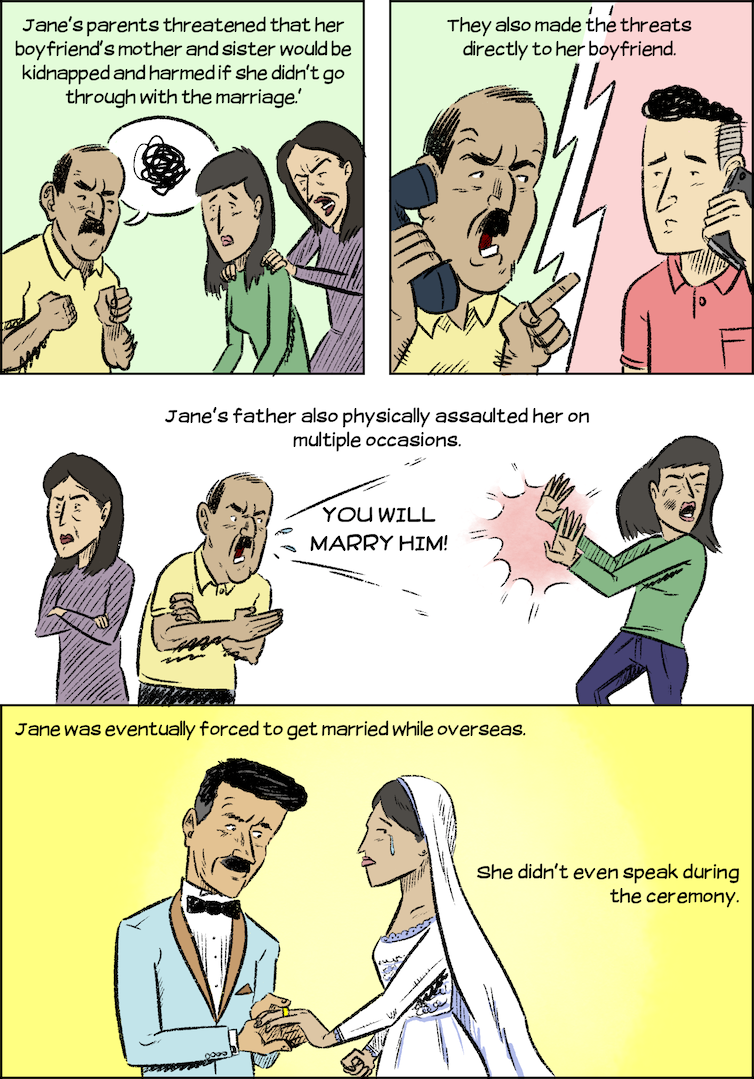 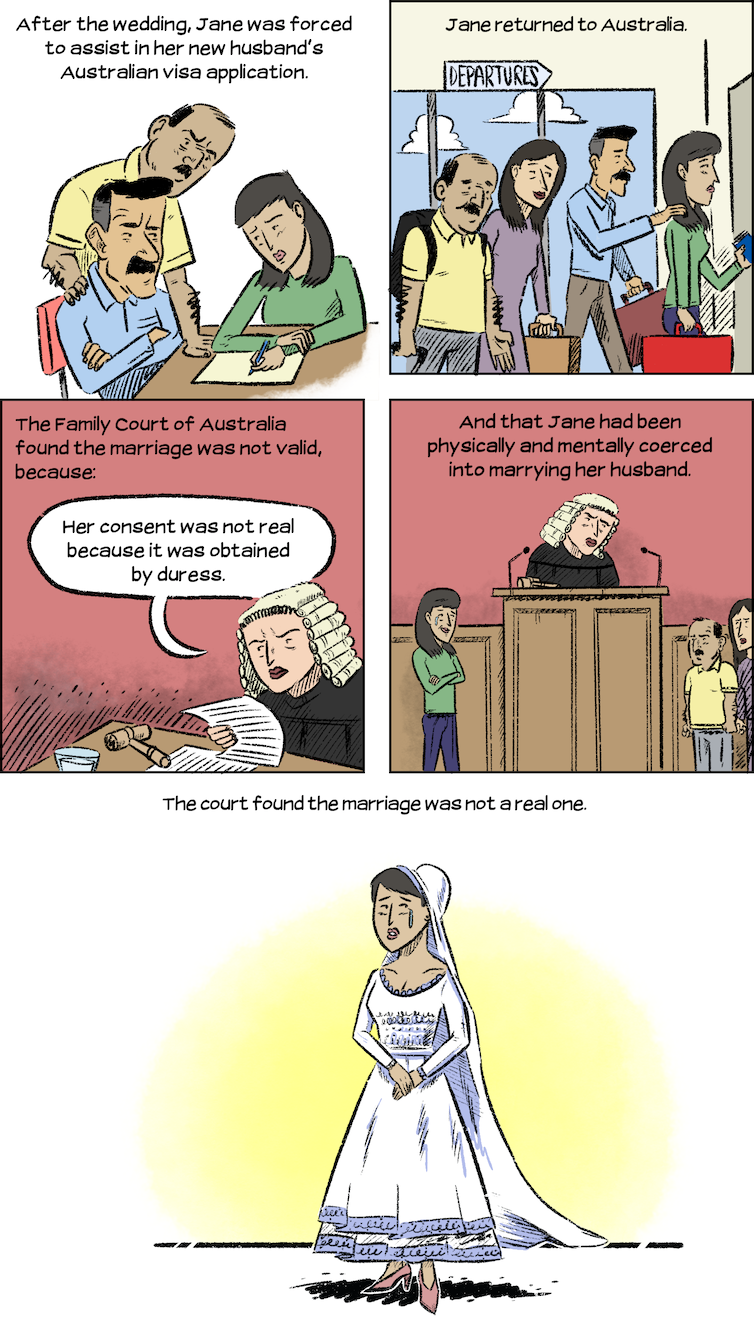