The Coalition is likely to win 19 of the 40 Senate seats up for grabs at the 2019 election. As they hold 16 of the 36 that are not up for election, they will probably have 35 of the 76 total seats (up four since the pre-election Senate). The new Senate sits from July 1.

Labor is likely to have 26 total seats (no net change), the Greens nine (steady), One Nation two (steady), the Centre Alliance two (steady). Cory Bernardi was not up for election, and Jacqui Lambie regained her Tasmanian seat following her disqualification on Section 44 grounds. While One Nation lost a WA seat, they probably regain Malcolm Roberts after his disqualification.

The likely losers were Fraser Anning, Derryn Hinch, the Liberal Democrats, Brian Burston (who had shifted from One Nation to United Australia Party), and Tim Storer, who did not contest his SA seat.

The Coalition plus One Nation and Bernardi is 38 seats for the right. To pass legislation opposed by Labor and the Greens, the Coalition’s best path will be these 38 votes, plus either Lambie or the Centre Alliance.

With six senators to be elected in each state, a quota is one-seventh of the vote, or 14.3%. With two to be elected in each territory, a quota is one-third of the vote, or 33.3%. Voters are instructed to number at least six boxes above the line, or at least 12 below, though only one above or six below is required for a formal vote. All preferences are voter-directed.

The Senate count is now at 84% of enrolled voters, while the House count is at 91%. The last few percent in the house count have been good for the Greens and bad for the Coalition, but this is unlikely to make a difference to the Senate seat outcomes. Senate results will be finalised by a computer preference distribution, probably by late next week. 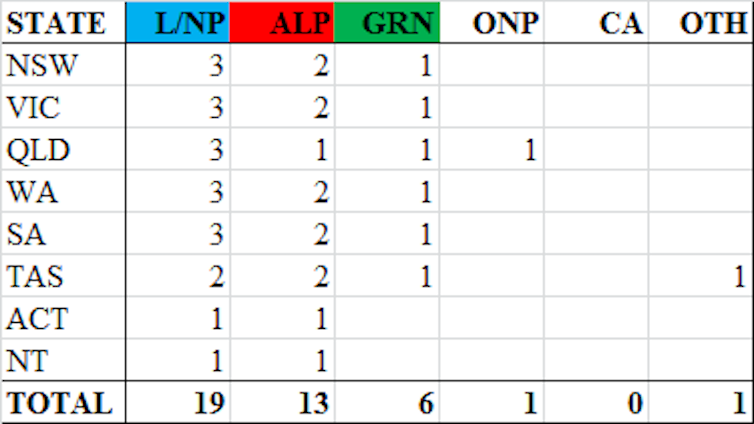 In NSW, the Coalition has 2.70 quotas, Labor 2.10, the Greens 0.60 and One Nation 0.34. Labor preferences should assist the Greens, with One Nation too far behind to catch either the Greens or Coalition. Both Labor and the Coalition gain at the expense of the Liberal Democrats and Burston.

In Victoria, the Coalition has 2.54 quotas, Labor 2.19, the Greens 0.73 and One Nation and Hinch Justice both on 0.19. The Coalition appears too far ahead of everyone else to be caught. The Coalition is likely to gain at the expense of Hinch.

In Queensland, the LNP has 2.75 quotas, Labor 1.59, One Nation (Roberts) 0.71 and the Greens 0.68. Whoever finishes last out of the final four after preferences misses out, and that is likely to be Labor. The LNP and One Nation are likely to gain at the expense of Labor and Anning.

In the NT, Labor has 1.11 quotas and the Country Liberals 1.10. Preferences are not required for either seat. There will be no change.

The reason for the right’s three-seat lead over the left is Queensland, where six of the 12 senators are likely to be LNP, One Nation two, Labor just three and the Greens one. All other states are likely to split evenly between the right and left, except for Tasmania (6-5 to the left plus Lambie). SA is tied 5-5 with two Centre Alliance.

The table below shows the seats up for election at the next half-Senate election, due by early 2022. While state senators have six-year terms, territory senators are tied to the term of the House. 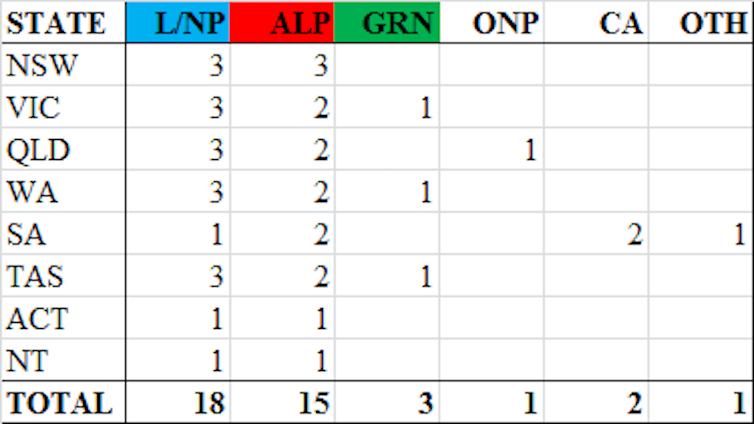 The Coalition will be defending three seats in every state except SA, where they are defending just one seat. A bad Coalition performance would put their third seat in some states at risk. However, if the Coalition does as well as they did in 2019 in the mainland states, and wins a third Tasmanian seat, the Coalition and One Nation combined would have a Senate majority (39 of 76 seats).

The three senators most likely to lose at the next election are Bernardi and the two Centre Alliance senators, all in SA. At this election, Centre Alliance won just 2.6% or 0.18 quotas and Bernardi’s Conservatives had 1.5% or 0.10 quotas.

The Greens will be happy with their defence of the six senators they had up for election. A similar performance in 2022 would give the Greens 12 senators – the most they have had. But Labor needs to improve greatly to give the left a chance to gain the four senators they would need in 2022 to control the Senate.

Another explanation for the Coalition’s vote jump in the Senate is that those with a lower level of educational attainment disliked both Malcolm Turnbull and Bill Shorten in 2016, and were thus likely to vote for other right-wing parties. In 2019, these people liked Scott Morrison. There are many parties to choose from in the Senate, so the Coalition’s higher vote should be seen as an endorsement of Morrison.

In the House, the Coalition’s vote is down 0.5% from 2016. Far fewer right-wing parties stood for the House in 2016 than in 2019, so voters’ choices were more limited in 2016. If the same sorts of candidates had stood in the same seats at both elections, the Coalition’s primary vote would probably have increased in the House too.

Turnout for House increases on 2016

Contrary to this article in Nine newspapers that suggested turnout had fallen to its lowest level since compulsory voting was introduced, official turnout for the May 18 election is currently 91.07%, up 0.06% from 2016. There are many votes outstanding, so turnout will increase further.

As the electoral roll is more complete than it has ever been, this increase in turnout is more impressive than it seems.

It is likely that Labor will hold Macquarie, the last seat in any doubt. That will give the Coalition 77 of the 151 seats, Labor 68 and six crossbenchers.

I wrote for The Poll Bludger that at the UK’s European Union elections held on May 23, the Brexit party won 32% of the vote and 29 of 73 seats, the Liberal Democrats 20% and 16 seats, Labour just 14% and ten seats, the Greens 12% and seven seats, and the Conservatives 9% and four seats.

Theresa May will resign as Conservative leader on June 7, and the next PM is likely to be a hard Brexiteer.

In the European Union overall, the Liberals and the Greens performed well.