In recent years, there has been a surge in “female empowerment” stories in the Australian picture book market. This long-overdue movement was largely inspired by the success of the crowdfunded book Goodnight Stories for Rebel Girls, spawning many imitations since its publication in 2016.

In April 2019, I examined the 100 bestselling picture books at Australian book retailer Dymocks: an almost 50/50 mix of modern and classic stories (the majority being published in the past five years). I discovered that despite the promising evolution of the rebel girl trend, the numbers tell us that picture books as a whole remain highly gendered and highly sexist. Worse – female protagonists remain largely invisible.

Sixteen books in the list showed characters in specific occupations (outside of parenthood). In the female-led stories, protagonists only showed ambition for traditional feminine pursuits. There were three ballerinas, three princesses and one fashion designer - Claris, a mouse, who “dreamed about clothes” and “read about handbags in Vanity Fair”. (In this story, a misbehaving girl is also chastised for being “neither proper nor prim!”)

In comparison, the male-led stories showed protagonists in roles ranging from farmers and chefs to zookeepers and scientists.

Not much has changed in the past 20 years. A 1998 study found there were four primary occupations for female characters in picture books – scullery maid, daughter, princess and mother, while there were ten for males – which included detective, aircraft inventor and knight. 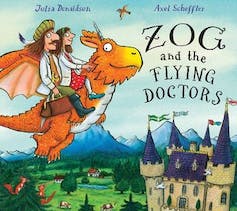 Goodreads Zog and the Flying Doctors (2016), one of the books from the Dymock’s bestsellers list, attempts to rectify this gender imbalance, but doesn’t quite manage it. Consider the first line: “Meet the flying doctors – a dragon, knight and girl, their names are Gadabout the Great, and Zog, and Princess Pearl.” Both Zog (the dragon) and the knight are male characters. The human characters are both doctors, and it is later shown that Pearl bemoans traditional princess duties. However, the male lead is a “great” knight, while our female lead is first introduced as a “girl” and then identified as a princess. Of course, there is nothing wrong with ballerinas and princesses, nor with celebrating femininity. What is problematic, however, is the lack of other roles presented to young girls. When there is little variety in female-led stories, and female ambition is restricted, picture books become part of a bigger problem. Read more: Friday essay: the feminist picture book revolution Mothers and fathers Parental roles are also represented in largely conventional ways in picture books. In a 2005 study of 200 picture books not a single father was shown kissing or feeding a baby. While mothers were always shown as active parents (feeding, holding and caring for baby), fathers were rarely shown performing parenting duties. In my study, mothers were similarly shown as much more active parents, but also much more cautious and serious than fathers. No One Likes a Fart (2017) is a good example of this: a mother sits daintily on the couch next to a stack of books, drinking tea. The father stands with the remote control in his hand when he farts. “Do you have to?” the mother asks crossly, as he laughs. Fathers are portrayed as sillier and more easy-going than mothers – but fathers are also often shown to be less engaged with raising their children. For example, in the classic Australian picture book Edwina the Emu, part of the comedy is meant to come from Edwina’s partner Edward’s reluctance to be a parent (“You must be joking!”) and subsequent difficulty and annoyance in caring for his eggs (“‘You’re late,’ muttered Edward, ‘and I need a rest’”). 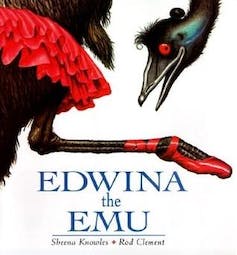 Goodreads Where are the girls? Perhaps most worrying of all is how little female characters are represented – male protagonists are far more common. A recent study showed that of the top 100 Australian picture books published in 2017, it was more common for a book to have no lead character than a female lead character. Characters with speaking parts were also much more likely to be male, and 31 of the books had all male characters while only six had all female characters. Male protagonists have long been the default in picture books. Consider favourite protagonists like Max from Where the Wild Things Are, Spot the Dog, Peter Rabbit and Hairy MacLary - even the Very Hungry Caterpillar is a “he”. This is common throughout picture books: a character may be an animal or creature and not even have a name, but will most likely be referred to as a “he”. Even the Very Hungry Caterpillar is a ‘he’.Of the books in the Dymocks bestseller list, 24.6% had either all male characters or used all male pronouns – even when characters weren’t human and had no discernible gender. Conversely, only one used all female pronouns and there were no books with all female characters. How we tackle gender in picture books is important, as they help inform children’s understanding of the world and themselves. Courageous girls and loving fathers should not be radical concepts, nor do we need to continue dividing gender so severely: girls can be sweet and brave with scientific minds, boys can be adventurous and kind with a penchant for tea parties. None of these traits are defined by gender. It’s time we stopped limiting the things that kids can be.